Oakland-based Anna Petrisko sound-collages imagined jeepney soundtracks in her experimental music project called Jeepneys. Jeepneys are also vehicles that originated from United States WWII army jeeps abandoned at the end of the American 48-year occupation of the Philippines. Filipinos/Filipinas, including Petrisko’s family, decorated the discarded jeeps-turned-jeepneys, recycling them for public transportation. Much like her ancestor’s creative reusing, Petrisko’s tracks are built on layers of imaginatively used and reused sounds like transduced beats made by amplified thrift store necklaces. 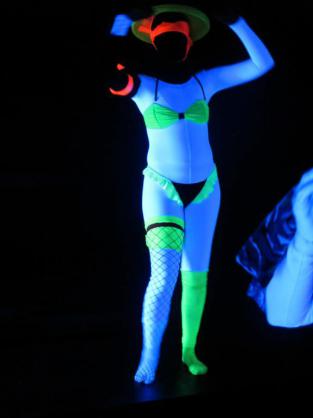 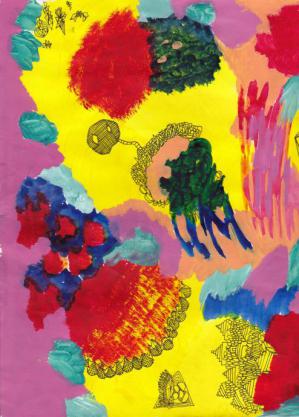 In addition to audio, Petrisko’s work incorporates movement and visual art. The image on the left is a video still from an upcoming collaboration between Jeepneys and Lovewarz, on the right; a 2D work entitled Alien Portrait, Julajuoi.

Tap dancing rhythms across a contact microphone’s conducted path, Petrisko’s Jeepneys are a sound adventure that will delight fans of the experimental. I caught Jeenpeny’s performance at this year’s FOC (Females of Color) Fest in Portland, OR (check out Kjerstin Johnson’s post!) and it was the best show I’ve seen this year. In fact, I was so giddy after Jeepney’s set that I ran across the street to buy a recording and startled Anna, causing her to close a record in her car door! Needless to say these noisy dance songs are superb enough that a CDR is worth a slippery run in the streets. If you’d rather stay dry and order a copy of Jeepney’s self-released full-length “beep beep” on tape or CDR, email: jeepneysbeep@gmail.com. 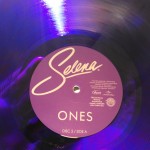