Kat Edmonson makes warm, hand-holding love songs that hearken back to smoky 1940s lounges or swinging 1960s girl groups, with simple lyrics and arrangements that keep her message accessible and sweet. And now that it’s almost summer, the breezy, throwback pop which makes up Edmonson’s sophomore album Way Down Low is exactly what the doctor ordered. Read after the jump for an interview with Austin native Edmonson on music, writing, champagne, and birth doulas (!!). Bitch: What is your musical story?
Kat Edmonson: Chapter one…  Well, I was raised on the American songbook.  I guess, from what I hear, it wasn’t necessarily the norm.  Classic movies and musicals were the soundtrack to my childhood.  Of course I eventually got into contemporary music, especially around my girlfriends, but I grew up with just my mom, and around the house she exposed me to all of the classic Hollywood movies and musicals.  We were constantly watching Fred Astaire movies, Judy Garland, Gene Kelly.  Songs by Cole Porter, and Gershwin, and really just popular songs from movies and musicals—these were my musical influences.  And I found myself fantasizing, as a child, about becoming an adult and living the life I saw in these movies!  I was very disappointed to eventually find out that not everyone was dancing and singing their way through life’s ups and downs.

One of the singles on Way Down Low is “I Just Wasn’t Made for These Times.” Your album certainly hearkens back to times other than these. If you weren’t made for these times, what times were you made for?
Thanks!  I certainly was trying to write and curate songs that could feel classic, but the spirit of the record is very much what I’m feeling right now, today.  With this album, while it was a celebration of a sort of classic aesthetic, I came with a strong sense of where I was in my life, both personally, and musically.  I was so fortunate to work with the great Al Schmitt, and Phil Ramone as well, who have contributed so much to the history of recorded music, I wanted to allow their influence on the process.  I really felt emboldened to try to create something worthy of their vast expertise.  To me that meant allowing myself and my band to, for lack of a better term, lose track of time, and get lost in the character of each song.  When people say the record sounds like it’s from another time, I hope what they mean is that it’s a record that they’d want to listen to from time to time.

So, you and champagne clearly have some stories to tell, if it got a whole song on the album…
It’s true, just like in the song, champagne did get the best of me one night!  I woke up the next day, after that particularly bubbly night, and felt, well, awful!  But I very quickly decided that I wasn’t going to stand for this degradation. So I wrote the skeleton of the song, “Champagne,” that day.  It’s part lament, and part tribute, as I swear I’m never going to drink again, while secretly feeling grateful for the experience that led to the song.

What are your favorite subjects to write about? Do you write about characters, generally, or yourself?
This record features many of my own songs, and the experience has been a dream come true of sorts, because actually, I didn’t always feel confident of my songwriting abilities.  Coming to music as a vocalist, and without formal training, I wasn’t always sure that I could write chords, or arrangements.  I wasn’t sure how to express to the band what I wanted.  I really have always heard music that way though—fully orchestrated, and with all of the instruments.  Once I got over my fears, it was a quick acclimation to showing the band, and getting things down on paper and to memory.  Of course now I am so excited to write more.

The subjects on this album were born of my experiences, but there’s a good degree of imagination, and storytelling involved as well.  As there should be!  Otherwise, it would probably be a pretty boring song!

Here in Austin next month, you’re the headliner for a benefit for Giving Austin Labor Support, a volunteer group of birth doulas (of which I’m a member!). What’s your connection to the doula community?
I went to high school with Caroline Byrd, one of the founding members of GALS.  Caroline reached out to me for support and I was more than happy to help as I find it to be a wonderful organization!

Bitch Media is “A feminist response to pop culture.” What does feminism mean to you?
To me, being a strong person, and indeed a strong woman, means not letting anyone else dictate who you are.

What are you watching/reading/listening to lately?
I just recently bought the new Dr. John Locked Down record as well as Lee Fields’s new album, Faithful Man.  I’m also really digging on Justin Towns Earl—I’ve finally come around to checking him out.  I don’t actually have a TV but I do watch re-runs of The Cosby Show online.  And, as far as books go, I’ve been reading one published in ‘53 called Blue Trout and Black Truffles by Wechsberg.  I like to read about food.  :)  I love most things food—reading about it, talking about it, eating it, cooking it, looking at it.  Whatever!

Want a little more Kat in your summer day? Here’s the music video for “Lucky,” complete with infinity wistful gazes, sundresses, and fireworks!

Previously: “We’re Making Music Because We Have To”: A Q&A with Grass Widow, First Aid Kit, Folk-Music Sister Act

Was impressed for a few minutes, but then reality has a nasty habit of pointing to specific sources where you just know you've heard this all before, albeit not as anticlimactic or disappointingly in the form of an explicit musical cliche. (Tammy of course, did ring a bit truer) 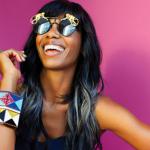 by Amy Lam
Turn up the volume and do some decompression, friend.