B-Sides: Laetitia Sadier's New Album is as Political as it is Pretty | Bitch Media

B-Sides: Laetitia Sadier's New Album is as Political as it is Pretty Laetitia Sadier, who some may know as the bilingual frontwoman of ’90s indie-rock band Stereolab, just dropped her second solo album, Silencio, a couple weeks ago on Drag City.

Sadier’s vocals were one of my favorite things about Stereolab, always melding perfectly with their synth-driven songs, still bright and melodic while hitting minor or dischordant notes. Stereolab fans will not be disappointed with Silencio (Tim Gane, Stereolab’s other front person, joins the album as well). The album has plenty of atmospheric pop songs, washes of sound carried by guitars and bossa nova beats, English and French lyrics over synth and moog-y notes. It’s half lullabies, half era-defying dance jams.

The video for the opening track, “The Rule of the Game,” captures a lot of what’s going on with the album music-wise. Hazy, mellow, and good for weather where it’s so hot you can’t move, just let the heat and sound wash over you. Here’s the video:

But while it’s easy to drift through the album (and I did all summer), there’s a lot more going on lyrically and politically on Silencio.

Take “Auscultation to the Nation” (I looked up “auscultation” so you don’t have to: “The act of listening to sounds arising within organs [as the lungs] as an aid to diagnosis and treatment”). If you stop bopping your head to the brisk beat and pop riffs, you’ll catch lyrics taking our neo-liberalism to task. “What do we care about these self-proclaimed authorities? In the name of what are we letting them govern our lives?” she sings brightly. “They are politically illigitmate” she parses out prettily. “Agencies, financial markets, and the G-20s were not elected by the people…. We want a real democracy.”

It took me weeks to pick up on the anti-State lyrics—which could be a testament to my ability to take in pop music at the expense of political messages, but also shows just how Sadier bridges both so well. She’s making music with a message.

At the end of “Auscultation,” the song devolves from the bright tune into experimental sounds, fuzzy guitars battling strange beeps, like a hardrive or market (or regime?!) crashing. But the next thing you know, you’re back to floating on ethereal synth clouds with “There Is a Price to Pay for Freedom (and It Isn’t Security).” Once again, the song is a dreamy, trip-worthy journey with lyrics that tackle consumerism, the Bush adminstration, and complacency.

Silencio may be an unexpected post-Occupy soundtrack (and it sure beats drum circles), but it’s one more people should embrace. “I don’t see why politics should exclude beauty,” Sadier told Interview, which is exactly what you get on Silencio. Preview more of the album over at Drag City, and if you’re in the United States, keep an eye out for her fall tour dates. You don’t find anti-capitalism in many songs these days, especially camouflaged in such lovely songs as on Silencio. Shhh…just listen.

Previously: Still Stompin’ Strong—the Glorious Return of Tilly and the Wall, the Goat and the Feather 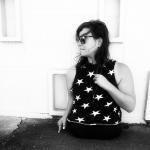 by Grace Manger
Mindie Lind is a musician, performer, and a cripp activist in Seattle. We talked with her about identity and reclaiming words.