Social Life (Last Bummer Records), Making Friendz’ first album channeling punk, ’80s pop, and R&B through a lo-fi filter, is a great time whether you’re sharing it with your crush de jour or or having a lone sing-along pining sesh in your bedroom.

With lyrics like “Don’t want to hurt nobody/just want to touch your body” (“Situation”) and “Don’t make me cry, I just want to be inside you” (“Don’t Make Me Cry”), Tami Hart’s songs are less about love and more about friends with benefits, and her beats are sharp but have a sloppy fuzziness that adds to the party appeal. This isn’t cold, electronic-driven pop, Hart’s inflections (and goofy flourishes from the 80s–cheesy synth takes on a new sincerity when it’s about getting in someone’s pants) give it warmth and personality that brings together dancefloor fun and hardcore longing. Take, for example, the sexy-dirty-scary yoga going on in the video for “Situation” (below), emphasis on the dirty-scary. There are projectile-vomit fights in the following video, is what I’m trying to say. Click here for an mp3 version of “Situation”.

One of my favorite songs is “Something to Believe In,” where Hart’s former bandmate Daniel Scott Erickson takes lead on vocals to sing about risky love. It has a masterfully mixed backbone of cowbells, chunky beat, and a thriving bass line. (On a side note, Making Friendz is clearly into internet speak with songs like “Yr Shadow,” “Luv Cruizin,” “Sexual Forestz,” not to mention their very band name, that I can just totally get behind.)

But the coup de Social Life is the last track, “All I Wanted 2 Do,” an epic slow jam where the synth organ is laid the fuck on to convey the sentiment “All I wanted to do was get to you, baby.” Tami really puts the Hart in heartache, is what I’m trying to say. Opening with “Girl I got time/and I don’t mind/waiting round while you think of leaving me behind,” this is a totally lovesick lament, that perfect song for the break-up mix CD that you know you can’t actually give your ex. The song climaxes (pun entirely intended) with Erickson crooning “All I want to do,” Hart beckoning “Girl I don’t mind,” and moans that could pass for either the orgasmic or the inconsolable, all of it driven by that consistent organ synth that just won’t let up.

Hart’s musical career actually began almost a decade ago, when she sent tapes of her acoustic songwriting nonstop to Mr. Lady records. She was eventually signed and released her first record when she was 19, gaining acclaim from Out and the New York Times. In a recent interview with After Ellen, Hart describes her musical career as a kind of alternative kind of higher education, leaving a conservative and homophobic environment in the South to going on tour with a myriad of folk, punk, and noise bands. She now plays bass with MEN, and is excited to be the queer band pulling into the small town, the kind of thing she used to live for. Read the full interview here, and visit Making Friendz MySpace here.

That cracked me up. I love it.

What a quote on the guitar: "I miss the way kids used to play it." I can't remember if she was playing air guitar at that point. I think she was. I think she rocked it.

Smelling salts please, I feel a purchase coming on. 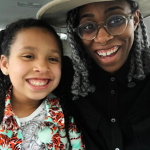