MYTHS is a band that makes me like living in Vancouver. Nicknamed No Fun City due to the near extinction of live music venues, post-Olympic broken promises of affordable housing by municipal government, and recently rated the most expensive city in North America...there is, well, a lot to dislike about Vancouver (sigh, I miss Portland). Well known for producing hook-soaked indie pop (double sigh), Vancouver's scrappier self-made experimental music community has crowned Lief Hall and Quinne Rodgers our queens.

Since forming in 2010, the women of MYTHS have written and produced a live electronic opera, The Golden Dawn, (best described using a long line of exclamation points), released a seven-track self-titled album, and co-directed the video below that would make Planningtorock proud.

WARNING: Video may not be safe for viewers with photosensitive epilepsy.

The electroccult duo's live sets are like handmade multimedia worlds—expect synths, blacklit paper mache forests, interpretive dance, kaleidoscopic costumes, and animation; but mostly, to be smashed to smithereens by Hall and Rodgers' vocal (dis)harmonies. In September, MYTHS will be kicking off a US/Canada tour with Grimes and Elite Gymnastics. Go!!!!!!!!!

Previously: Waxahatchee for the Changing Seasons, In Defense of New Jersey, Screaming Females 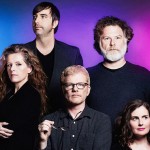 by Jude Watson
In the dark timeline that we’re currently surviving day to day, any music that doesn’t even briefly allude to current events can feel out of touch.