• After a string of EPs and self-released singles, Brighton’s Peggy Sue finally have an LP out!!….. in the UK. Fossils and Other Phantoms will be released in the US in June, but if you’re in Europe, you can probably see this soul folk wonderfulness live! Multi-instrumentalist original members Rosa Slade and Katy Young have absolutely gorgeous voices, and their live shows are supposed to be amazing. If you’ve never heard Peggy Sue (formerly Peggy Sue and the Pirates), start off with Body Parts & First Aid (two EPs put together on one record).

• Critically-acclaimed San Francisco black metal band Ludicra released their newest album The Tenant in March and began a month-long tour to promote it. On the second day of the tour, guitarist John Cobbett was hospitalized in Olympia, WA for a ruptured appendix. The band decided to continue their tour, raising money for their (uninsured) bandmate along the way. You can donate to Cobbett and Ludicra through their record label, Profound Lore.

• Electrical violinist Caitlin Moe lists Dmitri Shostakovich and Fiona Apple among her influences, and her country-tinged, smoky-voiced pop tunes reflect those artists perfectly. 21-year-old Moe trained as a classical violinist but got so interpretive with her repertoire that she began writing her own unique tunes, which she spent most of 2009 playing at raves, clubs and parties around the country. This isn’t what you think of when you think of violin music: Moe is a stirring, energetic performer, pulling shapes and backbending like a stadium rock goddess. Watch for Moe’s full-length record, set for release later this year, or check out her EP on iTunes.

• Sleater-Kinney’s Corin Tucker talks to the Portland Mercury about her upcoming solo album – her first release of new material since Sleater-Kinney went on hiatus.

• Futuristic pop punks The Epoxies went on hiatus in 2008, but are reuniting to play a benefit show in Portland on May 29! 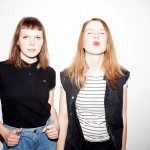 by Katie Presley
Gurr's surf rock perfectly captures the essence of driving on a long stretch of road with the windows down and your best friend riding shotgun.