Don’t let the picture fool you–Sabrina Chap’s forlorn album cover of Oompa! doesn’t reflect what inside: bouncing rhythms, complex instrumentation, and intelligent lyrics covering everything from heartache to performing femininity. And lest the title makes you think you’re in for another Bohemian revival act à la Gogol Bordello or Dresden Dolls, once you being her debut album, it’s quickly revealed that Chap is skilled in more than a few genres, including jazz, pop, and swing–the last of which is most clear with the the rousing, upright bass and strong vocals that break the album open with “Blueprint of Destruction.” Classically trained in piano, Chap had a folk career until she discovered ragtime, an influence that shines throughout Oompa!

The fiddle-heavy “Carolina” is one of my favorite tracks, whose country sound stands out in a good way. Chap’s got a strong voice that carries an expressiveness she’s not afraid to exercise, especially on tracks like “Never been a Bad Girl,” below:

If her musicality isn’t impressive enough, Chap is also a feminist writer and editor. The Loud issue of Bitch magazine featured an interview with Chap (well, with Chapadijiev, Sabrina’s full surname) about creative women and self-destruction, the subject of Live Through This: Creativity and Self-Destruction (Seven Stories Press, 08), an anthology she edited. The book was also reviewed in that issue, and features essays from bell hooks, Nan Goldin, Kate Bornstein, and others. She’s also edited the zine Cliterature (good title, even better cover), and has written several plays.

Oompa! doesn’t just show Chap’s versatility as a writer and performer, but a musician as well, as she provides piano, guitar, and “terrible whistling” in addition to her expressive singing. “Boat Song,” which rounds out the album, is one of its best as well, highlighting Chap’s voice and piano-playing skills. Listen to it below…
[audio:/sites/default/files/audio/11_The_Boat_Song.mp3]

The fun, lyrics-intensive, and musically rich album is available June 3rd, and anyone who wants a little bit more..well, oompa! to their singer-songwriters should pick it up! One more reason to dig Sabrina Chap is that it’s available for a sliding-scale price on her website.

Oh, I love this record!! I m so happy to see it here on your web site.
Love from Berlin!
Ena

And along comes a bunch of songs that just get better the more you listen to them. Sabrina Chap is a formidable talent - multi-talent. Ok, you can't pin down her musical style; but it's not a case of something for everyone in this album, so much as making every track utterly compelling and persuasive to anyone. Her oomph is so infectious and her wit is wicked, but, Boy, you should see her Live. Bitch, too - go see her Live. Now, that's exciting.

I don't consider myself musically sophisticated -- I may or may not have listened to a '90s boy band today -- but I really enjoyed both of the songs here. They're lively enough to tap into my pop inclinations, yet interesting enough to engage my brain. Thanks!

sweet instrumentals - bobcat on the voice - just turned on - making it work like the girls on 56th street....
a circus it shall be 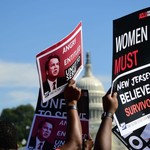 by Bitch HQ
The resistance is just beginning.