Even though August showed up faster than product placement on Bravo, summer’s not over yet, and you can get your sun on with this sampling of bands bringing back garage and surf rock to a town near you…. Best Coast is Bethan Cosentino and Bobb Bruno from California (perhaps you’ve seen or heard her in this Converse ad with Kid Cudi), and their indie album Crazy For You has already seen “Boyfriend” enter popular charts. Some might consider Cosentino’s lyrics simplistic (topics include being in love, waiting by the phone, smoking weed, among other–no wait, that’s about it), but I like the way they sum up those very basic feelings of passionate crushing that aren’t too complex but are very strong, and it’s a must listen for anyone who’s pining in vain (or who loves catchy tunes).
Recommended Tracks: When the Sun Don’t Shine, I Want To

Shannon and the Clams A simple three piece, Shannon and the Clams mix playful punk with the sixties (and they’re buds with Hunx and his Punx!). Their sound drips with surf, with a bit of soul and tinge of rawness. Vocalist Shannon Shaw lets loose with an Etta James wail in “Troublemaker” and guitarist Cody Blanchard croons along.
Recommended Tracks: You Can Come Over, Troublemaker It may sound surprising that this five-piece pop bossa nova group hails from a most un-tropical location, the Twin Cities, but with their careless chords and a vocalist Karen Freire knowing her Astrud Gilberto, they’re an easy-breezy way to pretend autumn’s not around the corner. No full-length out yet, you’ll have to satiate your samba needs by streaming their LPs on their MySpace page or seeing them live with Chelsea Boys this coming month.
Recommended Tracks: Jamba Samba, Iowa’s Got a New Strip Club If you’re looking for more riot grrl than surfer girl, look no further than San Francisco’s Grass Widow. Although their subtle surfer guitar and vocal harmonies conjure the sixties, there’s a distinctive modern edge that reminds you of the Raincoats. Look for their album Past Time out later this month on killrockstars (Hey! Shannon and the Clams are playing at their release party, how bout that!)
Recommended Tracks: Lulu’s Lips, Shadow

This is the perfect mix of bands to listen to as I re-watch Sunday night's episode of <i>Mad Men</i> with the sound off and lust after that California beachfront bungalow...

(OK, I won't really do that, but I do love these recommendations and I do want to go back in time to 1965 and buy that house with the turquoise walls!)

One of my fave unsigned surf-type bands is The Hydes (out of NY). They're a two-guitar + drum outfit (and pretty eccentric) with sweet riffs, insane vocals & a totally cute drummer who you can tell has to work hard not to grin her way through even their most "serious" song.

A Hydes show is definitely on the wipeout side of the surf-music spectrum... you know, crashing and getting eaten by a shark, maybe.

oh my god i LOVE drummers who smile throughout their sets!! and also thanks for the recommendation, I'm listening to them right now.

ears perked up when i saw my name. so i do a lot of product placement. got to pay the bills somehow. now if you'll excuse me I'm off to enjoy a tall, frosty Budweiser. 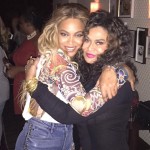