Suzanne Ciani basically had the coolest job ever: As a groundbreaking electronic musician in the seventies, Ciani composed sounds for pinball machines, composed Atari and Coca-Cola commercials, did the sound-effects for Meco’s disco Star Wars theme, and scored The Incredible Shrinking Woman (becoming the first woman hired to score a major Hollywood film). And that’s just how she paid rent.

Ciani was an innovative musician in her own right, as well. And now for the first time, a mix of her early commercial and compositional work (1969-1985) is coming out from B-Music/Finders Keepers.

Lixiviation is a 16-track album that mixes her innovative and fun commercial work with original electronic compositions. The commercial spots include the Coca-Cola “Pop & Pour,” where Ciari simulated a bottle popping open and bubbling into a glass, the hilarious (but amazing) Atari “Liberator” commercial, a deliciously vocoder-ed Discover magazine spot, and my favorite, a PBS news mash-up that mixes sounds of typewriters clacking, phones ringing, cameras snapping, and newcast soundbites that put you in the midst of an imagined newsroom.

But alongside her commercial spots is a beautiful range of original work. You can recognize the retro sound in her work, but it doesn’t sound cheesy or derivative, nor entirely out of place in today’s retro-stalgic electronic scene (see: Ladyhawke, Chromeo, anything off the Drive soundtrack) that uses a milli-fraction of the bytes Ciani did. The other-worldliness sound she creates ends up rather timeless, despite how dependent it was on the software at the time. Her compositions are decidedly electronic, beeping and whirring, yet still conjure natural feelings: ebbs and flows, gradual washes with crisp edges. What I initially thought would make some good “background” music ended up pulling me in with its atmosphere. Preview tracks of Lexiviation here.

Her work is even more fun when you see her in action. In this segment on Omni, you can see Ciani’s equipment and studio, and listen to some of her thought process for composing for the pinball game Xenon—including Ciani suggesting a female voice for the game at a meeting with pinball executives. “It hasn’t been done before,” she suggests. And the narration is awesome: “Her instruments are synthesizers. Her vocabulary, words like reverb, delay, amplitude. She’s written whole scores for movies by touching buttons.”

And here she is hamming it up with Letterman:

And on this 3-2-1 Contact segment (sidenote: I subscribed to 3-2-1 Contact the magazine for probably way too long), Ciani shares some of her sound effects and instruments, and I think she blows the mind of her guest a little bit (but mine would be blown too if Ciani was explaining sound physics to me).

With commercial work as her bread and butter (or “champagne and caviar,” as she once joked), she was able to pursue a solo career and eventually founded her own label, Seven Waves. Ciani went on to record New Age music and solo piano work, and had a hit with “The Velocity of Love,” which seems fitting giving the close tie of physics to her work! Ciani was a trailblazer in the ever-evolving field of electronic music. And like renewed interested in Delia Derbyshire and Daphne Oram, hopefully this release will re-introduce her work to a whole new audience and further her legacy. It’s a month until the release on February 28th, which means you have plenty of time to read up and geek out over more YouTube videos in the meantime. 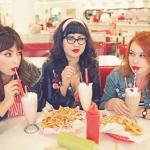 by Amy Lam
A retro surf rock band with a girl-group vibe and Mexican American roots.