The awesome Detroit MC Invincible (interviewed in The Loud issue) has a brand new documentary out about women in hip hop. From Emergence:

The Revival gives a candid glimpse into the first meeting of legendary Hip-Hop pioneer Roxanne Shante and veteran Philly emcee Bahamadia, as they trade stories of their struggles and triumphs in the industry over their long careers. It also shows the exchange of lessons between them and up-and-coming artists DJ Shortee, Eternia, Stacy Epps, and Invincible. This short documentary, a collage of performances and behind the scenes footage, was filmed and directed by Invincible while on the road in Europe as part of We-B Girlz all women in independent Hip-Hop tour. The largest all female Hip-Hop tour of its kind, it spanned over three weeks, six countries, and featured dozens of female artists who performed for tens of thousands of supporters.

How awesome does that sound? Decide for yourself by watching the film!

For more info on the film and to read interviews with the collaborators, check out The Fembassy. Thanks to Samhita at Feministing for posting about The Revival earlier today and thus bringing it to our attention! 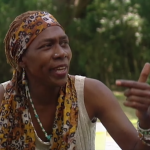 by Robyn McGee
While Shakur may be most popularly known as Tupac’s mother, she was an activist in her own right.