This past Sunday’s extreme, summer heat brought me to a surprise rock show on a river beach where I caught a performance from newly formed, girl-fronted band The Suicide Notes. Nothing gets me in better mood more than some hypno-rocking, three-part harmonies, and this band’s got just that. Plus, the singers wore great matching outfits and black sunglasses, which only added to the appeal. I was transported to a west coast beach party movie where girl groups rule the soundtrack and the crowd busts into an impromptu choreographed dance (figuratively, of course). Shangri-Las + B-52s, anyone? Yes, me please!

The Suicide Notes is a guitar, bass, and drum patchwork of Portland, OR bands led by a trio of female lead singers who harmonize effortless pop/rock vocals on each of their tracks. To be more specific, they describe themselves as “Where Beaches meet Death, The Shangri La’s do it with The Ramones and we end up in your vintage car…” No word yet on any upcoming releases, but songs are available on the band’s Facebook, Myspace, and ReverbNation. My personal favorite so far is “Beach Song,” an upbeat, charging, surf tune about abandoning all worry to go to hang at the, you know, the beach.

Sick of all this end-of-the-summer preemptive nostalgia? Another great song of theirs is the dark and snarky “Suicide Note,” a kiss-off to an ex-lover, friend, or idol. The track wonderfully showcases the group’s vocal abilities, their harmony of “I’ll haunt you for the rest of your life” coming of as both upbeat and creepy.

Relevant: BitchTapes: All the Feels 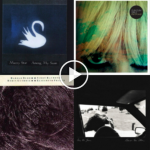 by Claire Breen
Let these female vocalists overwhelm you with a haze of self-reflection.