I did some of my growing up on the island of Maui, Hawai’i, but somehow only came to pick up the ukulele seriously when I was 23 and living in Los Angeles. I’m back in Hawai’i for a little while, and am taking every opportunity I can to sit on the beach and strum my uke while my brother the professional chef sears some mahi mahi for dinner. It’s raining here, and is supposed to for upwards of a week, but this little instrument brings sunshine and aloha spirit wherever it goes. In looking for new songs to play (ps if you have ideas, leave them in the comments and I’ll IOU a Youtube video when I learn it!), I realized that EVERYONE AND THEIR DAD is now playing the ukulele, and Youtube is basically used at this point exclusively for cat videos and people playing ukulele versions of Regina Spektor songs. It’s the instrument of the people. So I thought this week, in the spirit of these islands I love, I would do a sampling of the best the uke has had to offer in what seems to be a full-blown Ukulele Revolution.

Most of the ukulele you find on Youtube right now is cutesy and quirky and hipster in nature (I’m just waiting for it to show up on Portlandia…), but some of my favorites are simple, lovely covers of unexpected songs. This is an example of that flavor, and it’s also a really good one for folks new to the uke.

Next up: What do Toto, Africa, New Zealand, and Flight of the Conchords have in common? You guessed it: THE UKULELE! Bret McKenzie, of Bret and Jemaine fame on FotC, is part of the Wellington International Ukulele Orchestra, and they did this excellent cover of “Africa,” one of my favorite songs of all time even BEFORE I heard this version.

No ukulele list is complete without Iz. Full name Israel Kamakawiwo’ole (the w’s are pronounced like v’s, if that helps…), he was a legend of the uke, and his mix of Somehwere Over the Rainbow and What a Wonderful World still gets played at weddings, funerals, luaus and beach parties every day, everyhwere. Also the first song I ever learned to play on the uke. RIP, Iz. You were, for awhile, the voice of Hawai’i.

I would also be remiss if I didn’t include Jake Shimabukuro on this list, and I’ll tell you right now it’s not really fair to anyone else I include. When Jake plays ukulele, it’s not even the same instrument I play. He finds chords I didn’t know existed. You look at this little instrument, and you see four strings and two octaves, and then you watch him play. AND THEN YOUR BRAIN EXPLODES.

If you needed to pause the video and take a break starting around 3:00, I understand. I do too. Every. Single. Time. Jake is kama’aina, Hawai’ian born and raised, and he’s been playing since the age of four. “The ukulele is the instrument of peace,” he says, “and if everyone played the ukulele, the world would be a better place.” If I knew how to say “AMEN” in Hawaiian, I would.  His new cd, out this year, is appropriately called “Peace Love Ukulele.”

Speaking of a whole bunch of excellent words all put together: how about this bunch: feminism, smut, folk, ukulele. Yeah? How about some feminists playing some smut-folk on the ukulele? I thought so. Meet The Femme Uke:

And that is the best way I can think of to end this post. That’s what the ukulele is all about. Pick it up, learn a few chords, write a song about sexually explicit material if you want, and everywhere you go, if they aren’t freaked out by your lyrics, people will smile. And then play it until you’re 103, like Uncle Bill. It’s the magic of the uke. Might not be what our Hawai’ian forefathers had in mind, but it’s all da kine to me.

What about Honolulu's own Taimane Gardner? She does things with a ukulele I didn't even think were possible. Observe and judge for yourselves: http://www.youtube.com/watch?v=EqaL-ZBEFgM

And of course this one:

because I love this more than those two very feminist, intelligent uke songs? :

I love the Fully Sick Rapper! From now on I can only be addressed as a Kill Bill-werewolf-alien-monster-vampire.

Since I received a build-your-own Ukulele kit for my 30th birthday, I've been keeping a list of songs I'd like to learn. Now that the instrument's almost done, I'm stoked to start finding potential arrangements. Sadly, though, I'm at work and my notebook with the song list is at home! I do have a few for ya...

"Whale of a Tale." As sung by Kirk Douglas in "20,000 Leagues Under the Sea." SUPER-cute and catchy beyond belief.

"If I could Be with You." An oldie known to me as sung by Kay Star with the Capitol International Jazzmen. Charming to the nth.

There is, of course, the song that Marilyn Monroe sings with her uke in "Some Like It Hot..." "Runnin' Wild," or something like that?

The Femme Uke is awesome!

Basia Bulat is an amaaaaaazing musician out of Ontario and she frequently rocks the uke - check it out! 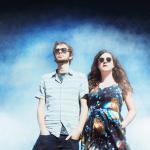 by Sarah Mirk
After she broke both her elbows, pianist Kaila McIntyre-­Bader turned to a new medium: synthesizers.