Pepa of Salt'n'Pepa's Let's Talk about Pep, a new VH1 reality show billed as a "Black Sex & the City," debuted last night. Here's Pepa's take on it, did anyone else catch it? (In way less-glamourous news about hip-hop women being on reality tv, Lady Soveriegn is slated for Celebrity Big Brother. She will be housemates with Sisqo. [Stereogum]).

• Sharon Jones and the Dap Kings will have a new album, I Learned it the Hard Way, ready for May. [BeatCrave]

• You can watch an entire Thao and the Get Down Stay Down concert at Baeblemusic.com [KRS].

• M.I.A., who's always been outspoken about political unrest in her birthplace of Sri Lanka, has bashed the New York Times on Twitter (screenshot) for listing the country as the #1 "place to go" in 2010. (Pitchfork].

• Solange Knowles, the Dirty-Projectors-covering, safe-sex promoting, little sister of Beyonce is going to be on the upcoming Of Montreal album. [Pitchfork]

• And lastly, here are some women artists who you should check out!
-Kgomotso "KG" Tsatsi: Neo-sould with a hint of rock, this young woman sings in nightclubs in between classes at the University of Toronto. An amazing vocalist who taught herself guitar and writes and arranges her own music, and is clearly going places.
-Warpaint: Minimalist post-punk trio from LA. Refreshingly not lo-fi!
-Dengue Fever: Cambodian-American sextet whose retro-styled sound you might have heard on Weeds and True Blood.

I am enjoying <i>The Fool</i> at the moment! 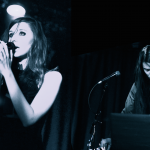 by Katie Presley
Even if their latest single weren't called "Murderer," Lolahiko's lush indie pop would stay dark and mysterious.