B-Sides: Waxahatchee for the Changing Seasons Temperatures are still in the mid 90s and the sun’s still setting after eight o’clock, but we need to brace ourselves for the eventual changing of the seasons. Luckily, we’ve got the perfect cure for, or accompaniment to, the end-of-summer blues: Brooklyn’s Katie Crutchfield, better known as Waxahatchee. Her quiet tape echo ballads seem borne of the universe found sandwiched between two sheets and covered by a well-worn duvet.

Crutchfield’s pop-punk pedigree shines through the murky recordings of her Waxahatchee project. She used to criss-cross the country with her sister, Allison, in their group P.S. Eliot (featured on our Blood, Sweat, and Queers edition of BitchTapes). Between records Crutchfield holed up in a basement and returned with a set of songs that would form the basis of her record, American Weekend. The songs speak of universal experiences of loss and vulnerability set in very specific times and places like Waxahatchee Creek and Portland, Oregon.

In addition to her music, Crutchfield is a thoughtful writer. She has written at length about tackling sexism within the DIY punk touring circuit and maintains a semi-regularly updated Tumblr that covers the life of a touring musician, along with requisite GIFS and GPOYS. I wish more musicians would open up about both the positive and negative aspects of their respective scenes with the conversational attitude and the casual smarts Crutchfield has.

Watch the video for Waxahatchee’s “Grass Stain,” and cry.

Her record, American Weekend, came out earlier this year, and while it may not be the freshest release, the melancholic atmosphere suits itself perfectly to the last days of summer. You can buy the record here (another Don Giovanni Records sighting, for those keeping count!) and you can also hear some nice songs she recorded for a split with Chris Calvin on the Waxahatchee Bandcamp, or down below for convenience.

Previously: In Defense of New Jersey, Screaming Females, Laetitia Sadier’s New Album is as Political as it is Pretty

I came upon Waxahatchee when NPR chose 'Be Good' as their song of the day sometime back in June or July. I hadn't thought of this, but I agree: perfect summer-into-autumn sound. Thanks. 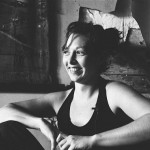