Zola Jesus can be hard to pin down. One minute, she smothers listeners with cold blankets of synthesizers, hitting them with some of the most uncomfortable atmospheres since Second Edition by PIL. Then her opera-trained voice (that voice!) bursts through the sludge and you realize “oh my god, it’s a pop song!” Live and on her latest record, Conatus, she drops a few more clues to the Zola Jesus mystery.

On the record, Zola Jesus slowly builds a mansion, walled with claustrophobic synths nailed together with brittle drum machines. Live, however, she breaks out of the mansion, storming the stage clad in a white robe, surrounded by four synth/drum players, shrouded head-to-toe in black. At Mississippi Studios in Portland last week, she led her band, who look like a cross between a street gang and a Noh theater troupe, through a set that drew from all three of her full-lengths. The addition of a live drummer drew out the anthemic quality of her pop side and deepened the unnerving tendencies of her noise side.

Singer Nika Danilova commanded the audience’s attention from the stage. The nervous energy her records hint at comes out in full in live form. She stalked from one side of the stage to the other, facing the audience directly only to sing into the microphone. Danilova seemed genuinely uncomfortable, darting under a synth and crawling off stage as the last song played out, but the audience, in a refreshing turn, embraced it.

Maybe it was the crowd that Zola Jesus attracts, maybe it was her “don’t-fuck-with-me” demeanor, but the show lacked the dumb sexism of most rock performances. There were no catcalls, no whistles or oohs-and-aahs as the crowd focused on Danilova throughout the show. I go to a decent amount of shows every year and am saddened by how typical/often it is that a women sets foot on stage and the crowd feels the need to about comment about her appearance/sexuality/body. To see a big show without any of that was heartening to say the least.

Anyways, I’ve been enjoying Zola Jesus latest, Conatus, and I think you will, too. It comes out today! Here’s a sample for the road: 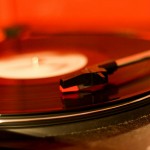