Beauty company and science scholarship provider L'Oreal surveyed 1,000 Americans this spring and asked them to name a single female scientist. The result was an EPIC FAIL! While 97 percent of respondents believed that women could make significant contributions to science (personal aside: terrible three percent, you're probably that uncle everyone hates. I hope you choke on your sandwich.) 65 percent could not name a sole woman in science.

This is troubling, because while the number of women earning science and engineering degrees has risen to 43 percent of total students (nerdy graphs here), apparently Americans still don't know female scientists are out there workin' hard. There's a lot of reasons for that discrepancy — for one, women are more likely to become social scientists, like sociologists, that some Americans might not equate with the test-tube, primate-poking image of "scientists." America also lacks high-quality science education in our schools, much less education about specific women and their contributions to our scientific knowledge. But there's also a huge discrepancy in the presence of women in nationally-visible science positions. The Association for Women in Science points out that female membership in the National Academy of Science is 15 percent lower than it should be based on the number of female science grads.

Bah! To school yourself on some awesome female scientists, check out a list compiled by Jen at Scientific Blogging. My personal favorites are 20th century stars Jane Goodall (who has an amazing life story, leaving home bound for Africa at age 26, returning to Africa years later with only her mother and a cook to set up her primate research center AND THEN 45 years later giving a lecture in Des Moines that made me cry) and DNA-researcher Rosalind Franklin, who was immortalized in the great graphic novel Dignifying Science: 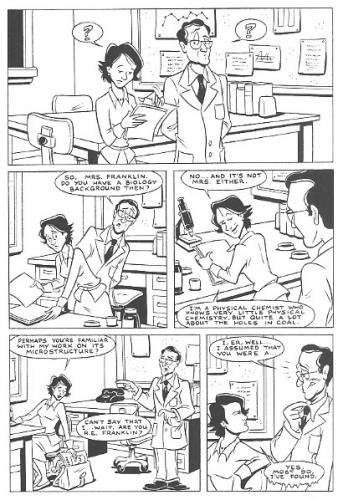 I'm afraid I probably can't. Not because I don't know of any specific ones (I can name several current women scientists by what they do, contributions they've made, where they work, papers they've written, etc.), I'm just TERRIBLE with names. :P

So, I probably couldn't name a current male scientist either.

I'd like to know the replies given of those who were able to name one, and how many of them didn't use "Marie Curie".

I couldn't quite remember her name until I looked--like the first commenter, I'm terrible with names--but Maydianne Andrade (biology) impressed the heck out of me on this past week's NOVA scienceNow, NOVA episodes that are in a popular science newsmagazine format (and hosted by the awesome Neal deGrasse Tyson). They profile a scientist in each episode, and give a lot of screentime to women and POC.

Between NsN and old eps of Scientific American Frontiers, I've heard about a lot of female scientists doing awesome things that I never would have known about, like Cynthia Breazeal (robotics) and Pardis Sabeti (genetics).

Nice post. Even if I have heard of most of the names like Grace and others, I'd guess that Jane Goodall and Curie would be the most popular ones. Why? Nobel Prizes, papers published, actual contribution may be relevant but I also think that familiarity in the media is yet another thing altogether. It is here there are other huge gaps that need to be filled and still exist.

My physics and chemistry texts had Mme Curie's name along with the Bohrs, and Rutherfords so I remember her. We heard of Watson and Crick and never heard of Rosalind Franklin and so on for reasons obvious. Similarly in the Television media and popular science publishing, if people know and instantly recognize Carl Sagan, Feynman, Richard Dawkins and others it is because they see their names in media, books and repeated and reinforced again and again. These help create an image of scientific authority among the public and the names end up in public memory.

As much as I am proud of a distant Hypatia, I'd certainly love to see a few Top 10 popular science books authored by female scientists which I can relate to in my times. I know there are quite a few but may be someone ought to compile one such list!

Perhaps L'Oreal was surveying a lot of straight right-wing Republican males. How could someone with a clue about science not immediately think of Dr. Lisa Randall, Professor at the Harvard University Department of Physics, leading theoretical physicist and Author of the book 'Warped Passages'. She's been on Charlie Rose and C-Span. Her name comes up along with people like Professor Stephen Hawking and Dr. Michio Kaku in discussions about various unification theories (of quantum physics and relativity) like String Theory. I'm a dummy, and even I've heard of her.

i was gonna say marie curie, but someone beat me to it.

i would be interested by what the 10 or so most common answers were. For me, a physics student, i had a few answers that jumped immediately to mind: Marie Curie, Irene Joliot-Curie, Lise Meitner, Emmy Noether..
For those who don't know Irene Joliot-Curie is one of Marie Curie's daughters, who also won a noble prize with her husband. Lise Meitner was a Jewish Austrian nuclear scientist who has an element, Meitnerium, named after her. Also barely escaped when the Nazi's got control of Austria. Emmy Noether (my hero) was a very important mathematician in group theory, and also has an important result in theoretical physics, Noether's theorem. As a female and a jew she was not particularly popular with her university but David Hilbert (another famous mathematician) was a great champion of hers and worked hard on trying to beat some stupidity out of them.
Another interesting mathematicain is Mary Ellen Rudin. She does set theoretic group theory, and i stumbled across her once.
Isn't famous for her science so much, but radio astromoner Rachel Padman is another cool person. She has an interesting account of undergoing a sex change whilst doing her PhD.

If they had asked people to name one female celebrity that had a sex tape leaked in the last year, nobody would have had a problem remembering names.

We are forgetting ladies, that in these times women are only mentioned if they are naked.

I know several female scientists personally, but here are two famous ones:

Barbara McClintock was a 20th century geneticist and won a Nobel prize for her discovery of transposition. I had a genetics professor who highly recommended her biography, "A Feeling for the Organism," though I haven't read it yet.

Joan Roughgarden is a Stanford ecologist. She's also a transsexual woman and has written a terribly interesting book called "Evolution's Rainbow" about sex behavior diversity in the animal kingdom.

The name of Marie Curie is the first that comes to mind.
As for me, my first thought was about first programmer of the world - Ada Lovelace! She was writing programs - that is, encoding an algorithm in a form to be processed by a Charles Babbage's computer. I think she's worth to be mentioned above all women scientists.
<img src="http://upload.wikimedia.org/wikipedia/commons/thumb/0/0f/Ada_lovelace.jp...

Appreciating the persistence you put into your blog and detailed information you present.

It's great to come across a blog every once in a while that isn't the same old rehashed material.
Great read! I've saved your site and I'm including your RSS feeds to my Google account.