Y’all, I had fun thinking through Hanna. I understand why Joe Wright’s action thriller about a teenage girl (Saoirse Ronan) trained as an assassin by her father Erik (Eric Bana) who wants to play tag with CIA operative Marissa Wiegler (Cate Blanchett) wasn’t more warmly received—yet I still think it’s underrated. Some people may have found the Chemical Brothers’ block-rocking score to be too obvious. It was, but it also was lock-in-step with the sound department and film editor Paul Tothill’s frenetic design. This is particularly evident during the gorgeously excessive action sequences, which ramp up the tension and catharsis in a calculated yet totally rewarding fashion. I bring up the Chemical Brothers’ score to address a larger concern, which is how effectively the film handles the global scale of its characters’ professional and lived experiences and what this may suggest about a variety of racial and ethnic tensions bubbling under the surface. The protagonist’s and antagonist’s missions begin in Finland and Washington D.C. and continue through parts of Morocco, Spain, and Germany. Hanna has a British director, an Irish lead, two Australian principles, and British supporting players. England also has a rich, difficult history as a colonizer and as a site of immigration, particularly for Caribbean, Jamaican, South Asian, South African, and Middle Eastern populations. This is reflected in a number of places, including much of its contemporary literature, particularly the work of Zadie Smith, Patrick Neate, and Hanif Kureishi.

These exchanges also inform English citizens’ innovations in dance music, which is where Tom Rowlands and Ed Simons’ contribution to Hanna becomes relevant. Disco’s militant four-on-the-floor rhythmic patterns were a foundation on which to layer reggae’s rhythmic pulse, soul divas’ arias, dub’s echo, funk and hip hop’s fat bass lines, sampled Bollywood scores, repurposed psychedelia, and techno’s compositional explorations with the Phrygian scale, a modal sequence distinguished by an augmented step between the second and third degrees that is often associated with Middle Eastern musical idioms. It may scan as utopian on paper or at a rave, but it certainly doesn’t sound that way when used to score an international game of cat and mouse.

I think this plays directly into Hanna’s racial and gender politics. A number of critics, like Manohla Dargis and A.O. Scott, contextualized the film as part of a wave of releases about young female lethal weapons with daddy issues. BUST contributor Mary S. noted a similar trend, and pointed out the problematic implications of inserting another white girl into a revisionist fairy tale, having to face off with an ice queen matriarch, and demonstrating a latent homophobia that might inform the ambiguous characterization of Weigler’s peroxide-domed, cabaret-patronizing accomplice Issacs (Tom Hollander).

The privileging of white girlhood is rampant in fables, as well as their revisions. Hanna is linked to Ellen Page’s turn as Little Red Riding Hoodie in Hard Candy and Catherine Hardwicke’s take on Red Riding Hood, as well as white female musicians’ involvement in these retellings, whether it be Fever Ray’s contribution to Red Riding Hood’s soundtrack or the influence of Disney musicals on St. Vincent’s fractured, feminist fairy tales. The paucity of representations of girls of color in this narrative tradition inspires texts like The Princess and the Frog to become sites of contention and Mulan to be so protectively cherished. We still filter representations of girlhood through fairy tale characters and dolls, and so privilege conventional white feminine beauty in their constructions.

Hanna makes a contribution to this canon we’re creating and critiquing in two ways. One is how the film gets at the inherent constructedness of white normative girlhood and the other is Hanna’s complicated encounters with homosociality. In both regards, I side most with This Recording contributor Elisabeth Donnelly’s assessment of the film. Hanna was built in a lab. This is evident in her quick reflexes, her mastery of multiple languages, her stoicism, her drive, and her complete disconnect from “typical” teen girl behavior. It may also toy with Anita Harris’ can-do girl, a high achiever who is shaped by and thus internalizes society’s patriarchal, binaristic expectations of how “good” girls are supposed to behave. This is played for comedy when Hanna meets Sophie (scene-stealer Jessica Barden), who is caravanning through the desert with her hippie parents. The precocious, whip-smart mallrat guilelessly insists upon establishing a friendship, in part out of fascination for Hanna’s alien ignorance toward pop culture, flirting, fashion, and gossip as well as out of a general concern for her well-being. Sophie doesn’t know the half of what Hanna’s going through and is only part of her life for a brief period. But she also gathers that whatever her friend is going through must be considerable but never asks questions or passes judgment. I agree with Donnelly—in the sequel, they share billing. We learn late in the film that Hanna’s father helped recruit pregnant women from abortion clinics so that the CIA could use their fetuses’ DNA to create emotionally impenetrable children with super-human strength. The project was killed, along with the women and children. Erik fled with baby Hanna and her birth mother, Johanna (Vicky Krieps), who was shot down by Weigler during their escape. Thus it could be argued that both women are Hanna’s mother. But given the final showdown between wicked stepmother and rebellious stepdaughter in Berlin’s Spreepark (an abandoned carnival that is also featured prominently in filmmaker Bruce LaBruce’s queer coming-of-age zombie film Otto), I think Hanna has more of a bond with Weigler. Both share a respect for marks(wo)manship. The resulting matricide that concludes Hanna reminds me of Coraline and the psychic processes by which the titular protagonist attempts to free herself from other mother’s clutches. Even though there are misogynistic undercurrents to the fatal gunshot wound Hanna delivers, Weigler’s death suggests irresolution. Weigler will never die because she lives on in Hanna, and her story will be retold and revised just like the fables women and girls pass on to one another.

Previously: The Watermelon Woman, Come Back to the Five and Dime, Jimmy Dean, Jimmy Dean

Great analysis. I really found this movie so interesting, and I love seeing others trying to figure it out. I was uncomfortable with the killing of Weigler, but at the same time I feel like, well if we're going to have a female-dominated action movie, some female characters are going to kill each other. I just loved the Sophie character and actress and her friendship with Hanna.

I loved Hanna. What did you think of Colombiana? I enjoyed it, though it wasn't as well-done as Hanna and stretched disbelief to the limit. Zoe Saldana really sold it, though. Maybe I just can't resist a female revenge flick.

I loved 'Hanna' and it's feminist themes. I particularly enjoyed the friendship between Hanna and scene-stealing Sophie (Barden was seriously fantastic in this!). But it did suffer some problems.

As you astutely point out, Hanna's yet another white character. 'Hanna' still pits women (or women and girls) against each other with Hanna battling Cate Blanchett's character, who happens to be playing fairy tales' childless evil stepmother role. Childless is too often code for unsympathetic at best or evil at worst in Hollywood. Also, in our youth-obsessed culture, strong, assertive female roles in films are often played by adolescent girls, not women (Winter’s Bone, True Grit).

Hanna was a thriller to watch. Tne actors were amazing and the story was hooking. Still, it was just another young pretty white girl playing the role of the stoic straight man. Nothing original.True Grit and Kick Ass are other recent examples.

The reason why she can't be a PoC? Replace the actoress with a middle eastern girl, she would have been called a radical terrorist. Black girl? What father?! Black girls don't have those in movies. Hollywood as a whole refuses to take risk and paint characters outside of their sterotyped molds and develop real new, interesting roles. They prefer to take the easier rode and go with the generic white girl.

Why is it that if a white girls or Asian girls kill or be expert assassins, they are cool and admirable while a black or middle eastern girls is seen as angry and/or murderous?

I wanted to like Hanna for all the reasons you mention, but in the end it was the overly artistic fight scenes and music that sounds like you're in a club that turned me off of the movie as a movie. As a political statement, though, it's definitely interesting. Thanks for the comments, I'll try watching it again to see if I like it any better the second time.

Say, wah? Regarding "while a black or middle eastern girls is seen as angry and/or murderous," can you name me a movie in which either plays the lead around which the story revolves?

I'll say one thing about this movie, were the lead role a young male and the ice queen an asexual male (or whatever is the corresponding stereotype), this move would have been ravaged by the critics. And the critics are not being generous with Hanna as it is, it's just that such a movie and its sexual politics will be judged differently. And I for one am more than happy to support these kinds of movies -- actioners with lead roles played by women -- even if they come with their own host of baggage. In time, say, like a 100 years, sadly, what will it matter how "we" got there so long as we can then look at entertainment without questioning the sexual choices and making trite comparisons whether deserved or not.

I loved the movie, it's graphically and musically good, with adventure and danger and everything =D
Yes it's all white, but i think it's not because of the girl, it's because of the movie makers. The men are white, too.

There's one scene that really irked me. It's when Hanna kisses her friends. In movie, a guy kissing a guy is a pure coming out of the dudes that become gay forever. When two girl kisses it's a) an expression of their feminism or b) hot to see for guys... She never had a friend, why the hell would she kiss the first one while fleeing the dude ? Maybe it's not the case for Hanna but in most movies, it's just a new trend of having girls doing porny things that guys will enjoy. -_-' 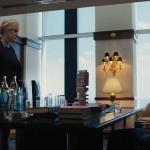 by Sarah Marshall
The hard-nosed finance pros know their careers are always jeopardized by the simple fact that they have to prove themselves over and over.