Making love with your muse is part of the creative process. Sometimes this happens purely as metaphor, as when Carrie Brownstein and Mary Timony get down with their guitars. As a culture, we don’t mind much when men do this with women. Directors and rock stars almost seem to do this for sport with actresses and models—Woody Allen with Diane Keaton, Jack White and Karen Elson. I don’t mean to suggest that these relationships should be taken as demonstrations of sexist, heteronormative power imbalances between the male subject and the female object—look, I don’t know their lives. Apparently Keaton wanted Allen’s body. Yet I still think we configure the artist-muse relationship as heterosexual and ascribe patriarchal power to it.

But partners always want something from their lovers, and partnerships between creative people always have multiple demands to negotiate. If they didn’t, Jill Scott and Erykah Badu would divine their art from other experiences and it would have worked out between Kim Gordon and Thurston Moore. Is the artist-muse relationship challenged when the artist is a feted photographer coming out of retirement because she’s sexually attracted to a woman hoping to make a name for herself as a magazine editor? How do power dynamics shift when the photographer is an older lesbian in a long-term relationship with a heroin addict and the would-be magazine photography editor is a recent college graduate with a longtime boyfriend? Who’s musing who?

I included writer-director Lisa Cholodenko’s 1998 feature debut High Art for a few reasons. I liked Polly Allen’s “In the Frame,” a feminist art blog series she wrote for Bitch late last year. Lucy Berliner (Ally Sheedy) is modeled after photographer Nan Goldin, particularly in terms of her medium, candid approach, and early ’80s heyday. Casting Sheedy was also interesting to me. I encounter straight actresses playing lesbian characters with fascination and suspicion. Also, Sheedy’s characters in The Breakfast Cluband St. Elmo’s Fire were as influential for me as any of Molly Ringwald’s Brat Pack titles (actually, I have more in common with pre-makeover Allison Reynolds than Claire Standish). Gesturing toward Anne Helen Petersen’s essay on Claire Danes’ second act, I’m invested in actresses’ longevity. As a girl, Alexandra Sheedy wrote the children’s book She Was Nice to Mice. As an adult, Sheedy had trouble breaking out of the Brat Pack mold. High Art was primed to be her comeback. It didn’t work out exactly, which is too bad. She’s excellent as Berliner, all bony limbs, delicate hands, and dark eyes. She’s a woman conflicted. She’s in a stagnant relationship with Greta (Patricia Clarkson, channeling Nico and German expressionism), someone who’ll never love her as much as she loves drugs and her own decadent past. She knows pursuing an affair with editorial assistant Syd (Radha Mitchell) may lead to a dead end—and poses a huge conflict of interest when she represents that affair in her comeback pictorial—but she guides her straight charge on the ways of lesbian fucking. She doesn’t know what to do with her art—or rather how to control what others do with it—but treats her camera like an appendage. I’m also a Cholodenko fan. (Based on her guest DJ playlist for KCRW, I’m convinced we should make each other mixes.) I found The Kids Are All Right to be at once a vexing film and an insightful character study. While I still don’t understand why Jules (Julianne Moore) cheats on long-time partner Nic (Annette Bening) with their sperm donor Paul (Mark Ruffalo), I like how the film chooses to focus much of its energy on working through the aftermath as well as render with subtle nuance the discreet charm of the So-Cal bourgeoisie.

I’m not sure how I feel about her films’ sexual politics—is heterosexuality a threat or an inevitability in lesbian coupling? But I do like that she acknowledges sexual fluidity between the poles. Both Kids and High Art involve infidelity. Jules briefly dabbles with (possibly returns to?) male-female sexual congress. Syd leaves her boyfriend James (Gabriel Mann) for not only Berliner, but the seductive world in which she holds court. High Art also addresses internalized homophobia and disappointment within families. It doesn’t matter if Berliner is a world-renowned photographer successful enough to slum into an early retirement with Greta. Her mother still calls her daughter’s girlfriend “the German” and doesn’t want her daughter to take her picture. The film is hamstrung by some implausible screenwriting and one poor casting decision. The pair meets cute as upstairs-downstairs neighbors. Berliner has a leak that’s dripping through Syd’s ceiling, which is rather obvious motivation. Berliner’s objectification of Syd’s body when she’s reclining behind her tub with a wrench does the job. Syd brings Berliner’s work in to her editors (David Thornton and Anh Duong), who are shocked and offended that they weren’t informed of the photographer’s return from a self-imposed European exile. They cannot believe that Syd doesn’t know Berliner’s work and I’m a little suspicious too. Come on. You have a humanities degree and want a career as an editor for an art magazine, yet you haven’t heard of Nan Goldin stand-in Lucy Berliner? Someone slept through the lecture on contemporary art history. Finally, based on Mitchell’s tepid performance, I’m unconvinced that Syd is a compelling lover or muse—if there’s actually a difference between the two roles. But some things you have to entrust to the artist, whoever that is.

Previously: Illusions, An Angel at My Table

I fell in love with this movie this first time I saw it. I could never articulate what made it resonate with me, but Lisa Cholodenko's work continues to intrigue. You don't mention Laurel Canyon, which I actually think is my favorite of her films.

Thanks for highlighting this great movie: You've encouraged me to seek it out again. 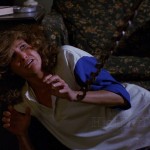