Bechdel Test Canon: Set It Off

About a month ago, a friend of mine was putting together her syllabus for a college course on black cult cinema and noted on Facebook that there is no scholarship on the subject. Sure, folks have written at length about movies like The Rocky Horror Picture Show and basically everything David Lynch has ever made. But you have to really dig to find stuff that specifically addresses black film texts and audiences as cult phenomena. As a feminist media scholar, I’m appalled by this lack of available resources, which reinforces how much my field privileges a white purview. But before the conferences and publishing deals can come together, my friend needed to build a class that’s on the books. Some of us offered suggestions for literature and screening materials in the comments section and I can’t wait to hear how the course turns out. Don’t you want to take a class where you watch and discuss The Wiz and Hollywood Shuffle?

One question I had as people were volunteering titles is “what makes a film a black cult movie?” “Cult” is a tricky word in this instance. So few films by black media producers get made and released. Those that do are expected to be huge, immediate financial successes. Donnie Darko has the luxury of alienating a mass audience and tanking at the box office before finding fans through rentals, DVD sales, and word of mouth. But several of the films we suggested performed well in theaters. It seems ridiculous to call Spike Lee a cult filmmaker or position Waiting to Exhale as a cult film. Even if these titles are taken up as cult films within African American communities, they usually have to outperform many films claimed as cult gems by white audiences in order to acquire a cult following and ensure that more films with black personnel get made. The game is rigged.

Is F. Gary Gray’s 1996 feature Set It Off a cult film? Frankly, I’m not sure. I think his first film, Friday, could qualify. But in the mid-90s, you couldn’t turn on MTV, BET, or the Box without watching one of his big-event music videos. Remember where you were when you first saw Dr. Dre’s “Keep Their Heads Ringin” or TLC’s “Waterfalls”? Gray came into the production of Set It Off with that kind of name recognition and continues to build on it. However, New Line could only secure a $ 9-million budget, largely because the film was pitched as Thelma and Louise for black women.

Set It Off does fit the following criteria that are often found in cult films. They tend to have casts of young, promising actors who go on to top-billing success. This film helped make then-newcomers Jada Pinkett, Queen Latifah, and Vivica A. Fox household names and marked the screen debut of actress Kimberly Elise. In addition, writer Kate Lanier helped develop the story and has since worked on Beauty Shop, Glitter, and VH1’s forthcoming TLC biopic. Cult films tend to have substantial flaws but are championed in large part because of those imperfections. Set It Off has a number of tonal inconsistencies and narrative missteps that can be overlooked because of the remarkable performances from the lead ensemble.

What is more, cult films usually acquire such status because of their cultural resonance. Set It Off is very much a product of its time, speaking to the rage and hopelessness of a ghettocentric inner city-Los Angeles besieged by institutional corruption, inescapable poverty, and a racist police force. Yet much of its anger is still relevant, as racial profiling and police brutality remain systemic problems. Set It Off’s quartet robs banks out of necessity. Frankie (Fox) loses her teller job after an acquaintance holds a stickup and begins working as a janitor with friends Stoney (Pinkett), Cleo (Latifah), and T.T. (Elise).

Much has already been said about the film’s performances, and deservedly so. Queen Latifah in particular delivers a star-making performance as Cleo, a ride-or-die sister with butch magnetism. Elise is also hauntingly effective as T.T., a kind-hearted woman forced to fight back when pushed into a corner. While the film’s love story between Stoney and banker Keith Weston (Blair Underwood) never quite comes together for me, I do appreciate that the film attempts to show a nurturing heterosexual relationship. But I was also drawn in by veteran actresses’ Ella Joyce and Anna Maria Horsford’s supporting roles as Detective Waller and social worker Ms. Wells. In my mind, both women are underused, but their stoic yet subtly empathetic performances suggest a deep ambivalence toward their professional involvement in a system that continues to target and disenfranchise black women. Stoney and T.T. in particular are faced with the challenge of providing for family members on a single income. Stoney turns to crime after her kid brother Stevie (Chaz Lamar Shepherd) is accidentally killed by the same police officers who were responsible for Frankie’s dismissal. At one point, T.T. loses custody of her young son after he ingests disinfectant while his mother is at work. All the women are put in a compromising position when their boss Luther (Thomas Jefferson Byrd) shutters the janitorial business they continued to work at as a cover and absconds with their money. The film ends with three of the four women dead by police gun fire. Only Stoney escapes, ending up as an exile in Mexico. It’s an ending that makes me angry, quick to dismiss their deaths as lazy plot contrivances. But then I remember how often these stories play out off-screen in a similarly tragic fashion and how little opportunity is given to tell these sorts of stories at the multiplex.

I’m not sure of Set It Off’s status as a black cult film, and know I am in no place to make such a clear assessment, but I know we can call it an important film that continues to challenge old and new audiences.

I agree that the ending is infuriating.
Thanks for this thoughtful post.
I'm not sure that I believe there is such thing as a black cult film. Because black people's taste in movies, clothes and music is typically followed and eventually appropriated, I think that necessitates that the idea of a "cult" following takes on a different form in the black community. I think it a black cult film becomes a film that only black people (or only a segment of black people) consider important and seminal while white and non-black audiences largely dismiss it. I think Pariah will be a film like this. I think Waiting to Exhale counts, too, if only because it was one of the first on-screen/book adaptations to address the educated black man shortage that's still over covered in mainstream media. 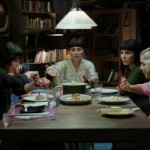