If you'd told me ten years ago, “I have a really great mp3 for you—it's a recording of two people you don't know discussing their lives,” I would have been very confused, and then probably would have told you to go to hell. But that was then, and this now.

Today, podcasts are an important and powerful form of media; there more than 90,000 English language podcasts and the most popular show (like NPR's This American Life) have over half-a-million listeners.

And yet, in many ways, women seem to have been left out of the podcasting revolution. As Third Coast Radio Festival Artistic Director Julie Shapiro reported for Bitch earlier this year, men host 71 percent of the most popular podcasts.

The stats in the world of comedy podcasts specifically are not much more encouraging. Of the top 8 US comedy podcasts on iTunes, only one show includes a female co-host: the phenomenal June Diane Raphael, on How Did This Get Made?

Podcasts, in a very brief period of time, have changed how we define and consume entertainment. And nowhere has that impact been as deeply felt as in the comedy scene. Comedy podcasts are more than just a tool for comedians to refine their craft and reach new fans—comedy podcasts have become big business, with “Maron,” “Nikki and Sara Live,” and “Comedy Bang Bang” becoming the most recent examples of comedy podcasts growing into TV shows.

But aside from superstar podcasts “You Had to Be There” (the show that inspired “Nikki and Sara Live”) and “How Was Your Week?”, podcasts produced by women are often ignored by entertainment reporters and cultural coverage. Recent pieces, like this 2012  New York Times article about comedian-created podcasts, or the About.com guide to comedy podcasts, would have you believe that female-hosted comedy podcasts don't even exist.

That, of course, is downright laughable. Female comedians are turning out excellent and noteworthy podcasts every single day. In fact, I spoke with one of them—comedian Cameron Esposito—to learn more about the importance of podcasting within the comedy world, and how we can better support the female comedian podcasters out there.

Esposito hosts two weekly podcasts: the live comedy show podcast Put Your Hands Together and the action/ sci-fi movie podcast Wham Bam Pow, which she hosts alongside comedians-panelists Rhea Butcher and Ricky Carmona. Like most podcast hosts, she came up through the ranks by appearing as a guest on other podcasts, before being approached to create Wham Bam Pow by the Maximum Fun podcast network, and pitching Put Your Hands Together to the Upright Citizens Brigade Theater in Los Angeles with producing partner Ryan McManemin.

Podcasts certainly increase your visibility (I count Esposito as one of my favorite up-and-coming comedians, but have only heard her album and podcast work). But podcasting also helps comedians build the skills they need to take their game to the next level. Of hosting Put Your Hands Together, Esposito says “I try to open the show with new material every week, which is basically the opposite of most standup experiences… The constant turnover is making me a better comic.”

“In my opinion, podcasts have really democratized comedy,” continues Esposito. “They've also given audiences the chance to decide what fits their personal comedy taste and go after that content. Instead of one comedy cable network, listeners can choose from a huge variety of different comedy genre and follow the careers of their favorite comics much more closely.”

However, the more revolutionary aspects of comedy podcasting don't mean that it is free of all of the baggage of the traditional comedy scene. “Podcasts, comedy clubs, TV—comedy is still man's world,” says Esposito. “It's just a numbers game, really. BUT there are more women having success in comedy than ever before, and if more gals keep at it, the numbers will keep changing.”

Comedy fans can take some simple steps to support female-hosted podcasts. Esposito has some tips:

• Rate and review podcasts you like on iTunes. “This helps any show's visibility, it'll make the show more prominent in the listings and then more folks will see it.”

• A lot of comedy festivals are now including podcasts. Tweet at or email the festival organizers and request your favorite shows.

• Contact podcast networks and let them know how much you dig their female hosts—get specific. This lets content producers know that their backing of female talent is important to you.”

• one of the biggest things we can do to get more women-hosted podcasts is to encourage women to make their own shows. Anyone with GarageBand on their computer and a microphone can make a podcast, so if you're a comedian starting out, Esposito urges you to just go for it: “My point is: gals, make your own podcasts. And listen to what's out there so you know where the gaps are. We could absolutely use more funny gals making shows.”

Here's a short list of fantastic female-hosted comedy podcasts. From traumatic high school memories to old-timey radio show parodies, there is something female-produced for every comedy palate. Give them a listen!

What's that, you say? You're looking for a show that combines parody of 1940s radio variety shows with a modern-day improv sensibility (and frequent sex jokes)? Then the Apple Sisters, a comedy troupe who are both sweetly charming and dirty as hell, are for you.

Comedian Emily Heller (who was also featured in our post on funny feminist jokes) and artist Lisa Hanawalt host this weekly podcast, where they invite other writers, comedians, and artists to teach them a little something from their own unique area of expertise.

Jackie Kashian brings fellow comedians, musicians, writers, and assorted other folks on board for this celebration of all the different things there are in life to dork out about.

Comedian and “Chelsea Lately” writer April Richardson is watching every single episode of “Saved By the Bell,” in order, with special guest hosts, and then making jokes about them, so that you don't have to.

Tig Notaro, Kyle Dunnigan, and David Huntsberger oversee this weekly round table discussion, where guests from the comedy world and beyond discuss everything from polyamory to statistics.

Kulap Vilaysack and Howard Kremer host this off-the-wall music and movie chart countdown show that's much closer to “Mr. Show” than it is to “TRL.”.

Also check out lists of women-hosted podcasts here at Bitch and at Transom.org.

And you know Bitch has a great podcast, right?

Read this whole guest blog series on feminism and comedy.

Photo via The Comedy Hipster.

I recommend <a href="https://itunes.apple.com/us/podcast/the-read/id619369512">The Read, it's hosted by Kid Fury and Crissle</a>, two HILARIOUS and smart friends who trash on celebrities but also have real conversations about identity, sexuality, race, and gender. Every week it gives me life!

I know you guys probably aren't fans of Adam Carolla (but I think the hatred of him is misguided) but Alison Rosen Is Your New Best Friend is AWESOME and should not be overlooked. 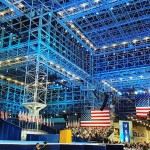 by Bitch HQ
In this election anniversary special, our staff shares what the election of Donald Trump sparked in us, how it changed us, and how it moved us to action.