The VMAs Cemented Feminism as Beyoncé's Brand. What Comes Next? | Bitch Media

The VMAs Cemented Feminism as Beyoncé's Brand. What Comes Next? 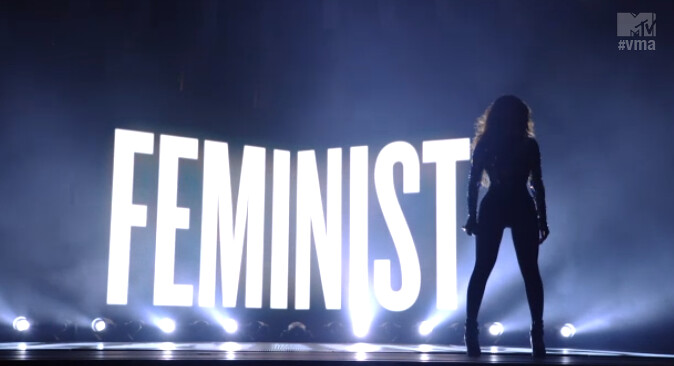 A confession: I wasn't going to write about The Thing. Everyone else, it seemed, had their think pieces written this past Sunday night, and I couldn't imagine what else there was to say about The Thing that everybody else hadn't already said.

But, as I watched the video of The Thing—and I assume you've figured out that I'm talking about Beyoncé's closing act of MTV's Video Music Awards, her performance of “Flawless” in front of a screen on which the word “FEMINIST” glowed in neon white—I realized that this was, in many ways, one of the reasons that Bitch was founded back in 1996: this was a moment that proved that popular culture is a crucial locus of feminism. It was a confirmation of the symbiosis of the two: the deep inroads feminist thinking has made into popular culture and, on the flip side, that culture's success in remaking feminism in its own splashy, indelible image.

When Bitch began, a celebrity who openly identified as feminist was pretty much unheard of. Now the woman who is arguably the world's brightest superstar was closing out the VMAs by proclaiming her allegiance to feminism in front of 8.3 million viewers. She did not merely flash the word on a screen but defined it with the words of Nigerian author Chimimanda Ngozi Adichie, whose TED talk, “We Should All Be Feminists,” is sampled on “Flawless.” For once, that hackneyed phrase about having come a long way actually seemed to fit.

Despite the litany of quibbles about her public persona, the name of her 2013 world tour, her honeyed weaves, and more, those who've been paying attention know that Bey has been remarkably consistent in her feminism, even before she publicly claimed the label. Her lyrics in Destiny's Child's biggest hits, from “Bills, Bills, Bills,” to “Independent Women Part 1” to “Bootylicious” have been about economic autonomy and bodily pride as key points of empowerment. Her race and its impact on her lived feminism has singlehandedly changed conversations about black women, respectability, family and power. Her influence on mainstream fashion and beauty ideals has been profound. To paraphrase something that her own husband once rapped: She's a business, man. And business is booming. 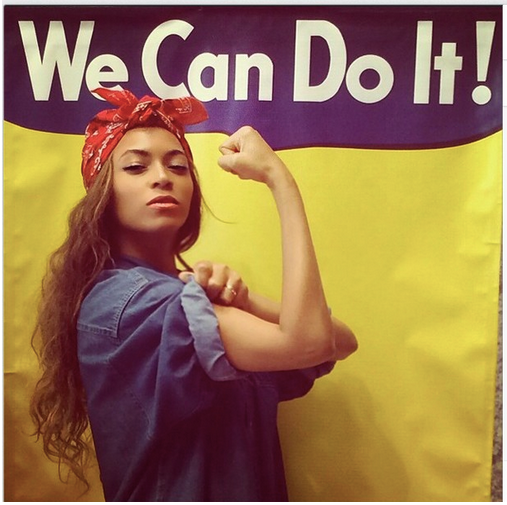 And that's what makes the VMA performance worth talking about just a little bit more. Over the years, Bey has spoken almost as much as she's sung about the importance of power and autonomy for women and girls, and recently contributed an essay titled “Gender Equality is a Myth!” to The Shriver Report; she's described herself as a “modern-day feminist” in interviews. But the VMAs appearance was different. Showier, more definitive. It  functioned as a specific kind of statement: Put simply, it positioned feminism as Beyoncé's official brand.

Nothing about Beyoncé is an accident, after all: This is an artist who turned the release of her fifth record into a multimedia event, dropping a “visual album” without warning last December, defying both industry PR and online leaks to become number one on Billboard charts within two days. In a pop-culture landscape of carefully crafted personae, Beyoncé's is perhaps the most airtight of all. Her VMAs performance seemed to say: “You associate me with black leotards, with killer dancing, with Jay-Z and Blue Ivy. Now you're going to associate me with feminism as well, so get there.”

That's a major move considering that until very recently, most women in the realms of film and TV and music have been loath to make a “statement” by identifying as feminist. Madonna, who preceded Beyoncé as the world's most captivating performer, has long had feminism ascribed to her in combative op-eds by Camille Paglia and in college courses with names like “Madonna Studies.” But Madge herself has never self-applied the descriptor, preferring to call herself a “humanist.” (See also: Drew Barrymore, Demi Moore.)

More often, though, there's been antagonism in the feminist rejections of famous ladies. Bjork, answering a question that Bust magazine, since its inception, has made a point of asking its interviewees (“Do you consider yourself a feminist?”) gave a hearty thumbs-down to the descriptor in 2005. “I think it would isolate me,” she said. “I think it’s important to do positive stuff. It’s more important to be asking than complaining.” Then there's celebrated actor Melissa Leo, who in 2012 told Salon that “I don't think of myself as a feminist at all. As soon as we start labeling and categorizing ourselves and others, that's going to shut down the world. I would never say that.”  And many of us can recall the celebrities who have rejected feminism on the grounds that it equates with hating men. Taylor Swift, when asked by the Daily Beast's Ramin Setoodeh in 2012 if she considered herself a feminist, answered “I don't really think about things as guys versus girls. I never have. I was raised by parents who brought me up to think if you work as hard as guys, you can go far in life.” (Swift recently announced that her thinking on the subject has transformed, in large part thanks to the feminist schooling of Lena Dunham.) And who can forget Shailene Woodley's all-too-recent, epically cringeworthy misunderstanding of the term? (“I think the idea of 'raise women to power, take the men away from the power' is never going to work out because you need balance.”)

There's much that is contained in Beyoncé's feminist coming-out, but arguably the most powerful aspect is that she provided a simple corrective to widespread misunderstanding of the very meaning of the word. By sharing Adichie's words—which themselves paraphrase the dictionary definition of “feminism”—Beyoncé was framing feminism as a concept so basic and commonsense that viewers might rightly feel a wee bit foolish for denouncing it. It's easy to read her presentation—the defiant stance next to that glowing text, cloaked in shadow but unmistakably bold—as a rebuke to the many famous woman who have let historical stereotype and media pejorative do their thinking for them. Will Beyoncé's now-indelible association with capital-F Feminism sufficiently shame those other famous women for their unthinking pronouncements and willful ignorance on the subject? Probably. Has she made the world safe for such women to do some hurried backpedaling and proclaim, like Swift, that they were feminists all along? It would hardly be surprising.

But is one VMA performance, historic as it was, going to actually change people's minds about what feminism is and why it matters? That's the key question, and so far, the answer appears to be: Maybe? Following the VMAs, Time's Jessica Bennett searched Twitter's vast well of data and found that typing the word “feminism” brought up countless references to Beyoncé. “Beyoncé would become the subject of two-thirds of all tweets about feminism in the 24 hours after her appearance, according to a data analysis by Twitter, making Sunday the sixth-highest day for volume of conversation about feminism since Twitter began tracking this year,” Bennett reported. Assuming that the tweets associated with this patterns weren't all from feminists kvelling over the performance itself, this suggests that feminism's legendarily bad PR has the potential to undergo a Beyonceified sea change. What if, instead of young women like Swift and Woodley learning about feminism through negative media and social stereotypes, the young women of new generations learn about feminism from a—dare to dream—positive perspective?

At the same time, a main takeaway from Beyoncé’s VMA performance, judging from excited media responses, is that she’s now proven definitively that feminists don’t have to be ugly man-haters. Which, when you consider that Gloria Steinem was supposed to embody that principle back in the early days of second-wave activism, doesn’t seem like a groundbreaking revelation, exactly.

And indeed, as Beyoncé was preparing to blow the world's collective mind on Sunday evening, the deeply entrenched sexism that necessitates feminist thinking and work was playing out on the VMAs stage. Lorde's inclusion as a nominee for Best Rock Video, for instance, was announced as an exception (“There's even a woman in the mix!”); on the red carpet, the casual ranking and assessment of women's bodies was business as usual for E! and other networks. And on the following night's Emmy broadcast, there was no better illustration of how far we haven't come than Sofia Vergara being literally put on a rotating car-show pedestal by the CEO of the Television Academy as he boasted about the medium's growing diversity and success. (Vergara didn't help matters, dismissing women who had a problem with the stunt as having “no sense of humor.”)

“Feminism is no longer the f-word, it’s the realm of cool kids,” wrote Jessica Valenti the day after Beyoncé’s performance, going on to list the celebrities who have recently self-labeled. But the branding of feminism as an attractive product for consumption is very different than the work of feminism as a progressive movement—one that, in large part, pushes back against commodification to begin with. Beyoncé's flawless fusion of the two has been, no question, a revolution within a longstanding movement. The question is what those that she and other celebrities have newly inspired will do in its service once the bright lights fade.

Related Reading: All Hail the Queen: What Do Our Perceptions of Beyonce's Feminism Say About Us?

Very good analysis of Beyonce's performance on feminism. I agree that she's been a feminist before this declaration which many people forget and looked over after the performance.