Beyond the Panel: An interview with Dorothy Gambrell of Cat and Girl | Bitch Media

Beyond the Panel: An interview with Dorothy Gambrell of Cat and Girl

Hello, and welcome to Bitch’s new weekly series on webcomics, Beyond the Panel! I’m Rachel McCarthy James, sometimes known as RMJ. You may remember me from my previous guest-blogging stint here last summer, TelevIsm, or my blog, Deeply Problematic. This time, I’m here to write about webcomics and the people who create them by interviewing cartoonists and comic creators who occupy a marginalized position in society, and reviewing comics through a feminist lens.

I’m kicking it off with an interview with Dorothy Gambrell, the writer and artist behind Cat and Girl.

Cat and Girl is a webcomic that began in 1999 about a cat, a girl, their friends, and their conflicted consumption of culture. Dorothy also writes Donation Derby, her documentation of how she spends the donations people give her—on beer, concerts, groceries, Internet, or other necessities; and the graphic blog very small array, which presents graphs, maps, and designs that reveal the peculiarities of our tastes, culture, and Internet presences.

But Dorothy is best known for Cat and Girl, which after 11 years is well-established enough to support her. Cat and Girl is difficult to describe. It’s one of those works you have to read yourself to get the hang of—I recommend browsing around by using the “random comic” button on her site—but it’s definitely worth it to put the time and effort put into reading it. The art is starkly black and white, and as playful, expressive, and as weird as the equally surreal (but much less outwardly critical) Achewood. Cat and Girl strips address concepts as huge as time and identity in the context of nostalgia and iPhones. Cat and Girl challenges the kyriarchy with strips about the folly of fairy tales and the dance of class mobility. It’s a comic for readers who are up for a challenge and feminists who are looking for questions as much as answers.

Dorothy was kind enough to answer a few of my questions about social critique, gender, and the Internet:

RMJ: Cat and Girl is a strip that requires a lot of consideration and intellectual participation on the part of the reader. Why is your focus so cerebral? Have you ever considered more traditional story arcs?

DG: I’m not a very strong narrative story teller. Or, with the deadlines I have, I’ve never had the free time to sit down and compose a long narrative arc. You can pick either one. I’ll take the first.

I don’t consider Cat and Girl particularly cerebral, though I do count myself lucky to have a readership who doesn’t mind looking things up. I was much more conservative in my references before Wikipedia became available.

RMJ: Do you think that your gender impacts reactions to you and your work?

RMJ: In your comics and blogs, you respond both to dominant cultural forces and hipster scenes. Hipster Grrl champions obscurity and shames any affection for mainstream culture. Protagonist Girl reacts to dominant forces like capitalism and nostalgia. Would you describe your work as more critical of mainstream or underground culture?

DG: I don’t think we can seriously say that current “hipster” culture (and, oh god, let’s not even use that word—it’s managed to become even more meaningless over time) and current mainstream culture are very different, unless anyone sees an unbridgeable gap between Target and Walmart. If you could point me to an underground culture I’d be happy to go there. But underground culture, post-Internet access, seems to be a race to “this is so unbearable you can’t co-opt it” and back again. That is not a race with winners.

RMJ: What is the role of feminism or social justice in your work? How do you balance social critique and artistic and narrative needs?

RMJ: Is there any kind of critical intent behind Donation Derby? Or is it more of a creative exercise—a way to respond to donors and share your life with your audience?

Donation Derby is an autobiography that only finds financial transactions worthy of preserving. And that is what it has done.

DG: I know that this is at the very best a stodgy stand—and maybe a thoroughly out of date and discredited one—but I believe in the finished product. Not as an audience member. As an audience member I admire the tossed-off comment—the demo tape, the unintended patina of age and the half-completed mess that gets up and decides to call itself done. But I can’t apply that to my own work. I fix typos, I rewrite endings. I think the process should be silent and the artist should be silent and the final product should be delivered and that is it.

RMJ: In addition to being an awesome and very prolific cartoonist, you’re also he guitarist for Jenny and the Holzers. Why do you make music? What portion of your time do you spend on music?

DG:I can’t necessarily draw something in the manner I’d like to draw it, but I can look at an image and understand the image. I do not understand music. At all. I am a fan of music. And that’s why it’s a fun and rewarding wall to throw myself against.

Jenny and the Holzers are going on a short tour through the Southeast this month.

RMJ: Eleven years is a long time to work on a particular project. How have you sustained your work for so long? Have you ever considered retiring the strip?

Thanks so much to Dorothy Gambrell! Come back next week for an interview with Danielle Corsetto of Girls With Slingshots!

Cat and Girl is one of my favorite webcomics! Thanks for the post and I'm looking forward to the interview with Danielle Corsetto!

Thank <i>you</i> Erica! Danielle is great and I had a lot of fun doing the interview.

I also love Cat and Girl (and Very Small Array) and am so happy you are starting this series. I hope Kate Beaton will also be included!

this is so great, i just started reading Cat and Girl for the first time roughly 6 days ago (I've worked my way up to 2004 in the archives), and It's interesting to hear what the creator has to say. Thank you very much for this, and Dorothy, please keep up the good work :) 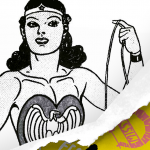 by K. L. Pereira
In a world that rarely embraces even real-life feminist heroes, is there any room for Wonder Woman?