If you read Bitch, you are likely at least somewhat familiar with Gloria Anzaldúa and her work with feminism, her beautiful writings, and her advocacy for women of color. She was a Chicana-Tejana-lesbian-feminist poet, theorist, and fiction writer, born September 26, 1942, in Raymondville, Texas. She passed away on May 15th, 2004, but still remains one of the most widely read, respected, and loved queer woman writers of color in history. As someone who identifies as queer and mixed race, her work was bound to play a pivotal role in the way I construct and understand my identity, the way I live my life, and how I interact with others. I picked up a used copy of Borderlands/La Frontera (the first edition) when I was 18 years old. Her semi-autobiographical collection of memoir and poetry was older than me, and I had no idea of the gravity of the impact it would have, but I began reading it, slowly–swallowing her words, and digesting them into my being. It was a lot to take in. Quickly, she helped me realize that the comfort I thought I found in labels was simply an assimilationist value I had adopted, not for myself, but for the comfort of others. I never knew how to answer the question, “so, what are you?” It was what I had been grappling with for my entire life; I was living between worlds–the borderlands. I am not either or, but rather, on the edges of all, in an unstable, and ever-changing terrain, “nepantla”–a Nahuatl word for the in-between spaces, where the boundaries are unclear, and we are constantly in transition. I can use ambiguity as resistance, and realize that I do not, and never will, fit so neatly into the boxes left out for me, for that would be the death of the borderlands, and the death of the identities I hold.

It is the chapter “Movimientos de rebeldia y las culturas que traicionan,” which roughly translates to “movements of rebellion and the cultures they betray,” that I carry closest to my heart. I have read those 10 pages more times than I can count. In this chapter, Anzaldúa notes “homophobia,” and not in the way you might think. She means the fear of going home, the fear of abandonment, by the mother, the culture, for being “unacceptable, faulty, damaged.” And to avoid rejection, we conform to values of “the culture,” while pushing what we are taught to understand as unacceptable into the periphery of our vision–the shadows. We’ve internalized our oppressions, thus, creating what Anzaldúa aptly named the Shadow-Beast. We fear that the beast will break free, and that our truths will show. Though, it is possible to come to terms with the Shadow-Beast, to see her as kind, and tender, as a being that wants to be released not in the name of destruction but to uncover the lies we’ve let inhabit our bodies, in order to come into our true selves, to resist imposed ideals, and to not be simply tolerated, but loved, and understood. It is a process, and most often, a struggle of pain, and melancholia. I am on a constant search for home, language, and kinship, and I was able to find a basis for all of this in Anzaldúa’s words. Needless to say, this book has impacted my life in a way that I can barely scrape with a short blog post. I will revisit this text for years to come, it will live with me, it will understand me, and I will continue to discover what it means to live in such a transient space.

Aunt Lute, a nonprofit press focused on bringing the voices of women—particularly queer women and women of color—to publication, is celebrating its 30th year, as well as the 25th anniversary of Anzaldúa’s Borderlands/La Frontera. For the 25th anniversary of the book, Aunt Lute is looking to publish a fourth edition, but they cannot do so without your help. So, please, keep Gloria Anzaldúa’s voice alive, and donate via Kickstarter by July 28th.

Previously: The Smart (and Spoiler-tastic) Analysis of Beyond the Wall 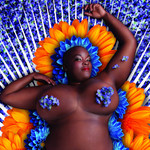 by Evette Dionne
The first six months of 2018 are full of great books.