As a big fan of the strange short work by writers like Gary Lutz and Lydia Davis, I was drawn to Lindsay Hunter's new book, Daddy's, nestled next to an anticipated Lutz rerelease in the small press section of Powell's Books. Many of the writers in this section are faithful upholders of the short story, a form that can be hard to market and is often thought of by more commercial writers and publishers as practice on the way to a novel. But the writers I love, the ones who choose the short story as their primary form, use carefully chosen words to place their characters in unexpected, sometimes disturbing situations. Then they leave you to make your own conclusions about what you've encountered. I hoped that this was the kind of thing I'd find in Hunter's Daddy's, and the jacket blurbs bolstered my hope. Kyle Minor wrote, "Lindsay Hunter won't be caught lie-telling in the name of nice. The miniature stories in Daddy's are fierce and unapologetic." I'm happy to report that Hunter's book did not disappoint.

What Hunter has written has been called a collection of "flash fiction," a term I really dislike because I think a piece of writing with such attention to detail deserves a subtler label. The stories in Daddy's don't flash. I think it's more accurate to say that they poke. These are wicked little works of fiction with sharp edges and unpleasantly squishy middles. One reviewer called them "diamond stories," but to me they seem more like sea urchins. 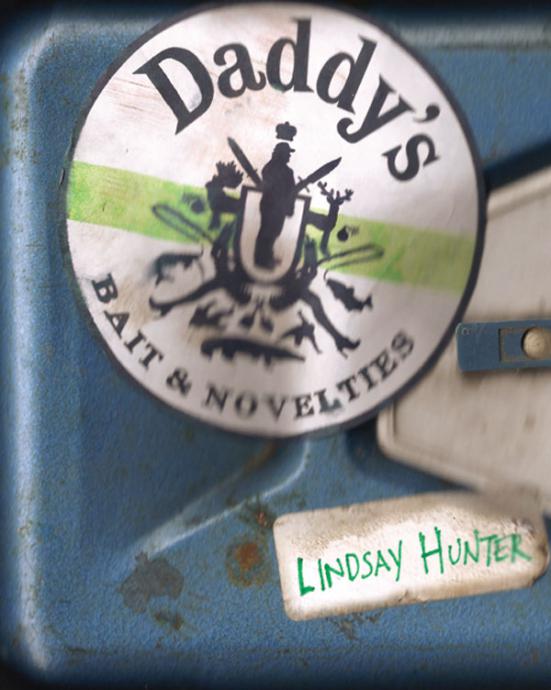 Let's take "The Fence," which is one of my favorites. This one centers on an unnamed woman's sexual relationship with her husband Tim, and with the invisible electric dog fence in her yard. The woman is having a lot of sex with Tim, and we get the feeling that it's intensely pleasurable for both of them. But the sex, like the relationship itself, has a rough edge. Though earthshaking orgasms are had by both, Tim is by turns brusque and sweetly clueless, failing to notice when his wife bumps her tooth against a tiled table during a particularly passionate session. As soon as Tim leaves, which he does often, the woman turns on Animal Planet to distract the dog, takes off his collar, puts it in her underwear, and stands at the fence. She shocks herself every day until the fence is taken out, and when it's gone, she weeps.

The mixture of pleasure and pain in "The Fence" runs throughout Hunter's stories, along with that squishy middle I mentioned earlier. There are so many fluids in Daddy's, so much blood and urine and shit and unappetizing food; "The Fence" has a short but disgusting description of Tim eating a pot pie. I've heard people complain of short stories that they aren't intimate enough, that the characters don't seem like humans, that the stories can seem like maps of situations without a way in. It's the squishiness in Daddy's that avoids coldness and creates a remarkable and unsettling sense of humanity. These stories, despite their brevity, have texture.

But is there room in flash fiction for commentary on gender and sexuality? Are these stories big enough to really tackle the issues that we spend pages and pages writing about in Bitch? To put it simply, yes. Because each word is imbued with layers of meaning, Hunter manages to bring up some really complicated questions, often about her female characters' relationships with men. For example, more than one character is named Daddy in this book, although sometimes the daddy is a father, sometimes he's more like a father figure, sometimes he's a husband, and sometimes he's all of these. This one word is made to do an incredible amount of work. An excerpt from the story "That Baby," about a child who develops disturbingly quickly, shows what I mean:

Levis wouldn't let Daddy sleep in bed with us, he was clever that way, soon as Daddy slid under the bedcovers Levis would start screaming, that nail torturing that rotted wood, that endless nail, then when Daddy would get up for a glass of something the baby would quiet down, and Daddy and I aren't stupid so soon we figured Daddy could get familiar with the couch for a while if it ensured Levis acted peaceful, and I gave Daddy permission to tend to himself in that way as much as he needed to since I was busy with Levis and couldn't do my wifelies.

Clearly Daddy is Levis' daddy and the narrator's husband, but the childish tone of the narrative complicates things. You get the feeling that Daddy is somehow both the baby's daddy and the wife's daddy, and as the quick-growing baby tries to usurp the role of husband he threatens to become both baby and daddy, and by the end of the story things are almost unbearably muddled, leaving the reader with a very disconcerting puzzle. This is the kind of fiction I can't get enough of.

My one criticism of Daddy's is its design: The book is made to look like a tackle box, with a beat-up blue exterior, a handle on the cover, and flaps that fold over the pages like a latch. The text is printed sideways on the page, so that the reader has to hold the book notepad style and flip the pages up and down. There are also pictures throughout and a confusing jumble of fonts on the title pages. Although the tackle box design is fun, it's my opinion that the words in this book are powerful enough to stand on their own without all the fancy design details. Nevertheless, Daddy's is a must-read.