BiblioBitch: Maxine Banks is Getting Married Lori Aurelia Williams has been one of my favorite authors since high school, when I was lucky enough to stumble across When Kambia Elaine Flew In From Neptune. Williams’ debut novel was a poetic, mesmerizing story of a working-class family in Houston. It also was the rare story to deal with sexual abuse in a believable yet unexploitative manner, as the narrator slowly discovered that her friend, the title character, was being prostituted by her guardian. Williams went on to write sequel Shayla’s Double Brown Baby Blues and additional novel Broken China, and while the latter drew controversy for its depiction of teenage motherhood and stripping, I admire both of those works as well.

So it was that I approached Maxine Banks is Getting Married with astronomical expectations. Williams’ first published book in five years, Maxine Banks features a seventeen-year-old protagonist, her oldest yet and arguably her strongest. Seeing her friend Tia’s (a character from Williams’ first two books) happiness at marrying her longtime boyfriend, Maxine suspects that marriage is the answer to her own life’s inadequacies. After all, she loves her sweetheart, Brian… and hates living with her hypercritical mother and her mother’s many abusive lovers. It quickly becomes apparent that what Maxine is actually after is escape, and she’s been forbidden to shack up while unwed. As they’re underage, the couple fakes a pregnancy in order to get their parents’ legal consent to marry. By the time their anticlimactic walk down the aisle rolls around, though, mild-mannered Brian has begun an affair with Shell, the classmate down the street, and he moves out of their new house. Brian’s father, firmly on Maxine’s side, offers to help pay the bills if she takes in Brian’s troubled cousin, Demonee. Though Maxine feels she has failed at being a wife, she must learn, in effect, to be a mother.

The marketing, cover and title of this book are misleading, as Maxine and Brian separate well before the halfway point. This might come as a disappointment for readers hoping for criticism of wedding culture (and I’m raising my hand here) but Demonee proves more compelling than Maxine’s marriage. Though she has repeatedly gotten into trouble at school, it quickly comes to light that Demonee was kicked out of her house for being gay and that much of her angst comes from believing herself to be unlovable because of her attractions. The development of Maxine’s and Demonee’s friendship is tender and honest, especially since Maxine is only starting to work through her own homophobia.

Demonee aside, I enjoyed the struggle against the ad hominem woman-blaming that often occurs around divorce. Prior to the wedding, Brian asks Maxine if she’s sure she wants to be married but insists he’d be happy either way; after his affair, he accuses her of pushing him into something. With the exception of Shell, the characters rightfully chide him for his irresponsibility and lack of communication. Implications that Maxine is unlikeable for being assertive are effectively refuted. Brian does, however, seem to morph overnight from a nice and mellow guy to a Nice Guy TM. Personally, I think his passive-aggression could have brought their marriage to a believable end without the infidelity, which struck me as a lazy way of advancing the plot. The depiction of Shell, additionally, made me cringe as she is largely an other woman stereotype who is repeatedly described as “trashy” and prone to sleeping around. Though Maxine admits that plenty of women try out the “video ho” look, she details each of Shell’s skimpy outfits as if this is an appropriate stand-in for characterization.

All in all, I found much to like about Maxine Banks but don’t consider it in the same league as Lori Aurelia Williams’ previous works. Still, my qualms have hardly diminished my eagerness to see more from her. Despite the diversity in Williams’ catalog of characters, queerness has never before come into play, and I found Demonee’s storyline to be an auspicious, if unsatisfying, beginning. Just as Williams’ first novel was mostly Kambia’s story, her newest belongs to Demonee. 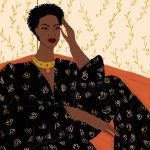