In this age of literary Jonathans, I am always on the lookout for some good solid realism by women, about women's experiences, that doesn't feel like it has to scream from its pink and lime green cover, "WARNING: YOU ARE ABOUT TO READ A BOOK ABOUT A WOMAN." Thankfully, I have found Katherine Karlin's new book. Send Me Work is an extremely thoughtful and often funny collection of short stories about people who also happen to be women who also happen to work.

Karlin writes about women’s experiences in jobs that have traditionally belonged to men, in industries where women are surrounded by men. The stories are set in shipyards, oil refineries, railways, and print shops—often places where Karlin herself has worked. Power dynamics certainly exist in these workplaces, often related to the women’s ages (most of them are fairly young) as well as their gender. A refinery worker is nicknamed “Little Shit,” for example. A customer service rep in a print shop visits an Orthodox Jewish client and family member who blames all his problems on women and can’t shake her hand. A teenage New Orleans shipyard worker deals with some harsh stares from other women workers as she learns to weld on her lunch break—although in this story the workplace politics, which Karlin describes with humor, subtlety and restraint, pale in comparison to the character’s at-home struggles amidst the wreckage of Hurricane Katrina (written with the same subtlety, now devastating).

But thankfully, these are not stories about women who are constantly being sexually harassed or losing promotions to men who aren’t as talented as they are—although these things certainly do happen in the real world to women who work. Karlin seems less interested in the unfairness working women often face than in the matter-of-fact place of work in their lives. These women don’t work because they “have to” or because they have something to prove, and the hands-on labor that they do isn’t romanticized—they just work. Work is exhausting and not always fun, but everybody has work to do, and it’s often how we learn about ourselves. In each of these stories, a character comes to understand herself or her circumstances more deeply through her working experiences.

One of my favorite stories in the book, “Seven Reasons,” is about how difficult it can be to keep going. The character in this story is a railway worker who half-seriously considers suicide on the job.

Especially if you are not the type to seek revenge, if you have no one to punish and would just as soon avoid the grand gesture, the Biblical language, the opera. If it’s simply a case of not being able to move from one minute to the next, the railroad provides a barrel of choices, any of which can look like a credible accident. Just pick one.

And if there are people who work along the railroad who haven’t thought of this, well, they’re just not thinking.

In sections with headings like “Rage,” “Futility,” and “Regret,” she narrates the daily struggles and painful emotions related to her work. When she witnesses an actual suicide on the tracks, it shakes her, and she crouches next to a coworker, who offers her a Tic-Tac. “They don’t have much of a flavor, but put enough of them in your mouth at once and you can detect a trace of mint. It’s something, I guess.”
“Have a Tic-Tac” can’t exactly be considered a solution for this character, but it’s nonetheless a satisfying way to end this story. It’s clear that this character will keep going, despite how hard it is. All of the stories in this collection have this quality—you get the sense that after the story ends, the work will continue for a long, long time, and it will mostly be hard, but it will also be satisfying.

Last June I wrote about an imaginative and sometimes disturbing collection of short stories by Alissa Nutting called Unclean Jobs for Women and Girls. I compared it with a hilariously outdated book I’d once come across at my (formerly women’s) college called Careers for Women, that advocated only careers such as “Homemaker” and “Secretary.” In that review, I offered up Nutting’s collection as a response to that book, and in this post I’d like to offer up Karlin’s. Where Nutting’s book can be read as an outrageous eff-you to the outdated notion that women who work must adhere to certain professional categories, Karlin’s Send Me Work is an understated, beautifully written book about the experiences of women of various ages and ethnicities and temperaments, living in various times and places, working various jobs. Read it. 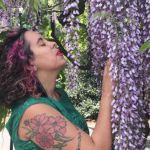 by Wendy Elisheva Somerson
Surrounded by depictions of gay sameness, I was thrilled to read two brilliant new books that came out this year by queer women.