One of the lesser-discussed hassles of identifying as feminist is that people often think you'll be super-delighted to engage in some good old-fashioned man bashing. Those men, you know? What's up with them never being able to pick up their damn socks? And the belching? And like I care about whether the Red Sox will ever be in the World Series again. I should totally just get a dog—at least he'll be satisfied licking his own balls, instead of whining that I never do. Amirite, ladies?

So it's important, every so often, to stress that feminism does not equal female chauvinism. I was reminded of this when the review copy of Undateable: 311 Things Guys Do That Guarantee They Won't Be Dating or Having Sex arrived at Bitch Media HQ.

Undateable does not bill itself as a feminist text. It's a dating manual: As authors Ellen Rakieten and Anne Coyle write in its introduction: "There's an unspoken list of things men say, wear, or do that will pretty much guarantee that the girl you just took out to dinner won't ever want to see you again."

So, basically, it's the real-life version of Liz Lemon's "dealbreakers" book, only  not funny, and also instead of urging the ladies to shut down relationships for sensible (if insane) reasons—he's appeared on To Catch a Predator, he's wearing a giant diamond "Open Marriage" necklace—Undateable encourages them to be shallow, closed-minded, and incredibly sexist.

That's not the point of the book, of course. According to its press release, it's a "hilarious and informative" addition to the "zeitgeist of today's dating landscape." But pop culture continually pits men and women against one another (you read Kelsey's post about women's grand victory over the menfolk, yes?), and real-life men literalize this battle of the sexes in ways that are both douchetastic (see Chris Surette) and tragic (see George Sodini), and Undateable is one instance in which women may "win" by lording their sexual veto power over men, but look like far bigger assholes for having done so.

The book's three sections advise men "What Not to Wear," "What Not to Say," and "What Not to Do," and each entry is coded with symbols denoting the gravity of the offense. (Wearing your cell phone on your waist, fellas, is a red flag, while sporting Ed Hardy gear is dire enough to merit a "no sex" icon.) The first section is the most brutal: Soul patches, hairy backs, tighty whities, black jeans, rolled-up jeans, sports jerseys, porkpie hats, eyeliner, cut-off shorts, "emo" hair, leather pants, hawaiian shirts, turquoise jewelry, tube socks, body piercings, Speedos, dyed hair, multiple tattoos, wallet chains all get smacked down, as having personal style of any kind is apparently a dealbreaker. This section is also where the authors choose to pick on fat men, slapping "'Pregnant' Man" with a kiss-of-death icon, and marking a picture of a chubby guy in bike shorts—a whole cycling outfit, actually, complete with helmet and, um, an actual bike—with the words "Just. Plain. Wrong." And—bonus—the authors crack a domestic-violence joke when addressing the subject of men wearing aprons when they cook: "Your pumps better match your apron or we're going to have to come in there and beat you again."

So: If you're a dude, here's the prescription: Don't wear a porkpie hat, don't have tattoos, don't take up biking if you don't have the ropy physique of a Tour de France champion, and don't cook in an apron. After all, it's better to have grease stains on whatever item of shirting the authors deem acceptable than to wear something a woman might wear! And while we're at it, what are you doing cooking in the first place? So girly—that's a dealbreaker right there!

A common thread throughout the book is that men shouldn't be macho (the "What Not to Say" section takes them to task for announcing their farts, naming their penises, or using any phrase popularized on The Sopranos) but under no circumstances should they be even slightly feminine. How else to justify putting a man who owns a cat, likes dancing, or is lactose intolerant on on the no-nooky list? (Rakieten and Coyle also warn against men with "car tchotchkes" like fuzzy dice or air fresheners, asking "You know how little girls put streamers on the handlebars of their pink Sting-Rays? This is the same thing.") I may be biased—since I married a man who has owned several cats, is lactose intolerant, and who, when I met him, was wearing tube socks pulled up to his knees (don't tell me that's not hot, ladies!)—but I'd argue that Rakieten and Coyle's Goldilocks approach just muddies the waters for men already confused about societal gender imperatives. Sure, we all have our turnons and turnoffs, but someone out there is sleeping with the guy who pairs socks and sandals, right? Implying that a man is no more than the sum of his bald spot and pleated pants is no different than dismissing a woman because she's  not Scarlett Johansson.

As with many books we get for review at the Bitch office, I'm not totally sure who the intended audience for Undateable is. Ostensibly, it's men, since the text addresses them as "you," but they also seem to be courting women in the same way that mass e-mails titled "100 Reasons Why Chocolate is Better than Men—FUNNY! : )" do—in order to encourage us to shake our heads and have an awesome chuckle over how clueless men really are and how it's totally not sexist to objectify them because they've been objectifying us for years!

So if someone gives this book to you, or tells you it's funny, or sends a mass e-mail about it, and also about 50 ways to use dog-training tips to train your man, why not use it as an opportunity to say, once again:

Feminism and chauvinism: They're not the same!

Ok, obviously everything in the book is stupid anyway, but how on earth can you even list "lactose intolerant"? I mean, the guy can't help it. If you're turned off by soul patches, then that's your thing but how is he supposed to change the way his body digests dairy products? That's like saying men should never be diabetic. "OMG, he can't inhale a pan of brownies???? What a loser!!!!"

if it actually gave men some information about what it means to be a true partner in a romantic relationship. I would think that if a man were to exhibit some of these qualities on a date that could increase his chances of being thought of as a possible life-partner. The whole battle of the sexes thing is counterproductive because it can lead to conditions like Surette Syndrome as well as full fledged misogynistic acts of violence as described in the article above. Don't believe the crap about men being from mars and women being from venus.
My advice for men who are single and would like to learn how to develop the personality and skills to make them more attractive as a potential partner is to listen to women both by reading magazines like Bitch and Herizons as well as actually listening to what the women in their lives are saying. It might be nice to learn to communicate effectively which involves not only learning how to express one's self but also how to listen to what the other person is saying. People will often express their needs/desires if they believe that the person listening is really interested.
Any way, I am getting off track. I am certainly not ready to be an advice columnist. I'll shut up now. :-)

I love Bitch! Thanks for all you do.

I would like to see more media by men sharing how they reevaluated their masculine identity, ways of communicating, and actions beyond just the context of romantic relationships with women (though I know that, for many men, these relationships are often an important space for introspection and change). Masculinities mediate relationships (romantic and platonic) with other men, family, coworkers, and friends, and one's relationship to oneself. Far too often, the discourse ignores the fact that men have a lot to gain, themselves, for their own sake, from reevaluating and transforming their masculine identity.

The destructive, juvenile hypocrisy of Undateable is tragic, and I applaud Bitch for calling it out for the tripe it is. The real reasons why a reasonably self-aware woman gets turned off by a man generally have little to do with anything in that book.

A few years ago a work acquaintance of mine wrote the best male/female relations essay I've ever read. Eschewing both superficiality and chauvinistic potshots, she broke down the serious issues between genders into truly helpful, thoughtful categories: Entitlement, Cajoling, Patronization, Dismissal, and Co-opting the Argument.

The post, entitled "Don't Be That Guy", is basically a manual for how to be a feminist ally. It is so well-reasoned and non-judgmentally presented that it stands as a manual for a number of different relationships that deal with power differentials. It could just as well be applied to white people conducting themselves with people of color, or straight people addressing gays. And women, while reading, it, will most certainly be surprised by recognizing some of their own behavior. I honestly feel is should be required reading for all people.

There is some swearing in it, so sensitive readers, use caution:

i suppose my list of dealbreakers would probably be much different than those in the book. items that would be included in my dealbreaker list: making me look bad by having a real career, finding that sitcom with charlie sheen in it funny, or not smoking.

There is no doubt about it. After thoroughly reviewing the contents of this post I can only conclude that I am undateable.

Relevant: "We Were Feminists Once" Available Now! 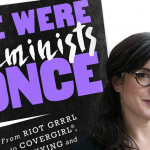 by Bitch HQ
From Riot Grrrl to Cover Girl, the Buying and Selling of a Political Movement