What if the Rapture happened, but it wasn’t like anyone had expected? In fact, what if “Rapture” might not be the right word, considering that the millions who vanished were of numerous different faiths and the date didn’t align with anyone’s holy texts? How would the people who lost everyone they loved live with their grief, and how would untouched families manage their guilt?

The Kirkus Review hails The Leftovers as Tom Perrotta’s “most ambitious book,” a claim that at first seems obvious for a writer whose previous works have centered on realistic suburban angst. However, despite its more imaginative set-up, The Leftovers is about exactly the same things as Perrotta’s other novels: struggling to find contentment, doomed love affairs, and growing up.

As one might expect, The Leftovers is no Left Behind. In fact, the novel is entirely character-driven and not concerned with providing answers regarding the mass disappearance, though many within the story—the titular “leftovers”—are.

The story begins three years after the event, in a small New England town called Mapleton. The Garveys, despite being the rare family left in tact after the big day, are now in shambles. The mother, Laurie, and collegiate son, Tom, have joined two of the cults that have cropped up to try and explain what happened, and teenaged Jill has abandoned her academic goals to smoke pot and play passionless sex-based games with similarly depressed peers. Only the father, Kevin Garvey, appears to be unscathed. Kevin has been appointed mayor, most likely because he seems disproportionately stable, but the troubled thoughts he suppresses find other outlets, such as an intense attraction to Nora, who lost her whole family and is thus a vessel for the sorrow Kevin cannot know.

And there lies my biggest qualm with The Leftovers: Why should we care about Nora as a love interest when she’s infinitely more compelling as a character? The passages exploring Nora’s headspace and rituals to get through each day are heartbreaking and genuine, but her story arc is nothing more than a tepid romance with another lonely person. Honestly, she deserves better, and I have serious déjà vu.

Though I’ve enjoyed all of his books, I’ve never been able to shake the feeling that Perrotta has a lady problem. The women of Bad Haircut are little more than The One Who Sleeps With Him Because She’s Sad About Being Pregnant or The One Who Doesn’t Sleep With Him Because She’s Gay. The Wishbones is the story of a thirtysomething stepping out on his boring/adoring girlfriend with a sassy youngster who could have been written by Chuck Palahniuk. (I’m even more uneasy knowing some of the main couple’s scenes are lifted from Perrotta’s own life.) Little Children and The Abstinence Teacher include the points of view of strong, complex women, but their storylines revolve completely around men, and their liberal politics are presented as obstacles to finding TRUE LUV.

On the other hand, the “But the men suck too!” defense is more salient with Perrotta’s novels than with, say, Before the Devil Knows You’re Dead. The Wishbones’ protagonist is pathetic, Joe College’s is a brat, and Mr. McAllister is arguably as depressing as Tracy Flick. All demand our sympathy as protagonists, though, amidst their manpain, and the pattern of women just pining after dudes while said dudes just… live their lives persisted—until now.

In contrast to the disappointment of Nora, Laurie’s story is rich and terrifying. The cult Laurie has joined, the Guilty Remnant, believes the mass vanishing was indeed the Rapture and is centered around invading others’ lives to make sure they do not forget what has happened. This entails undisguised stalking of Mapleton’s other citizens and a vow of silence. Laurie has resigned herself to the life until she meets Meg, a twentysomething recruit, and begins to remember what it’s like to have emotions as an individual.

Oh, and several members of the Guilty Remnant have mysteriously turned up dead.

It’s to Perrotta’s credit that Laurie remains believable; in time, her decision to leave her life for a spooky, ritualistic compound even makes sense:

[S]he’d needed to escape […] the unreality of pretending things were more or less okay, that they’d hit a bump on the road and should just keep on going, attending to their duties, uttering their empty phrases, enjoying the simple pleasures that the world still insisted on offering. And she’d found what she was looking for in the G.R., a regimen of hardship and humiliation that at least offered you the dignity of feeling like your existence bore some sort of relationship to reality, that you were no longer engaged in a game of make-believe that would consume the rest of your life.

As a matter of fact, almost every character has understandable motives, even the Reverend who publishes lists of the departed’s supposed misdeeds (e.g., extramarital affairs and “bisexual college years”) to try and prove the event was no Rapture. After all, what religious officials would want to believe they didn’t make the cut? Thankfully, though, not even Perrotta wants to redeem Holy Wayne, the leader of the group Tom has joined. Wayne’s religion is based around hugs, but that doesn’t succesfully disguise the fact that he’s an unrepentant pedophile. The Leftovers opens just after Wayne’s arrest, when Tom finds sixteen-year-old Christine, a “spiritual bride” of Wayne’s who believes she is pregnant with the Messiah, on his doorstep.

While Perrotta’s novels have had more than a whiff of autobiography before, it’s hard not to wonder why he gave this character his name. Tom is a gullible, doofy everyman who would have been right at home in Joe College. Every move he makes is predictable, from his fluctuating loyalties to his hapless crush on Christine, but perhaps that’s the point: Anyone might end up as major-player cultists under the right circumstances, even bland college students with good intentions.

Still, Jill is at the heart of The Leftovers. Since she had been sitting next to someone who vanished, Jill may have less survivors’ guilt than the rest of her family, but her sense of futility is overwhelming and is reinforced by her lack of a neat, clear story arc. For those who can’t suspend their disbelief for long enough to join a shiny new religion, what is left after an event of this magnitude? Jill dabbles with different coping methods, tries to connect with new people, and becomes disillusioned with her former plans for college, but there’s no answer for what’s next—nor should there be.

One minor character comments, in a rare nod to the title, “we just had turkey for Thanksgiving and the leftovers lasted forever. It’s like, enough with the turkey already.” When a person’s been excluded by something bigger than anyone can imagine, what’s left to do? 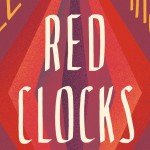 by s.e. smith
“Red Clocks” leaves a lot to be desired.