Claude Monet called Herman Bang’s wartime Tine “the world’s first Impressionist novel,” floating as it does between characters, events, and chronology. Alexandra Harris’ short, delightful book Virginia Woolf, published last fall, is a similarly Impressionist biography. The move to present Woolf—a writer who has been explored, revealed, questioned, adored, criticized, and lionized, over thousands and thousands of pages in the 70 years since her death—in just 192 pages and 10 chapters, is a bold one, to say the least.

From the book’s mission statement of sorts:

It is meant as a first port of call for those new to Woolf and an enticement to read more… [I]t will also set off a few fresh ideas (or arguments) in readers long familiar with the material. (8)

I think it succeeds particularly well in its first ambition. Harris writes about Woolf gently, even lovingly, as when she elicits her “hooting laugh,” or the importance to Woolf “of being safe and still, while acutely aware of the great world beyond” (14, 20). Politically speaking, it is more important to this biography, based on number of words allotted, to mention that Woolf was a sensual critic, describing the tastes and textures of a work, than it is to remark on her anti-Semitism. On this and many other more contentious points in Woolf’s life (homosexuality, war politics, even bipolar disorder), Harris chooses a sort of criticism-lite approach. Perhaps this is to “draw on and on” new readers and critics of Woolf, introducing issues in the context of there being always more to say, but Harris is also in danger of seeming to “polite” some of the author’s more problematic or complex traits into near-obscurity. Those looking for a scoop on childhood sexual abuse, homosexual encounters with fellow writer Vita Sackville-West, or biting comments about Katherine Mansfield—the only writer of whom Woolf openly confessed to being jealous—have not come to the right place with Virginia Woolf. Brevity does, happily, kill the risk of turning Woolf into an epic, untouchable historical figure, but it certainly does NOT make her transparent.

My description of this book as “delightful” was deliberate: it is a revelation of Woolf’s quiddity which is lined with delights. It is not devoid of lacunae, though, which you could guess based purely on the page count. Harris notes in the afterword that many readers feel the currently published catalogue on and of Woolf must by this point give a complete portrait of the artist, which is necessarily false (164). This book doesn’t even try for completeness.

Previously: Five Righteous Books of Poetry that Changed My Life 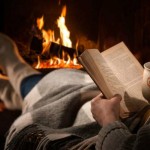 by Evette Dionne
If you love the books, pass on the gift of literature to a fellow bibliophile.