Big Advertisers Are Watching You

I am not sure if the media-savvy among you have already heard of this phenomenon, but apparently the newest trend in super-creepy-and-invasive advertising is ads that watch you watch them. This new technology, made by a company called Quividi, uses face-tracking technology (and yes, I guess that is a thing) to determine the age, race, and gender of the person viewing the ad. Then, the ad may change based on who is watching. WTF?

Ideally, the technology is supposed to save advertisers money by allowing them to target specific audiences. For example, a woman walking up to an ad screen at her local mall might see an advertisement for lipstick, while a man who walks up after her might see an ad for aftershave. Kids might see ads for candy, older people for adult diapers, and so on.

The technology is accurate in guessing which demographic a person belongs to roughly 80% of the time, which is enough to make advertisers interested in the product. Apparently, the cameras behind the screens look mainly at cheekbones, eyebrows, and “fullness of the lips.” Ew. In their defense, the people at Quvidi say that the cameras will not store data but will instead only use images of people to determine which ad they see, and then erase any records once the ad has been viewed.

I don’t know about you, but this still sounds a little too Orwellian/Huxleyan/Saundersian/insert-your favorite-dystopian-future-author-here for my liking.

To me, this reads as a way to even further compartmentalize people and make sweeping generalizations based on race, gender, and age. Also, I don’t know about you, but I don’t want to have to worry about being on camera every time I walk by an ad kiosk. Sure, it might mean that I have to see less diet cola is ok for dudes too commercials, but I don’t necessarily want a miniature camera to censor what I do and don’t see based on how I look.

I want to hear from you, though. Are these “smart” ads the wave of the future, or just another way for advertisers to invade our privacy and give us the creeps?

i wonder how the government is already utilizing this technology..you know they get the good stuff first. Honestly, I can't help but imagine that they're already filming me in the shower somehow. If people are open about this technology and google earth, what else could they have? Also, it's not as if we can know how exactly tehy are using this information.
I don't like being spied on at all.

This sort of reminds me of all those ads I see on myspace. I mentioned it to a male friend and he said he has ads that pertain to men, and are totally different form mine. I always think THAT is a little creepy. Especially the ones with the guys that are supposedly chatting with "me" via web cam.

I dislike this concept as much as the myspace ads. I do not want to see ads based on my age and gender. It's weird and sort of invasive.

I heard about something similar to this--that "they" were developing technology to identify what station your car radio was tuned into from a censor on one of those change-y billboards and thus identify your demographics and present you with an appropriate ad. That freaked me out even though I rarely listen to the radio in my car.

This, even though similar, is even more creepy because not only is it eerily invasive on a personal level (as in, it "studies" your person) but it also, like all advertising, makes simplistic generalizations about gender/sex/race/age. It's not as though I expect the ad/marketing world to be pillars of complexity (at least in any humanistic sense). I don't want catered advertisements--I want some fucking reprieve!

I took a class on Media & Society where the (amazing) professor posited that advertising in the near future would become more streamlined and catered because of the technology available and the "science" of demographics. This is to ensure that nary a dollar is wasted on a demographically disinterested consumer. Bleh. Bleh. Bleh.

How creepy is that? This is something that only targets what I look like and not who I am as a person...; this technology is an instant dislike for me. Its highly invasive and I'm certain that what is being advertised will not appeal to me 99% of the time. Sigh. What will they think of next?! 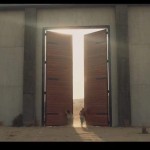