Director Tim Burton is best known and most beloved for his stories of odd, outcast men, from Edward Scissorhands to Ed Wood to Charlie and the Chocolate Factory. The stranger-than-fiction biopic Big Eyes is only the second of his non-animated pictures to have a woman at its center, and, perhaps not surprisingly, it’s one of the richest portraits he’s brought to the screen yet.

The real-life story of Margaret Keane, whose paintings of saucer-eyed waifs, often holding matching pets, defined 1960s kitsch, is one of a woman hamstrung by patriarchal restraints, who found her artistic passion mutated into a grotesque secret life. In the new film, we first meet Margaret (played by Amy Adams) as she’s fleeing her first marriage with Jane, her young daughter, by her side, hurriedly packing up her paintings and driving north to San Francisco to make a new life in the bohemia of 1950s North Beach. When she meets Walter Keane (Christoph Waltz) at an outdoor art fair—hawking oils of Parisian street scenes, the very picture of a Francophile painter—he seems almost too good to be true. Their quickie marriage seems necessary: Citing single motherhood as inherently “unfit,”  her ex-husband threatens to take Jane away. 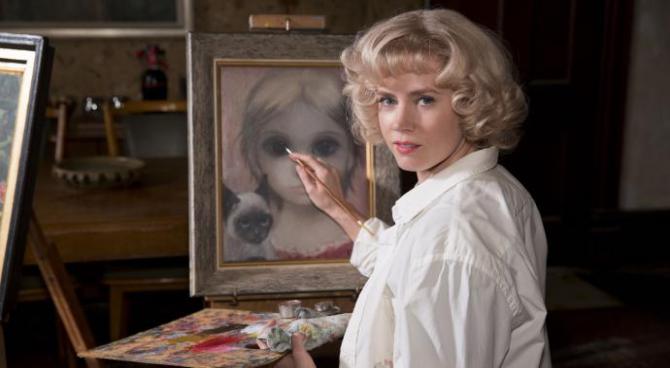 Check out the early rendering of Grumpy Cat on the left.

Indeed, Big Eyes (which was written by Scott Alexander and Larry Karaszewski with the cooperation of Margaret Keane) is explicit in contextualizing Margaret’s plight as one that was normal in a time when women were simply considered lesser than men in almost every way. When Walter begins to become insistent on taking credit for her paintings, saying it’s simply good business sense (“People don’t buy lady art”), Margaret heads to a nearby church for her first-ever confession. But she finds that even God doesn’t seem to be on her side. “Your husband is trying to make the best of an imperfect situation,” says the priest condescendingly. Locked first in a turpentine-scented garrett and, later, in a poolside studio, Margaret lives a midcentury version of The Yellow Wallpaper, locked away from friends and family and told a truth that she eventually comes to believe. When, at an early art opening, a patron enthuses, “Your husband’s quite a talent! Do you paint too?” Margaret seems to be racking her mind to remember, finally stuttering “I don’t know.” It’s especially painful to see how Walter’s gaslighting of Margaret’s extends to Jane, her longtime muse, whom Margaret literally shuts out of her studio to preserve Walter’s fiction. When he tells Margaret, in public, that he’ll “have [her] whacked” if she reveals the truth about the paintings, it’s able to be horribly comedic only because Waltz perfectly portrays the impotence underlying Walter’s rubbery-faced egomania. But it’s clear that the real-life threat was very plausible. In a recent profile in the San Francisco Chronicle, Margaret recalls:

“Back then, women kind of went along with their husbands, didn’t rock the boat. He finally wore me down,” Margaret says. “While we were fighting this out at home, the paintings were just flying off the walls. Posters were selling. It was unbelievable. It snowballed overnight. I kept getting in deeper and deeper. I didn’t know how I could get out of it. I lost all respect for him and myself, and lived in a nightmare.”

Even after Margaret and Jane fled once again—this time for the relative paradise of Honolulu—and Margaret regained her backbone and told the truth, Walter continued to beset her with threats. The resolution to the court case to establish the real artist was, logically, a paint-off: The no-nonsense judge provided each Keane with art supplies and an easel, and an hour later it was all over. In all the discussion of the meaning and the quality of the Keane paintings, no one had ever questioned Walter’s ability to paint; that Margaret had to, in essence, paint her way into legal legitimacy speaks volumes about women’s place at the time. It’s likely that Big Eyes will be called a “feminist” film only because that term is used increasingly loosely for any movie in which a woman gets the lens for more than 10 minutes, but it’s more a film that shows exactly why feminism was—and remains—such a revolutionary concept. 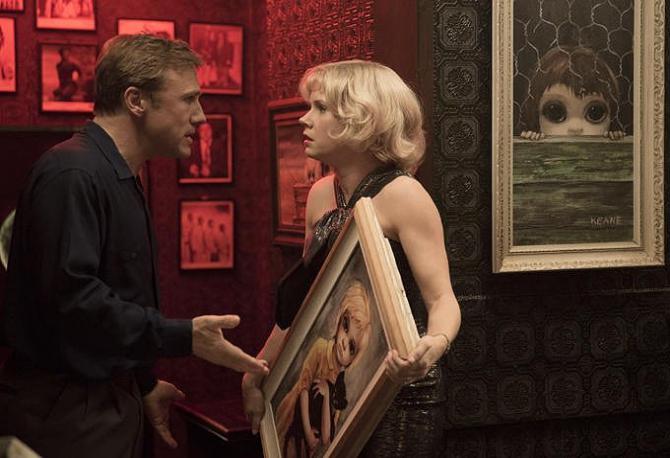 Big Eyes is just as pointed in its take on how “art” is defined. Walter’s desperation to get famous on his wife’s labor is in part fueled by a rivalry with the gatekeepers of the fine-art world, personified by a snooty San Francisco gallery owner (Jason Schwartzman) and the New York Times art critic John Canaday (Terence Stamp), who said that the Keane paintings were “synonymous among critics with the very definition of tasteless hack work.” Walter’s recognition that people don’t want paintings so much as they want reproductions of paintings was a spark of crass consumer genius that rivaled Andy Warhol’s. But his temper, already simmering with fraudulence, was brought to a boil by the dismissal of “his” work as pandering sap. (Art critic Kenneth Baker would later call Keane paintings “the pornography of sentimentality,” which hasn’t dimmed either their value or their influence on such current artists as Mark Ryden and Yoshitoma Nara.)

It’s notable that the film is, for Tim Burton, decidedly less Burton-esque than it might have been. Though there’s rich territory to mine—San Francisco jazz clubs and beatnik chicks, a scene at the 1964 World’s Fair in New York—surrealism and quirk are kept to a minimum. One scene, in which Margaret walks through a supermarket containing an outsized display of Keane posters, calendars, and figurines and begins to see their giant eyes on everyone around her, serves to neatly evoke her increasing disassociation. The fate of cheesy paintings of sad-eyed children and kittens isn’t generally the stuff of big-screen drama, but the performances of Adams and Waltz make for a maddening, fascinating film—a standout in Burton’s celebrations of gently triumphant oddballs.