Bitch Popaganda: It's the Finale Countdown!

Welcome back to another episode of Bitch Popaganda! Tune in as Andi, Brian, and Kelsey recap the season finales of AMC’s The Killing and HBO’s Game of Thrones. Also in this episode: Mary McNamara’s recent LA Times article and the burning question, Why do we care about these shows so much?

Links from this episode:

Faves from this Episode:

You can listen to the podcast right here, or you can subscribe to Bitch Media on iTunes to download it and listen on the go. (The episode is also available at archive.org.)

I think you guys were disingenous in your discussion of many people's negative reaction to The Killing finale.

Many people were aggravated by not finding out who the killer was because the other aspects of the show were no longer satisfying. The pacing of the show was <em>terrible</em>, most of the characters were unlikeable, it was difficult to care about Rosie Larsen's murder for Rosie's sake because the show never gave us a portrait of her, and [because we knew the mystery would not be solved for (at least) twelve hours] the red herrings lacked the intrinsic tension of whether or not the suspect had killed Rosie. The red herrings were also structured in a way that, except when Richardson was briefly a suspect, we mostly didn't see how the suspect's life was disrupted by being suspected, we mostly saw the Larsens' reaction and the detectives pursuing an end we, as the audience, already knew was futile.

The only things this show had going for it were the acting (which many of us found difficult to appreciate when it was mired in terrible plotting and indifferent writing) and the promise of finding Rosie Larsen's killer.

The difference between this show and Twin Peaks, which you were struggling to locate, is precisely the weirdness of the Red Room and the conversations in other languages. In addition to the question of who killed Laura Palmer, people were interested in the weirdness of the way the world of Twin Peaks was set up, they wanted to explore the worldbuilding as well as the procedural mystery.

There's no such pleasure in a naturalistic, depressingly wet Seattle as depicted on The Killing.

I finished watching the show last night -- solely because I wanted to join the conversation -- and I'm not exactly sure how I feel, though I'm pretty sure it is more positive than negative. What struck me right off was that Mireille Enos doesn't look like the typical cop TV starlet, nor do people respond to her in the same manner most of the time. In a lot of other procedural shows, men are always calling the women bitch under their breathes or "in the heat of the moment," or they're coming on to them, or calling them "sweetheart" and "hon" and all that. Sarah Linden seemed to skate through rather unscathed. I was surprised that she wasn't poked fun at much either, despite being a quiet, intense, and slightly weird individual. They only outward emotional conflict she seemed to have was with her social worker, Reggie I think the name was. On top of that, she is as small in stature as force of personality, and doesn't have a lot of socially-defined beauty traits. The character, by every right, should not have been the focus of the story if we judge The Killing by other popular shows in the same grouping.

Yet I was intrigued by it and I watched steadily over the course of 2 days. I don't know why. I think I'll tune in next season actually.

As an aside, do you think we'd (meaning the audience) will ever have a chance of getting a bookclub-esk podcast for current popular books? Either as an episode of Popoganda or it's own spot? 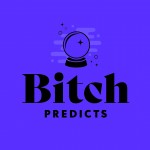 by Dahlia Balcazar
Bitch senior editors Evette Dionne and Dahlia Grossman-Heinze on who they think will win—and who they want to win.