We've had Karaoke-themed BitchTapes in the past, but as an enthusiast of the sport who has seen far too many dud performances (and given a few myself), I'd like to revisit the topic and offer some helpful Karaoke don'ts. Let these songs serve as a guidebook of sorts, to keep you from looking like too much of a fool the next time you get on the mic.

10 Karaoke Don'ts from BitchTapes on 8tracks.

1. The Song That's Out of Your Range I've chosen Prince's “Kiss” to illustrate this point—because few among us can hit those high notes—but it could be applied to songs in the low registries as well (I myself have bombed doing Neil Diamond's “Girl, You'll Be a Woman Soon”). No matter how much you love a song, don't try it if it's super high or super low. (See also: “Heart of Glass,” “Folsom Prison Blues,” “The Sign”) 2. The Song That is a Rap Look, no one wishes they could pull off a rap song more than me, but if you aren't an actual rapper you should leave the genre alone when it comes to Karaoke (trust me, I've been that asshole)—try rap's Karaoke-friendlier cousin R&B instead. Naughty By Nature's “O.P.P.” appears on this mix because I've seen someone do it, and it wasn't pretty. (See also: All other rap songs) 3. The Song That is Too Repetitive and Has a Massive Instrumental Break Yes, we all love singing the first verse of “Love is a Battlefield” by Pat Benatar. We do not love watching someone stand on a stage for minutes on end waiting for the last verse (and no one loves being that person either, unless you have seriously killer dance moves and are willing to keep them up for an extended period). (See also: “Hey Jude,” “Radar Love,” “Total Eclipse of the Heart”) 4. The Song That's Not About What You Thought it Was About The Rolling Stones' “Under My Thumb” is a prime example of a song that seems innocuous enough but is actually about crushing an ex under your thumb and turning her into “a Siamese cat of a girl.” Considering that Karaoke takes place in front of a crowd, songs like this can get pretty awkward. (See also: “Every Breath You Take,” “Afternoon Delight”) 5. The Song That Everyone Hates Hearing at Karaoke People who like Karaoke bars (and I count myself and my Bitch coworkers among them) undoubtedly have songs they hate hearing, usually because someone sings them every. damn. time. “American Pie” is not only played out as a Karaoke pick, it is also way too long. (See also: “Sweet Caroline,” “Bohemian Rhapsody”) 6. The Song You Don't Have the Chops For Karaoke is more about fun than it is about showing off your singing voice. And even if you're a great singer, there are some songs that you (very likely) don't have the chops to pull off. “I Will Always Love You” (the Whitney version) is one of those. (See also: “My Heart Will Go On,” “Someone Like You”) 7. The Song That Will Make Everyone Yearn for the Recorded Version It's one thing to choose a song everyone likes, but if you choose a song that everyone loves, you run the risk of reminding them how much they prefer the recorded version to the one you're doing. Any song by Otis Redding has the power to do that, but “These Arms of Mine” is particularly bad. It's not that you can't sing it, it's that you shouldn't. (See also: “Respect,” “At Last”) 8. The Song That Will Make Everyone Cry We all have bad days, but working them out on the Karaoke stage doesn't often turn out well. Sad songs make people sad, and a song like Bonnie Raitt's “I Can't Make You Love Me” makes Karaoke bar patrons weep silently into their cheap beers. (See also: “Fast Car,” “I Will Remember You,” “Take a Bow”) 9. The Song That's Way Too Long Some songs are far too long to perform live, especially if you are an amateur performing in front of drunk people who are waiting for their turn to perform something. “Paradise By the Dashboard Light” by Meatloaf is also an awkward duet where the female part doesn't start until the halfway point, which makes it so much worse. (See also: “I Would Do Anything For Love,” “Stairway to Heaven”) 10. The Song You Weren't Prepared to Sing Different from not having the vocal chops, the song you weren't prepared for is too fast or complicated to pull off without practice. And like Kjerstin said when I asked her about this, it can be almost as bad when you ARE super prepared, “because everyone is like… seriously?” You either flub the song horribly or you're bragging that you've practiced singing something that probably wasn't worth the time you put it into it. “It's the End of the World As We Know It” is one of these songs. (See also: “We Didn't Start the Fire,” “Hook”) I know you Karaoke lovers have more to add here. What other songs should be taken off the books and never performed in front of a screen again?

Great summary of the dont's. In relation to rule 1 - I once chose 'Always Something There To Remind Me' because I was going through a Sandie Shaw phase, I didn't realise it was the '80s version. It was very bad and not in a good key for me. This has also happened with The Smiths, I was devastated.

I have a few songs on rotation that I've done before and know will work.

Best karaoke bar - Charltons, in Melbourne, Australia. Don't go on a weekend - too busy. Go midweek - you'll get to sing a couple or a few, and see the most interesting characters.

Something I love about karaoke - you don't have to be a good singer, you just need to perform with the spirit of karaoke.

My wife and I have our own karaoke machine, we have a "no ballads" rule, because ballads just bring down the mood at any party. Try to stick with uptempo stuff.

I disagree with #2 with the stipulation that one obeys #10. I do karaoke once a month or so (am going tonight!) and have suffered through many insultingly uneducated white-boy versions of classics (such as Outkast). Their familiarity with hip-hop's roots (cultural, historical, socio-economic, etc.) is made unforgivably egregious by not knowing the SONG. That being said, my friends and I have done songs like Salt 'N' Pepa's Shoop (kind of on the line between R&B and hip hop) because we had it mastered, love and have listened to it unironically for years, and the message isn't totally beyond us (having sooner wanted to "lick" a hot guy "like a lollipop should be licked" than being pulled over for "goin' fifty five in a fifty fo'").

When I think of favorite karaoke moments I always think of Cameron Diaz in "My Best Friend's Wedding" singing "Just Don't Know What To Do With Myself" by Nicky Holland. I think that exemplifies the karaoke experience, which to me isn't to showcase big voices with big egos who know they can sing; but to embolden people to have a rock star moment and HAVE FUN. In other words, I think mumbling is unforgivable, long selections are a bad idea (they should just take "Hey Jude" and "Iron Man" out of the books). but otherwise anything goes.

Any of the songs from "Grease", they are all so played out.
"I Will Survive" by Gloria Gaynor, We get it; you or one of your friends was recently done wrong.
Lady Gaga is hard to pull off too.

I have wowed karaoke parties before with my knowledge of all the lyrics to We Didn't Start The Fire. Booya. (7th grade geography projects stick with you forever.) And I love Paradise By The Dashboard Light—only the last time I tried it I realized to my horror that my partner COULD NOT SING AT ALL. What a nightmare. I tend to sing both parts of that song, though.

The one I'm sick of is Girls Just Wanna Have Fun. I never realized how repetitive and long the fadeout was until I tried it...damn near ran out of breath!

And "Killing Me Softly".
Please, world, stop singing that song in public karaoke spaces. It's a masterpiece, but without fail someone will pick it EVERY TIME. As a regular - sometimes weekly- karaoke-goer, it makes me want to pull my hair out. Please just sing it at home.

You have GOT to be talking about the Fugees cover of said song, not the Roberta Flack original. Which I wouldn't think would be overplayed at karaoke bars, and is a far better choice than her song "The First Time Ever I Saw Your Face", which involves a far too sparse arrangement to work in karaoke format. Though now that I think about it, her duet with Donnie Hathaway, "Where is the Love?", would probably be the best Roberta Flack song to do karaoke to. FYI, it killed me in a very, very HARD way (vs. "softly") when I found out there was a Black Eyed Peas song called "Where is the Love?". I felt that the title to such a perfect '70s song did not deserve to be sullied by that bunch of talentless, idiotic losers. 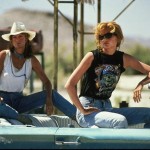 by Bitch HQ
A playlist of songs that you will want to belt at the top of your lungs as you drive cross-country.