Between the chance to pre-order Thought You Knew’s 2010 calendar (proceeds going to the Chicago Women’s Health Center), David Byrne’s new book, and the back-to-school commute that’s kicking my butt, I’ve got fall biking on my mind! Here are some songs to pass the time while you put on those fenders (I gotta put on those fenders…!), patch a tube, or just plain pedal!

Dinah Shore- Daisy Bell (Bicycle built for two)
Seriously, who needs marriage when you have a tandem bike?

Plasticines - (Zazie Fait de la) Bicyclette
This french song doesn’t need too much translation (my favorite part is the na-na-na’s anyway). All you need to know is that Zazie rides her bike at night!

Adron - Bicicleta
This pretty little ditty comes is by Adrienne McCann, a New York-based singer-songwriter who sometimes sings and songwrites in Portuguese (so no translation available).

Be Your Own Pet- Bicycle Bicycle
All you need is two-wheels, baby! This punk band’s also done a cover of “Bicycle Race”, oddly enough, but writing your own song about bicycles is obviously cooler.

The Bicycles - B-b-bicyles
I think this is a good song to think about when you have to keep those knees pumping going up a hill! And also a g-g-good song all around.

Belle & Sebastian - Fox in the Snow
Was that last song not twee enough for you? Good, cause here’s Belle & Sebastian. Listen up for the second verse about a boy on a bike!

Queen - Bicycle Race
You know how it most definitely rains when you go out without anything waterproof? Or when your back tire gets a flat the day after you changed your front tube? Those terrible things are about as inevitable as this terrible song being on a mix about bicycles.

Melanie - Brand New Key
Another classic, and it’s timeless, and it’s also about rollerskates! (And creeping out your crush!)

Your forgot "Cycling is Fun" by Shonen Knife. 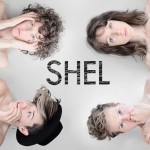 by Evette Dionne
SHEL creates soothing music that speaks to common experiences, including being afraid, falling in love, and finding your purpose.