BitchTapes: Breaking Out of the White, Male Punk Canon

For all of its progressive-leaning, status-quo-breaking, norm-shattering tendencies, punk rock still looks like a white boy’s club. Even after all of these years, the largest punk record of the year (Fucked Up’s David Comes to Life) was played by a band with one woman! There are also five other white dudes in that band! So let’s go back and look through the punk canon, find the overlooked bands and remind everyone that you don’t need to be white or a male to be punk.

1. Death - Keep on Knocking (alternative to: the Stooges)

Right around the same time the Stooges were trashing Detroit with their on-fire protopunk, three black brothers (Bobby, Dannis, and David Hackney) who went by the name of Death were doing the same thing, just a few neighborhoods over. Their music burns with the same 60s-inspired paranoia, but the bulk of their music went unreleased until last year, making this band tragically overlooked in the punk lexicon.

3. The Slits - So Tough (alternative to: the Clash)

The Clash wrote mediocre songs fusing punk with a bunch of genres, but the Slits wrote great songs injecting punk into just one thing: reggae. Frontwoman Ari Up became a pivotal musical figure for the burst of U.S. riot grrl ten years later, but at the time she boldly lead a group of women where few women could go. Even though the Clash brought them along on tour (and dated them from time to time), the Slits never broke into the same critical pantheon as their London counterparts. See also: the Raincoats, Lilliput.

The Trashwomen excelled in a genre of trash that was dominated by men: garage rock. Playing around the same time as thee Headcoats and the Mummies, these three women perfected a scuzzball version of surfy rock that has seen resurgence in the Bay Area scene in the past decade. Of note: controversial Oakland rapper Kreayshawn’s mother was a Trashwoman.

Los Crudos took on little-recognized tradition of Chicano punk, updated it to ’90s hardcore standards, and used their shows to spread a message of community empowerment to Latino communities, starting in their own neighborhood of Pilsen in Chicago. Their music is just as brawny as its hardcore counterparts, but Los Crudos put their minds into their music, spreading positivity.

Los Crudos frontman Martin Sorrondeguy decide to hang up the sweat-soaked, ripped towel and tackle another pressing issue for the punk community: homophobia. He founded the queercore band Limp Wrist to combat the beefed out masculine image of hardcore.

Post-punk’s meandering, galloping style found a muscular conduit in the four women of Electrelane. As opposed to some of the other droll bands that drew from post-punk’s past (Interpol, I’m looking at you), Electrelane actually added something invigorating to punk’s vocabulary.

Okay, I’m kind of cheating—Foreign Object’s frontwoman Megan is in another Massachusetts hardcore band, Ampere, but her new band Foreign Objects hasn’t found the kind of critical adulation as Ampere—yet. Amy Klein, all-around-excellent writer, activist, and you know, guitarist for Titus Andronicus and Hilly Eye, no big deal, has written several times about what an inspiring figure Megan is for her.

This band manages to remain mysterious in an age of the internet, but I do know that they hail from Austin, Texas and are make genuinely exciting music, in the vein of early 80’s anarchist punk, Factory Records doom and gloom and good old garage rock solos.

Oh man, things really don’t get better than Grass Widow. These three women put out a self-titled album in 2009, channeling the stringy Dada-punk of the Urinals with Wire’s all-encompassing focus on texture and mood. Although they play with Bay Area garage punk superstars Ty Segall and Thee Oh Sees and get lumped in with other all-girl garage acts circa now, Grass Widow are completely in a league of their own.

I'd strongly recommend the band Girl In A Coma http://girlinacoma.com/ They have been my favorite band since I bought their first album.

I'm slowly starting to see a future where all bands have Smiths references in the names. Good rec!

appreciated for sure but super poorly researched.

<p>Now I didn't exactly hit the library looking up these bands, but you have to at least tell me <em>how</em>&nbsp;it was poorly researched, or else I'll never learn anything. If you think anything is missing here, say so!</p>

Bush Tetras! Boom in the Night is a great album to get you excited about post-punk.

Delta 5 is also magnificent! "Makeup" will make you wanna scream.

Cool list but did you really need to rag on The Clash? :/

Another amazing post-punk band that always seems to get overlooked -- The Au Pairs! I highly recommend the song "Come again"! There's a great live performance of it from the Urgh! A Music War film up on youtube. The whole album Playing With a Different Sex is incredible.

I think you missed two major bands that break the mold:

RVIVR: East moved West hardcore band fronted by the epically awesome Matt Canino. Unlike most bands, they actively sought a female replacement for a guitarist (?) recently. And they are fantastic on all other fronts.

I just appreciate seeing women in bands who rarely or never sing. not because I don't love female vocalists, but because it shows that women are being utilized on a level playing field (not because their voice better fits a genre).

These bands are also both alive and well and touring in RVIVR's case which is another plus since we need to support bands like them. 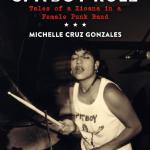 by Sara Century
In The Spitboy Rule, Gonzales's unique experience and perspective document a critical moment in punk culture.