Conversational song has to be one of the most overlooked music genres ever, next to songs that mimic whale noises and songs that have no rhyming whatsoever. More than just duets and trios, these songs feature singers responding to one another in verse and usually a recognizable narrative arc. These are great songs to listen to if you are feeling alone or want to have an awesome sing-along with a friend (or two).

Joan and Pete didn't write this song but gee whiz did they record one of the best versions out there, turning the traditional English lullaby into a conversational classic.

In this song R. Kelly calls up his best friend Usher (obviously) to tell him about the new girl he's fallen in love with. However, the two soon discover that they've been “messing with the same damn girl” and devise a plan to expose her deception and lies. In the “Same Girl” music video they actually discover that they've been dating identical twin sisters and not one adulterous lady, so the joke's on them. I think we all can relate to that situation, right?

Johnny and June win my vote for cutest couple on this playlist. Here, they talk about leaving each other for exciting, new lives in the city of Jackson. But don't fear. They were just acting, and stayed together until June's death in 2003.

In this blast from the recent past, Beyonce and Michelle try to help Kelly with her guy problems (“Girl, I can tell he's been lying/ and pretending that he's faithful/ and he loves you). Really, this song is about your best friends being there for you when you need them the most! Plus, the music video is Sex and the City-themed. Be sure to check that out.

6. Well it's True That We Love One Another - White Stripes & Holly Golightly

This is one of the few White Stripes songs in which we hear drummer Meg sing! Meg, Jack, and guest singer Holly Golightly all join in on this Elephant track about a complicated love affair with a reluctant third wheel.

This song is both spooky and beautiful. You may find yourself playing it on repeat all night as you sit alone in your living room petting your cat and singing along by the light of a single, red candle. Or not. Whatever suits you.

Most important conversational song ever. Meat Loaf and Ellen Foley sing their hearts out in this operatic duet, playing an old couple reminiscing about their early days together moving to their marriage years later in which they have grown utterly disgusted with each other. This is no doubt my favorite song on this list. But be warned: Settle in because it's over eight minutes long!

The precursor to “Same Girl” in which '90s stars Monica and Brandy fight over a guy who has been dating them both on the DL. Personally, I'd like to see them team up to expose the guy like Kells and Ush instead of fighting over him. I still love it, but to be honest I think the Glee version is better!

This song didn't make the list because I did not think of it until now. Obviously, it's a classic and everyone should have a listen to it!

Previously: Slowin' it Down, Whitewashed Rock

Personal, by Stars, is a heartbreaking example of this style.

I just watched Dirty Dancing, so "Love is Strange" has been on mind. Mickey & Sylvia are always good for the conversational song. Oh, and from another dancing movie: Bjork's "I've Seen It All" from Dancer in the Dark, featuring Thom Yorke. Great theme!

What?! No "Don't Go Breaking My Heart" by Elton John and Kiki Dee? Also, I really like "Fairytale of New York" by the Pogues and Kirsty McColl (objectionable language aside) and "In Spite of Ourselves" by John Prine and Iris Dement ( http://www.youtube.com/watch?v=F5axlwCBXC8 ).

"She's got the devil in her heart" 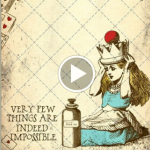 Journey through the looking glass with this list of tunes inspired by this book.