This week, I wrote about a new album from North Carolina musicians making songs inspired by that state's Moral Monday protests. Listening to their album made me hungry for a whole playlist of American protest music.

So, I spent way too long putting together this mixtape of great American protest songs. It's an eclectic mix of hip-hop, rap, dance, and folk—it includes no punk, because that's just my taste. My desire was to make a mix that's enjoyable to listen to, in addition to being all about politics. The songs address a wide range of issues in American history, including racism, sexism, police brutality, inequality, and war. I put some serious classics on there (like “Talkin' Bout a Revolution”) and some songs that make me laugh (like Peggy Seeger's “I'm Gonna Be an Engineer.”) I put Nina Simone on there twice because she's Nina Simone.

Ironically, when I bought Barbara Dane's song “I Hate Capitalism” on iTunes, there was a glitch and iTunes wouldn't let me listen to it. I had to buy the song off Amazon. What can I say? Capitalism is one tough glitch.

Please let me know your other favorite protest songs in the comments—there are so many more great ones that I didn't include here.

Songs of Protest from BitchTapes on 8tracks Radio.

Listen to over 200 Bitch-made feminist mixtapes on 8tracks.com.

My Favorite Mutiny - The Coup

Here's to the State of Mississippi - Phil Ochs

I Shot Mr. Lee - The Bobbettes

Party at the NSA - YACHT

Get Off the Internet - Le Tigre

Let Me Die in My Footsteps - Bob Dylan

Your Flag Decal Won't Get You Into Heaven Anymore - John Prine

Thanks to my friends for their over 100 recommendations for this mix. Special thanks to Beth Wooten, Alex Schechter, Cyrus Smith, and Alex Mahan, whose recommendations I used the most.

Wow! I love this post, and loved the mixtape.

Thanks for sharing, I'll look these up.

"Windowsill" by the Arcade Fire could fit. They're based in Montreal now, but the Butler brothers (at least) are originally from the US, thus making them the opposite of Saskatchewan-born California-associated Joni Mitchell.
Also, on the topic of Joni: "The Fiddle and the Drum" might be a more perfect protest song than "Big Yellow Taxi."

looking forward to listening to this in a minute, but first I had to return the favour with Sharon Jones and the Dap Kings "What If We All Stopped Paying Taxes" - killer tune!

Merican by The Descendents!

you missed some of the great Aboriginal singers and anti-colonial music that is out there.

Although Buffy Sainte-Marie was born in Canada, she did not cross any borders the borders crossed her.

or the AIM song: https://www.youtube.com/watch?v=RbORbJBEhBg written by Edward Benton-Banai but shared with everyone.

Generals by The Mynabirds

Anything from the Riot Folk collective.

Ok, maybe this isn't a protest song - but it's a beautiful song that makes me think of solidarity and friendship. It's beautiful: http://grooveshark.com/#!/s/Emma+Goldman/2BtkjK?src=5

The singer/songwriter is no longer with us, so there aren't many versions of the song available.

The World turned Upside Down AKA the Digger Song

This is not a complaint; it's all very enjoyable. I'm just curious about the choice of using covers. 'Big Yellow Taxi' is being performed by Le Pinne, an Italian band, which then presents the question of whether is it being sung in the spirit of American protest, or is it merely included as being an American song about protest (perhaps paying homage), regardless of who is performing it and at whom the song's sentiment was being directed. Also, 'Let Me Die in My Footsteps' is listed when played as performed by "notalentpoet," (who I am unfamiliar with), so perhaps this posting maybe should reflect that it is not Bob Dylan, but instead a Dylan cover (same with the 'Big Yellow Taxi.' I don't know how 8tracks works, so perhaps the poster didn't have the option of including the original when choosing the song, but it would make sense to give proper acknowledgement of who performed the song included in the list and who they are covering, as with the first song in the list.

Hiya - Some of the choices and credits depend are a result of what's available in the public library on 8tracks.com and Soundcloud. I purchased and uploaded some of the songs for this mix but, when they were available, I drew from versions available to stream on 8tracks and Soundcloud—so some of those are covers and on 8tracks.com, some of them are attributed to the person who uploaded them (like "notalentpoet") rather than the original artist. That's part of why I publish the track list on our site, since the credits on 8tracks are not always accurate. 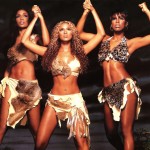 by Katie Presley
A mix for getting free from whatever’s holding you back.