BitchTapes: The I Call Your Name Edition | Bitch Media

BitchTapes: The I Call Your Name Edition

Let’s face it. Male musicians (and some female ones) have been writing songs about their female muses ever since the first teenybopper swooned for some nerd holding a guitar. The girl’s-name-for-a-title song is an important part of the pop music aesthetic, and one that I personally love. A song that is a straight-up ode to a woman I’ll never meet has always held a certain mystique for me, as it lets me speculate about who she is and what her relationship with the musician is really like. So today I bring you nine songs written about nine ladies: The “I Call Your Name” edition of BitchTapes.

The Tracks:
1. Peggy Sue by Buddy Holly
This song is so darned cute (I have long fostered an unrealizable crush on Mr. Holly, so I am biased). However, my mother Cynthia Louise has reminded me several times that the original was called “Cindy Lou” and Holly was asked to change it. Poor Cindy.

2. Susanne by Weezer
Clearly inspired by the great Buddy Holly, Weezer released this awesome jam as a part of the Mallrats soundtrack. As a MAJOR fan of both the band and the movie, I couldn’t love this song more. It kind of makes me wish my name was Susanne. (Of course, the only song I can find featuring my actual name is by the douche-y teen band Metro Station, so you won’t be hearing that one today.)

3. Cleo Cleopatra by Kari Lynn
Not all name songs are about someone the artist knows personally. Kari Lynn sings this song for the historical Cleopatra, whom she clearly admires. This track makes life on the Nile seem like so much fun!

4. Barbara Ann by The Beach Boys
The Beach Boys really know how to come together and make a girl feel special. One of the things I like most about this, the 45 version of the song, is that it has an outtake at the end where the band all sings different girls’ names and can’t quite get it together, but in a really good-natured way. Fun!

5. Jessica by Adam Green
Leave it to Adam Green to make me feel sympathetic toward Jessica Simpson (the inspiration for this track). It sounds like Green honestly wants Jessica to heed his advice and cheer up a little bit.

6. Mary by Scissor Sisters
This Elton-John-inspired song was recently featured on Pitchfork’s top 500 songs of the decade, and it’s easy to hear why. Sooo good.

8. Gloria by Patti Smith
What needs to be said about this Van Morrison cover by Patti Smith? It speaks loudly and clearly enough for itself, and the message is that it kicks ass and anyone named Gloria is totally lucky.

9. Oh Yoko! by John Lennon
Sigh. Isn’t this song romantic? I know there are a lot of Ono haters out there, but I think they should just listen to this track a few times and get over it.

What name songs would you include in an “I Call Your Name” mix?

i'd include "jenny" by sleater-kinney and "elvira" by the oak ridge boys. haha. seriously.

And I love Yoko Ono - Can't wait to read the interview in the next issue!

Additions:
"Rosanna" - Toto ("In Your Eyes" is also about her!)
"867-5309/Jenny" by Tommy Tutone
"Come on Eileen" by Dexy's Midnight Runners
"Suzanne" and "So Long, Marianne" by Leonard Cohen

And though we don't know her actual name, "Jessie's Girl," by Rick Springfield.

Now I'm going to be thinking about this all day! :)

"Layla" by Derek and the Dominos - written by Eric Clapton about George Harrison's wife.

"My Sharona" by The Knack.

I would also add Gloria - Laura Branigan (from the Flashdance soundtrack). Love it!

Everyone is coming up with such good song ideas; I'll have to do another round of these the next time I get to make a BitchTape!

I also kind of wanted to include "Shilo" by Neil Diamond and "Donna" by Richie Valens. Both cheesy, but also good.

and the two i share my name with (albeit, spelt differently)

Does Kelly Watch The Stars by Air count?

Clearly, I have a disease b/c I can't stop doing this. They're more than just the name but still pretty hot songs:

But these are just the ladies:
Debra by Beck
Nikita by Elton
Eulalia, Eulalia by Braid
Carrie by Europe
Gia by Fabulous Disaster
Stephanie by Buckingham Nicks
Jenny by Falco
Venus by Television
Roxanne by The Police
Emma by Emmanuel Jal
Rhiannon by Fleetwood Mac
Ivanka by Imperial Teen
Caroline by Jawbreaker
Polly by Nirvana
Suzanne by Leonard Cohen
Alice by Moby
Maria by RATM (also a song of the same title by Green Day and Ricky Martin, not to be confused by Maria Maria by Santana)
Irma by Magnetic Fields
Veloria by The Pixies
Monica by Tortoise
FOUR by Slint! Carol, Charlotte, Rhoda, Darlene. Five if you count the song Pat.

...and A Boy Named Sue by Johnny Cash b/c I think I'm funny, though I'm a little too emo w/ this list for my own good here. My hard rock lovin' partner helped :) You should seriously do this every day. This made my night!

Lola- by the Kinks. Works on so many levels. 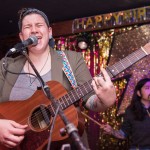