If you've spent any time in a Filipino household, you're probably all too familiar with karaoke—and not the awesome kind, like Riot Grrrl Karaoke, which happened in Portland last week, I mean the Magic Mic (no, not Magic Mike). Maybe you embraced it, but if you're at all like me, you loathed it, you covered your face in shame every time someone tried to make you sing. Though, on occasion, you would give in if enough of your Titas requested that you sing “My Heart Will Go On” by Celine Dion, especially if it was a holiday, your relatives were drunk, and if there was a promise of pocketing a few bucks if you just sucked it up and sang. Plus, you were eight years old and maybe you secretly kind of liked all of the attention when you effortlessly achieved a nearly perfect score. Yes, this special special gem of a karaoke system rates your performance from 0-100.

Years later, you simply refused to sing every time you were asked because you were an embarrassed tween rebel, and rebels don't sing for their family. God forbid. You'd make up excuses like “I have a sore throat,” or “I'm congested and can't hold my notes for long enough,” or you'd hide out during family parties and waltz back in to the living room as your Lola and Lolo were finishing up yet another rendition of Diana Ross and Lionel Richie's “Endless Love,” while your Titas and Titos watch, glazed, or maybe already knocked out on the couch. Then you'd go home, and manage to avoid karaoke for the next seven years. But all of a sudden, you find friends who are entranced by the idea of karaoke, and they drag you to a Korean karaoke bar, where you end up paying way too much for an hour of “fun,” and you can't help but think you could have done this for free had you listened to Lola and packed your still-boxed Magic Mic when you left for college. So, you decide that next time your friends try to convince you that $50 per hour is a good deal, you'll talk some sense into them. Maybe it's time to reclaim karaoke, stop singing along to Paul Anka, and find some new hits. Or maybe just start a Rihanna cover band. Karaoke is cool again, and your grandparents will vouch for that and say it never wasn't cool.

So, for your listening pleasure and newfound or renewed appreciation for the art of karaoke, here are some sexy songs (and some previously unsexy songs) covered by badass musicians who I totally love. Add these songs to your karaoke repertoire and you'll totally be the star of the party.

3. “I'm So Excited” covered by Le Tigre (original by The Pointer Sisters)
Are you excited yet?

4. “Girls Just Wanna Have Fun” covered by Starfucker (original by Cyndi Lauper)
I was caught between this and Starfucker's cover of Madonna's Burnin' Up. I'm still not sure if I made the right decision. You tell me.

6. “A Good Man Is Hard To Find” covered by DM Stith (original by Sufjan Stevens)
Sufjan Stevens said that DM Stith's voice sounds like unicorns, and I agree. His rendition of this Seven Swans track is absolutely gorgeous.

7. “Hot Like Fire” covered by The XX (original by Aaliyah)
Ohhhhhh yeah, things just got hot in here. Rest In Peace, Aaliyah.

8. “Don't Stop The Music” covered by The Bird and the Bee (original by Rihanna)
I'm telling you, a Rihanna cover band would probably go really far. Who doesn't like Rihanna? Look, Tegan and Sara are doing it too!

10. “I Melt With You” covered by Nouvelle Vague (original by Modern English)
I feel like I should be eating chocolate and rolling in the grass or something. Did they ever use this version in a Hershey's commercial?

11. “Jimmy” covered by of Montreal (original by M.I.A.)
of Montreal has covered nearly 100 songs (maybe even more by now), so they're clearly pros at this. They can even take songs I'm totally apathetic about and make me love them.

12. “Lovefool” covered by The Morning Benders (original by The Cardigans)
I have memories of singing this while walking to preschool, in the mall, in the bathroom, in the car, and basically everywhere where it wasn't inappropriate to sing loudly. It was basically my favorite, only second to “Ready or Not” by the Fugees. 1996 was a good year for music. Also, this cover is adorable and makes me so nostalgic.

13. “Dancing in the Dark” covered by Tegan and Sara (original by Bruce Springsteen)
I'm from New Jersey, and Tegan and Sara were my first loves. So, pairing them with The Boss is basically a dream come true.

14. “Heartbeats” covered by Jose Gonzalez (original by The Knife)
It's. Just. So. Beautiful. Oh god, are you crying yet? I can't stop.

15. “Can't Take My Eyes Off Of You” covered by Lauryn Hill (original by Frankie Valli)
Not gonna lie, I thought Lauryn Hill's version was the original for a large portion of my life.

Well, I hope that because of this mix you're brainstorming names for your Rihanna cover band you've decided to give karaoke another chance. Your Lola and Lolo will be proud.

Previously: This Too Shall Pass, Blood, Sweat, and Queers

Relevant: BitchTapes: There Goes the Neighborhood 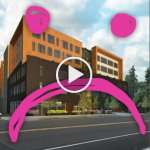 by Emily Nokes
Songs from Seattle musicians calling out gentrification in their neighborhoods, curated by Emily Nokes of Tacocat.