BitchTapes: Poppin' Around the World

Despite what the magazines and elitists say each year, pop music never seems to die… and I, for one, couldn't be happier about it. Today, take a break from Gagas and Perrys and explore jams by cool ladies outside the U.S.! Don't forget to share your other favorites in the comments.

Before starring in such quality films as Boy Eats Girl—it's a zombie flick! —Mumba lent her distinctive alto to exactly one album. Our loss!

“Burnin' hot,” indeed. Young gets extra brownie points for being the only person I've ever seen make housework look fun.

3. “Revolution” by The Veronicas (Australia)

If I ever made a playlist called “Songs by Which to Feel Pumped and Optimistic about Changing the World,” the Origliasso twins would feature heavily.

Sure, I like those stories about her puppety brother, but this is my favorite track of Ms. Allen's. It's just so smart. Please change your mind about retiring, Lily!

You wouldn't see this (NSFW!) video on U.S. TV. Don't mention t.A.T.u. Don't. do. it. This all-lady group is out, proud, and in control. Plus, the singer and drummer might be the world's most adorable spouses.

Yes, Elektra-with-one-L and Ellektra-with-two-Ls are totally different artists, but they're both awesome. This is currently my favorite song by which to do nerve-wracking job applications. If I fail/What the hell, at least I tried!

I first met Fefe in this post by Annalee Schafranek; we've been happy ever since. Appropriately, this song celebrates trying new things: styles, relationships… why be afraid to “make some new mistakes”?

Depending on my mood, my reaction to this number by Daniel Jones' friends can run the gamut from eye-rolling to tears.

I'd played this track countless times before I realized that the first words of the chorus are “I'll bring the toys.” Whoa. Aqua's former lead has sure grown up!

Long before Piper starred on Secret Diary of a Call Girl, she was my junior high idol, a record-breaking teenage chanteuse. I once excitedly referred to Doctor Who as “Billie Piper's new show.” Yep. Never made that mistake again.

Alexandra just might be the campiest singer alive, and I personally can't get enough of her. (As a side note, I can only assume that “Lene” is a fairly popular Norwegian name.)

12. “Underneath Your Clothes” by Shakira (Colombia)

There's quite a competition on this list for the label of “liveliest track,” but this slow jam almost certainly wins at “prettiest.”

Given their warm reception on “Ladydance,” I thought I'd treat Bitch listeners to the song that sparked my long love affair with LL&M1.

Probably best known in the States for the theme to Crouching Tiger, Hidden Dragon, Lee has been hard at musical work for nearly twenty years.

What can I say? I just love her, and between this song and Anne Hathaway's rap, I can't help hoping anti-paparazzi tunes are becoming a trend.

Shakira is awesome, I love her Spanish jams as well.

Anything from Ellie Goulding and Jessie J (both from the UK). And Kate Nash is also a great artist, plus she is a feminist!

Billie Piper's new show?!?! Oh, Deb. In other news, this looks fantastic. Thanks for putting it together; I shall enjoy listening very much.

How can you forget pop star Robyn from Sweden?
And I guess Björk's been around long enough that she's too obvious a choice (love that woman!)

Hey all, so I'm not much of a music connoisseur, but my daughter is hitting the age that she's actually hearing the words of the songs we're listening to and singing along (she's 4).
I want to be filling her head with girl-positive lyrics, not just good beats. Any specific recommendations? 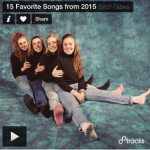 by Sarah Mirk
A mixtape of excellent new music from female-fronted bands. Did you hear all these?