BitchTapes: Slowin' it Down | Bitch Media

Lots of songs are slow, but to recall the awkward, needlessly dramatic tradition of the junior or senior high school “slow dance,” tunes need to have several additional qualities for me:

Enjoy, and share your favorite slow jams (even if you have different criteria) below!

The ultimate cheesy slow song. It's almost a parody of itself.

Shirley Manson could read Goodnight Moon and her voice would still make me Feel Things.

3. “Under You” by Better than Ezra

I considered BTE's “Live Again,” but “I love it when we fight/It makes me think at least you still care” is way too effing sad. I prefer “Under You”'s imagery of eating Ramen with a loved one in the middle of the night.

4. “Every Time” by Janet Jackson

The words' simplicity makes them seem all the more vulnerable, somehow.

5. “Somewhere Out There” by Our Lady Peace

“I miss your purple hair!”

6. “My First Night with You” [Ric Wake Version] by Mya

What would this list be if I didn't include my own favorite jam at age thirteen?

From a musical snobbery standpoint, I suspect this number might be “better” than the rest; Sacha's musicianship and lyrics are pretty much tops. Fortunately, I'm not much of an elitist, so I can also enjoy:

Aren't teenagers so reckless and hormone-driven? Eh, no, not always, but this is a lovely song, if you ask me.

9. “My Immortal” by Evanescence

Bonus points for inspiring the title of the most infamous fanfiction ever written.

What can I say? Garland's “t.A.T.u. and Synthetic Queerness” post started my umpteenth Spice kick (or that's my excuse). This version, off the Greatest Hits, changes “Boys and girls feel good together” to “Love will bring us back together.” Aww!

Would my schools have played a suggestive song by an openly gay man? Maybe not, but that's part of why my music is better than theirs. (Just kidding.) (No, I'm not.) 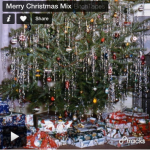 Here's a mixtape of excellent Christmasy songs to put on heavy rotation.