BitchTapes: The Not Even Screwin' Around Edition | Bitch Media

BitchTapes: The Not Even Screwin' Around Edition

This edition of BitchTapes is dedicated to confidence, audacity and chutzpah. We can always use a little inspiration to hold our heads high. These tracks never fail to keep me faithful that I can conquer anything. So do what you’ve gotta do, because you can.

CSS, “Believe Achieve”- Brazilian electro-pop group CSS are full of sass and I like it. Their latest album, “Donkey” features this danceable little number whose message for success is simple and timeless: it’s mind over matter.


Delta 5, “Mind Your Own Business”- You know those people that ask 35 questions, need to know every move you make or somehow interject themselves into every conversation you’re having? Delta 5, a British new wave group from the ’80s, wrote an homage to the nosy with “Mind Your Own Buisness”. Just try getting it out of your head after the first listen.


Sharkey featuring Jean Grae, “Summer In the City (Lovin’ It)”- Jean Grae is one of the most prolific and poetic rappers around. In 2004 she teamed up with Washington DC based musician and producer Sharkey for his collaborative album “Sharkey’s Machine”, featuring Grae and other hip-hop biggies like The Pharcyde and Cherrywine. I always take Jean Grae seriously, because she’s smart, she’s a brilliant lyricist and her stage name is a reference to X-Men character Jean Grey. Don’t mess.


Jim Croce, “You Don’t Mess Around With Jim”- I have a deep-seeded love for all things Jim Croce, especially this song. While it’s about a badass dude, I still feel stronger and ready for the fight (the theoretical one, not the physical one) when I listen to this song. I pretend I’m Jim and no one wants to mess with my prowess. Croce was one of the best love songwriters of his generation but he also had a way with words when it came to epic tales of epic folks. This is one of his best.


The Trucks, “Shattered”- The Trucks were a four-lady group from Bellingham, WA who I had the pleasure of meeting and interviewing last summer for my hometown’s indy music festival, TotalFest. While they never came right out and claimed to be feminist, their lyrics speak to issues like female masturbation, dudes telling us what we need and women’s safety. The repeated line “no I won’t sit nice and be quiet” in “Shattered” is an amazing call to every woman to not stay silent. I’ve never exactly had a problem with that, but this song undoubtedly makes me say what I say a little louder.


Sleater-Kinney, “Step Aside”- After 9/11, dissent was synonymous with treason, big brother was looming ever closer and hope was not necessarily sweeping the nation. In 2002, Sleater-Kinney released “One Beat”, their most political album, which addressed the paranoia, racism and fear that did sweep the nation. In particular, “Step Aside” reminded us to retain our faith, our voice and our ability to create change. The lyrics say, “These times are troubled, these times are rough, there’s more to come but you can’t give up”. Keep on keepin’ on.


The Lights, “Feets Don’t Fail Me Now”- You have to act to get what you want. Seattle’s The Lights know this. So do it. We all have self-doubt, but we can accomplish anything we put our minds to. Oprah moment over.


The Gossip, “Listen Up (The Punks Jump Up Remix)”- One of the most anticipated albums of 2009, for me, is The Gossip’s “Music For Men”, set to release June 22. In the meantime I can satisfy my jones for Beth Ditto with this remix of “Listen Up”, the anti-douchebag anthem from their last album “Standing In The Way of Control”. Beth doesn’t take any b.s. In a word: ditto.

I love BitchTapes. It is one the highlights of my weekend. Great choices this time!! Sleater-Kinney, The Gossip ... oh beautiful!

I knew your mixtape would rock. Say, do you have any fancypants DJ-ing gigs coming up? Perhaps in the Montana region? 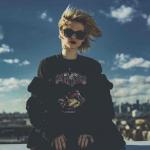 Rena says she used to make "sad girl" music. Then she turned to rock and roll.