BitchTapes: Who's Hungry? (Parts I and II) | Bitch Media

BitchTapes: Who's Hungry? (Parts I and II)

Happy Thanksgiving Leftovers Day! If you, like me, spent the morning deciding between pie and mashed potatoes for breakfast, you might need some songs about food to provide a soundtrack to your meals. Here are two past BitchTapes, republished with your gustatory needs in mind. Betcha can't eat listen to just one! Who's Hungry? Part I

1. Ham N Eggs by Tribe Called Quest Breakfast: The most important meal of the day. Start yours off right by taking Tribe Called Quest's healthful advice: Don't eat no ham n eggs—eat veggie sausage instead because it has less cholesterol! This song is not only awesome, it also reminds us that healthy food can be damned tasty. 2. Peach, Plum, Pear by Joanna Newsom It only makes sense to follow that healthy breakfast up with some fruit, right? Especially when the fruit comes with a complementary harp performance. 3. Girls Just Wanna Have Lunch by Weird Al Yankovic Time for lunch! Weird Al has the right idea here when he advises dudes who want a date to offer the lady some food. No salad-picking nervous eaters here! We ladies want to chow down at lunch time. 4. Cheeseburger by Gang of Four It was a toss up here between this song and Cheeseburger in Paradise by Jimmy Buffett, but I went for the darker tune. This song is not only about hunting for bargains on cheeseburgers, it's also about a lonely life on the open road. 5. Vegetables by The Beach Boys This song is so weird and great. Who better to sing an enthusiastic ode to vegetables than the harmonizing Beach Boys? (The veggies will make a nice accompaniment to the cheeseburger we ate earlier with Gang of Four.) 6. Some Chocolates by The Blow Who says you can't have dessert after lunch? (We'll be eating more after dinner, obvs.) Of course, these chocolates are made of crushtastic dreams instead of cocoa butter, but that probably just makes them extra tasty. 7. What's For Dinner? by King Khan & BBQ Dinner time! King Khan & BBQ Show have some excellent songs about food, but this one is my favorite. It always makes me so hungry! 8. Know Your Chicken by Cibo Matto Yes, chicken can make for a delicious dinner, but when your lover cooks your beloved pet (as is the case in this song, and in that one Strangers with Candy episode) things get a little more complicated. That's what happens when you know your chicken. 9. Beans and Cornbread by Louis Jordan Who doesn't love a song that personifies food, makes said food get into a fight, and then comes back around to being about how well the food goes together? The beans and cornbread in this song will make a great side dish for our chicken. 10. Momma's Gonna Make Us A Cake by Casual Dots There are more songs about dessert than any other meal, so I had a lot of cake/pie/cookie songs to sift through before selecting this one. I like the way the excitement builds, and the fact that everyone gets a slice of cake. Dessert is for sharing! 11. Ice Cream Song by The Dynamics You didn't think we were going to eat that cake without some soul-filled ice cream, did you? 12. Everything I Eat Starts With A P by Lee Shot Williams Lee Shot Williams doesn't mind a snack in the bedroom, but only if it starts with a p. While he claims to be talking about everything from pancakes to potatoes, methinks he might have a different p-starting bedroom snack in mind. Oral sex: the final course on our mixtape menu. Who's Hungry? Part I, by Kelsey Wallace, originally appeared on the Bitch blog in April of 2010. Who's Hungry? Part II

1. The Raincoats: “Fairytale in the Supermarket” Before you eat, you have to go buy the food somewhere. A surprising number of songs mention markets (The Clash's “Lost in the Supermarket” and Broken Social Scene's “Marketfresh” were runners-up) but the Raincoats are so awesome I had to choose this one. Even though it's not really about the supermarket at all. 2. Sarah Vaughn: “Black Coffee” This song sounds a little more like how I feel before I have my coffee in the morning. “I'm hanging out on Monday/My Sunday dreams to dry.” Yuck, what a terrible case of the Mondays Sarah Vaughn has. What could help her remedy these blues? 3. Yo La Tengo: “Sugarcube” I know!! Sugar!!!! 4. The Flaming Lips: “She Don't Use Jelly” Ideally, with coffee comes breakfast. And if you're the Flaming Lips, that breakfast is a really weird meal involving Vaseline on toast. 5. Asobi Seksu: “Strawberries” Need to wash the Vaseline taste out of your mouth? Have some strawberries and shoegaze. 6. The Moldy Peaches: “These Burgers” Lunchtime! In keeping with the Moldy Peaches' penchant for super-quirk, these are no ordinary burgers we're having for lunch. “These burgers/Are craaaazy!” 7. Young Marble Giants: “Eating Noddemix” Noddemix is the Swedish term for “mixed nuts,” and this is a song about apathy, much like that midafternoon slump you get that means it's time to reach for a protein-rich snack. 8. The Evens: “Dinner with the President” This is no ordinary dinner. The Evens believe that the gastronomical is political, so be prepared for a pretty intense meal. 9. Kaki King: “Yellowcake” So begins dessert. This is another song with food in the title that doesn't actually have much to do with food. Although I will say that the mixture of bliss and melancholy in this song is pretty much exactly how I feel after I eat a bunch of cake. 10. Cibo Matto: “White Pepper Ice Cream” What's cake without ice cream? Cibo Matto has about a million songs about food, but I like this one for its mellow beat and because I like to imagine what white pepper ice cream might taste like. According to Cibo Matto, it'd be “Like a line drawing…In my mouth/It stings my lips/It's like eclipse.” Okay then! 11. Aimee Mann: “Red Vines” Red Vines don't seem to give Aimee Mann quite the joy they give me, but I suppose high fructose corn syrup isn't for everyone. 12. Beat Happening: “Fortune Cookie Prize” One of my favorite songs ever. A little bit sweet and a little bit cryptic, much like a fortune cookie! Who's Hungry? Part II, by Lindsay Baltus, originally appeared on the Bitch blog in November of 2010. Any songs about food you'd like to add to our leftovers feast? Leave 'em in the comments section! Bon appétit! 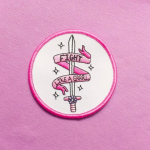 by Jessica Daugherty
Feeling lost, lazy, or hard to love?