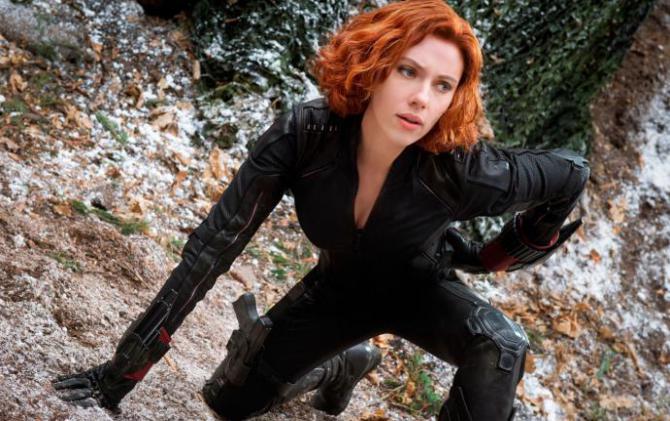 On May 1, Marvel released The Avengers: Age of Ultron, the long-awaited sequel to 2012’s The Avengers, both of which were written and directed by Joss Whedon. Despite earning generally positive reviews and making Marvel Studios $312 million domestically as of last weekend, it’s spawned backlash for, among other things, its depiction of Scarlett Johansson’s Black Widow character. Last fall, I expressed my disappointment over Marvel Studios continuing to prioritize the stories of straight white men into 2019, so I couldn’t help watching Age of Ultron with a smidge of concern. While I enjoyed some aspects of the film (Wanda! Vision!), the bad stuff was bad. Really, really bad. And we need to talk about it.

First off, if you don’t browse entertainment blogs like I do on a regular basis, you may not be aware of Age of Ultron’s disastrous publicity tour. During one interview, Chris Evans and Jeremy Renner called Black Widow a “slut” and “whore.” In a separate interview, Renner and Mark Ruffalo gleefully chanted “gypsy” after being informed of its derogatory nature. Not to be outdone by his co-stars, Robert Downey Jr. made patronizing, borderline racist comments about Mexican director Alejandro González Iñárritu. The days leading up to the film’s U.S. release became a sad game of who “The Offenders” would offend next. And now the movie’s plot—the Avengers reunite to save humanity from Ultron, an A.I. program gone rogue—has taken a backseat to its cheap, disgraceful treatment of a beloved female character.

So what is it about Black Widow that has fans up in arms? Well, Black Widow, otherwise known as Natasha Romanoff, has appeared in Iron Man 2, The Avengers, and Captain America: Winter Soldier, striking an enjoyable balance between no-nonsense superspy and loyal almost-friend. But in Age of Ultron, she’s been turned into the Hulk Whisperer, a beauty who tames Dr. Bruce Banner’s violent green behemoth with a “lullaby” (yes, really) and eventually falls in love with him. Midway into the film, Romanoff suggests she and Banner run away together, only for Banner to refuse because he believes himself too monstrous to be loved (so maybe Saturday Night Live’s send-up of Black Widow and Marvel’s understanding of female audiences isn’t too far from the truth).

Then, in a truly terrible moment, Romanoff reveals she’d been forcibly sterilized during her training as a potential assassin. “You’re not the only monster on the team,” she tells Banner.

At this point my brain shouted “Are you fucking kidding me?” Although Romanoff also expressed regret over the atrocities she committed as an assassin/spy, it isn’t a huge leap to assume she believes herself to be a monster because she can’t conceive which, if you read this site regularly, I don’t think I need to tell you why that’s a problem. Furthermore, it seems Whedon’s method of ‘humanizing’ a stoic female character is to give her a) a love interest and b) the inability to bear children. Can’t we be past this already? It’s bad enough Marvel still has no concrete plans for a solo Black Widow movie, now Whedon has fallen back on the creepiest of tropes: before a woman can be a hero, she must be bodily violated. With proper care and attention, this could’ve been a powerful background story for Black Widow. Instead, it’s nothing more than a plot device.

This is not to say Black Widow acts passively throughout the movie—she tears through Seoul on a motorcycle in a sweet action sequence (infuriatingly enough, the official movie toy features Captain America instead). But she also spends an inordinate amount of time held captive or carried around by her male colleagues. When Black Widow fans lobbed these criticisms and more at writer/director Joss Whedon, he deleted his Twitter account soon after. Though he states feminist criticism has nothing to do with his departure, it’s bad timing that does little to curb this upsetting portrayal of the Marvel’s top female superhero. That should be Black Widow on the the motorcycle, dang it!

One thing the film did right, at least, is highlight the consequences of war by showing that even the Avengers have blood on their hands. In a recent podcast, Whedon referred to Age of Ultron as a war film, which is bizarre given the distressingly precious dialogue in scenes with massive collateral damage and civilian casualties. But the backstory of Wanda and Pietro Maximoff (AKA Scarlet Witch and Quicksilver) is a heartbreaker: their original plan is to kill Tony Stark/Iron Man, whose Stark Industries bombs were responsible for the deaths of their parents. Stark has been the MCU’s loveable jackass since 2008’s Iron Man, and while I too have been swept away by his charisma, let’s say it out loud: Tony Stark, billionaire philanthropist superhero, profits off the deaths of innocents. It’s an interesting choice to have the film state Stark’s profiteering so overtly, and that storyline made the film more emotionally powerful. So let’s keep that in mind next time he sasses Captain America.

Marvel fans who want more of the Avengers must wait until May 2016 for Captain America: Civil War, which boasts a cast so huge that I’m expecting a call saying I’ll appear in the film any day now . Will I watch it? Probably. But after Age of Ultron, I wish I could be more excited for it.

Ariana Vives is the former new media intern at Bitch. She will be graduating from Portland State University in June and has been trying not to freak out too much.

Also something to note is that Black Widow doesn't appear on the packaging of the toy either but all of the main male superheroes do.

What's problematic is suggesting that forcible sterilization wouldn't create any dark, complicated, unresolved responses for a survivor, especially one in her prime childbearing years. Is it that hard to acknowledge that a woman might value her reproductive capacity enough to feel devastated by its loss? And Black Widow has always hinted at an uneasy detente with the unhealed traumas of her past. How strange is it, really, that she would relate to the only other Avenger who became a lethal weapon against his will? And would you have Black Widow loveless when every other member of the team has or had a romantic backstory?