ScreenTVprisonOrange is the new Black

Books Behind BarsThe Literary World of “Orange Is the New Black” 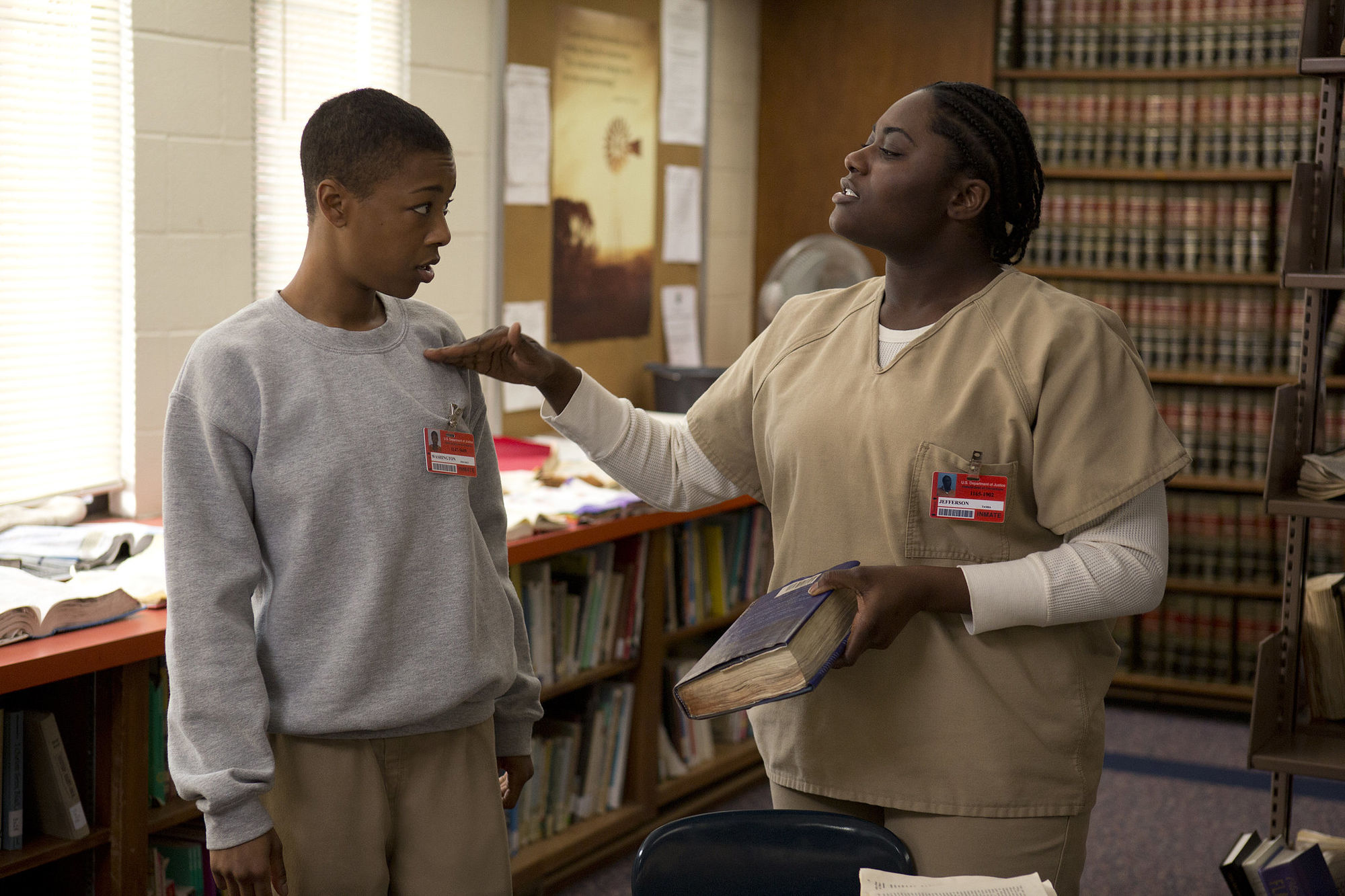 “Orange is the New Black” (OITNB) premiered on Netflix on July 13 and I, like many others, settled down with a family-size bag of Sun Chips to unapologetically binge-watch the entire season that very same Saturday. It struck me how many people on the show are seen doing something that’s unusual for television: reading books. Jenji Kohan, the creator of Weeds, adapted OITNB for the very small screen from the real-life memoirs of Piper Kerman via her book Orange is the New Black: My Year in a Women’s Prison. Kerman, a self-described nice blonde lady with a Seven Sisters degree (Kerman graduated Smith in ’92), published her memoir in 2010 after serving 13 months in Danbury prison for smuggling drug money.

Kerman and her husband, Larry Smith, are both writers with strong literary backgrounds and one of Kerman’s goals while she was in prison was to read through her Amazon Wish List (which is still up if you want to check it out). Books were a huge part of Kerman’s experience in federal prison. In an interview with the Los Angeles Times Kerman said:

“They [books] were complete lifelines. They were the only legitimate forms of escape. I actually avoided the TV rooms because they’ll suck you into some weird places. There was no prison library in Danbury. We just had informal bookshelves, but it’s very interesting what books are popular. Serial romances and mysteries, Janet Evanovich, Sue Grafton.  There’s the whole genre of street fiction—Dutch, The Coldest Winter Ever. Ann Patchett is big.

In prisons in the United States, books and libraries are lifelines for inmates. The Prison Book Program blog is full of accounts from inmates describing how important books are to their lives and journalist Erwin James of The Guardian wrote a good reflection on his personal experience with literature in prison in response to reports claiming that prisoners in Guantánamo Bay are obsessed with Fifty Shades of Grey. According to the Department of Justice, “The link between academic failure and delinquency, violence, and crime is welded to reading failure.” Despite that public stance, actually getting books to inmates is complicated and difficult and prisons broadly censor what inmates are able to read.

In OITNB, the showrunners added a library to their prison and it certainly makes for some great, ridiculously quotable moments, many courtesy of Taystee (Danielle Brooks). But aside from the library itself, books are visible in a majority of scenes in the show. In fact, there are some fans dedicated to cataloguing the books hidden in the show through avenues like the Tumblr The Books of Orange is the New Black, which hails Piper Chapman (Taylor Schilling) as the new Rory Gilmore (which seems sacrilegious to me, but I digress). The books visible in the show range from YA books like Freshman Year & Other Unnatural Disasters by Meredith Zeitlin, which is being read by the formidable Red, to 50 Shades of Grey by E.L. James, to Gone Girl by Gillian Flynn, which Piper describes as “almost good.”

Part of what makes the inclusion of these literary Easter eggs so noteworthy is the variety of readers. In fact, there are few to none heavy readers on current popular television other than intentionally nerdy characters à la The Big Bang Theory. But on OITNB, there is no stereotypical “nerd” character with the glasses and the book squirreled away in the background. Instead, many characters are depicted reading a book, discussing a book, or referencing a book at different parts in the show. Daya (Dascha Polanco) is a manga fan, Piper recommends Nicholson Baker to Tricia (Madeline Brewer) as something sexy to read (cough), one of the security guards is reading Night Shift by Stephen King, and Lorna (Yael Stone) is a magazine queen.

There are cliques in prison, racial tensions, violence and straight-up fights, but at the end of it all, these books provide connections. 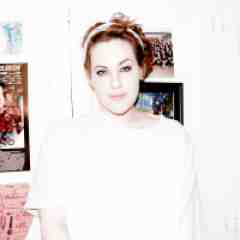 I was just thinking about the dearth of book-reading on television. But really, what else is there to do in prison?

I'm new to the show AND a book blogger, so I'm really looking forward to all of the literary references!

I have to admit, the comparison to Rory Gilmore seems sacrilegious to me as well. Having never been to prison, but having spent a week in jail, it kind of amazes me that people are so enamoured with this show because of the literary references and the relationship drama. The way that human beings are treated like animals is just glossed over. Yes, people in prison, and people who go to jail, like me, did something wrong, and deserve to be punished. I realize incarceration isn't supposed to be camp. If you go to prison, you deserve to live in a boring, tiny cell, with and uncomfortable bed and nothing to do. You don't deserve to see or talk to your loved ones whenever you want. You don't deserve entertainment, fancy meals, or fine cuisine. But people do not deserve to be beaten, raped, humiliated, drugged and starved, at the expense of taxpayers. When I first saw this show I had hoped that this would be the focus: that people would realize how fucked the system is and how prison not only does not rehabilitate people, but encourages recidivism so as to make the system more money. Instead the focus is on the neato lit references everyone remembers from liberal arts college and how everyone in the prison is either extremely intelligent, bipolar, or religious crazy. I have never understood a system that allows a Lord of the Flies approach to incarceration and I never will, but what scares me even more is how OK most people are with that, as long as they think people get to read more.

Did you watch the entire series or just a couple of episodes? The show DOES address how fucked up the system is. *Spoiler Alert* We see the situation where Tricia is receiving drugs from a prison guard; she finally gets clean, he basically force feeds her drugs, and she dies. Taystee gets out but then returns, talking about how she couldn't make it on the outside, that she didn't even have a place to stay. *End Spoiler* Many of the things you mention are, in fact, addressed in the show. Seems to me that the show, while it is problematic in some ways, isn't trying to convey that prison life is cushy; instead, it tries to show prisoners as people with their own stories who are just doing what they can to make it through the day/week/month/sentence. And the reading and relationships are a part of that.

to be fair, this is just one of the many blogs out there devoted to the show. Granted, a lot of them concentrate on the romantic drama and the jokes, there are also a variety of articles that deal with the actual issues that Piper Kerman brings up in both the book and show, many of which the other commenter has already mentioned. I personally have read up a lot more about prison reform in the past month since I watched this show and while my arm chair activism is not really helping anyone, it's something that I probably would not have paid much attention to before OITNB. and you really shouldn't discount the importance of prisoners having access to books, especially those that are in there for the long haul.

I see your point but I don't think it's fair that you're criticising the show on its merits of not concentrating on all the issues that you deem are the most important. There are SO MANY issues to cover that they're just skimming the surface with season 1, and it's also not a documentary. Like the creator said, Piper was just her trojan horse that she used to sell the network on the show, she hasn't even started in on the good stuff yet. 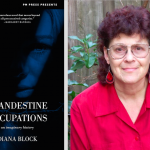 by Victoria Law
Diana Block went on the run after the government started monitoring her group that campaigned for Puerto Rican independence.