Bridal Party: In Support of Ceremony!

Sadly, readers, my too-brief stint here at Bitch has drawn to a close. With a topic like “weddings,” a person could probably write this series for the rest of her life.

You may have noticed that we didn’t really get into the question of marriage itself over the course of this series. I wasn’t sure this was the series for it, for a number of reasons. First and foremost is the fact that I’m still trying to parse how I feel politically and philosophically about marriage, from the very real fact of physical and legal safety it provides as a civil contract—a sort of “one stop shop” for domestic protections.

The same-sex marriage equality debate has framed marriage as a great equalizer, but in fact, marriage has never been that.

Western marriage has never served to provide equality across groups. It has, by the very fact of its existence, been used to codify inequality: gender inequality, class/economic inequality, racial inequality, and now sexual-orientation inequality. Text Reads: “Amount of Negro and Other Colored Blood Illegal in Various States for Marriage to Whites.” The images show the spectrum of “pass for white” marriage acceptability.

I can rail against this history all day long, but when the day concludes, there would still be same-sex couples living in fear of their person getting deported, dying in a hospital without them by their side, or not receiving death benefits (as is famously the case with Sally Ride’s partner of 27 years).

But even if everyone under the sun was “allowed” to marry, married couples would still be held as the preferable civil and economic paradigm over single people.

How can you concoct equality from inherent inequality? It disturbs me and I don’t quite know how to reconcile my feelings about it.

The other reason I didn’t get too much into marriage in this series is because the series has been about weddings, not marriage. They are two different beasts and you can totally have a wedding without the civil contract; same-sex couples have known this for ages! I think that weddings really are the starting point if we want to shift views of marriage to bring them more in line with this century. But I think if we want to do THAT, then we need to kick some of the wedding baggage to the curb. And that includes no longer listening to and repeating the cacophony of cultural messages that carry the markers of a history of inequality and antiquated gender essentialism.

Even the fact that dominant wedding advertising is filled with white women who appear to be of a certain socioeconomic class perpetuates the social elitism (always twinned with race) that is so historically an element of Western weddings.

Many of the same ads relentlessly stress subliminal and/or overt messages like these gems: you can never spend too much money on your wedding day, can never be beautiful enough, never go into too much credit card debt, never be too extravagant, can always lose a little more weight, and can always be a bit more like a princess.

It’s just the same old wealth/royalty proverbial carrot that convinces us to purchase happy memories rather than build them.

Princess Diana and Duchess Kate—who incidentally used a number of Queen Victoria’s wedding strategies—have effectively proved that many of us are STILL obsessed with the old rags-to-royalty wedding story (though Kate was hardly coming from rags); still emulate it; still want to be in the club.

What if we stopped seeing weddings as an opportunity to project undebateable perfection and financial supremacy? What if we instead stopped ignoring the subtle but significant difference between ceremonies and events?

What if we all took weddings as one of life’s rare opportunities for collective vulnerability (the benefits of which my not-husband has convinced me of time and time again)?

When it comes down to it, how many of us want to look back on a major life milestone, something we no doubt worked hard towards, and see a collection of elements that don’t reflect that work or our true selves at all?

Tradition—other people’s opinions and priorities—merely acts as a jumping-off or reference point, not a map. We can’t buy a prefab reflection of personal meaning and mutual vulnerability any more than anyone can purchase a personality.

Beyond that, we spend a lot of time in the handful of decades that we exist in this world being told things and telling things. But there are comparitively very few moments when we allow our pretenses to drop and we come together to share something honest, and complex, and for many of us a little (or a lot) scary. That’s a transformative thing.

And that’s always going to be deeply personal and unique.

This sort of willingness to be publicly vulnerable calls for a ceremony, not an event. It’s one of those moments in which we would be best served to let go a little, open up, and “let life rise up to meet you.”

Previously: You’ve Unlocked the Bouquet—Level Up!, Tale of a Tomboy Bride

i'm sad this is the last bridal party post. i vote bitch makes this a recurring thing.

Thank you SO MUCH for this re-framing of weddings as an possible opportunity for collective vulnerability.

I think sometimes an emphasis on having an "event" or a big party can happen when secular folks need to negotiate distancing their celebration from religious traditions, but without having a cultural framework for what a wedding ceremony can be without reflecting a religion you may not take part in (I mean, because many societal ideas about what a wedding is are influenced by large religions, even when god isn't mentioned). Often, while I was planning on my wedding, I would run into folks on bridal forums talking about how it's not just a party and the ceremony is the important part, but usually from a religious standpoint. I knew, too, that the ceremony meant a lot to me, but it was hard to explain or even know for sure what I wanted it to mean without a religious framework.

There's a whole lot of words that are used to describe the writing of secular ceremonies, such as making it 'personal', 'meaningful', 'special', etc. - that while they may be accurate, are pretty vague. I like the idea of vulnerability as a more universal thing that a wedding is an opportunity for.

Thanks for the series :)

This series was really incredible. Thank you so much for sharing all your insight and covering a breadth of wedding topics! 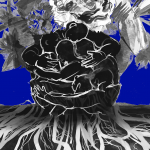