Bringing Up Baby: AskMen.com on Pregnancy and Sex | Bitch Media

Bringing Up Baby: AskMen.com on Pregnancy and Sex

AskMen.com, an online lifestyle magazine, enjoys a larger readership than Maxim, GQ, and Men’s Health, with 15 millions visitors each month. According the their website, AskMen’s readers are “confident, successful and interesting men,” and AskMen’s mission is to “help guys become Better Men.” Becoming a Better Man doesn’t have much to do with knowledge about pregnancy, apparently—even though AskMen.com is clearly meant for straight, cisgendered men interested in sex with straight, cisgendered women—because there are only five articles on the topic (notwithstanding news on celebrity pregnancies), two of which are exclusively about sex. Here they are:

1) Pregnant Love: How to sleep with a pregnant women
2) Pregnancy Body Changes: Think a little weight gain is all that’s in store for you? Think again
3) Postpone Her Pregnancy: How to convince your mate to delay having children
4) Sex After Pregnancy: Get her back in the sack.
5) Pregnancy: A Man’s Guide

AskMen.com’s coverage of contraceptive methods, in contrast, is prolific, but these articles don’t mention pregnancy. It seems that pregnancy itself is only interesting to AskMen.com insofar as it affects a woman’s appearance and libido. The article on “Pregnant Love” was particularly interesting, because it’s decidedly different from AskMen.com’s typical coverage of sex, which suffers from serious penis envy.

“Pregnant Love” was by far the most detailed—and most sensitive—article about sex that I have ever encountered at AskMen.com. From the article:


On the Edge of Missionary: Lie her on her back at the side or foot of the bed with her knees bent, and her feet perched at the edge of the mattress. You can either kneel or stand in front of her. This also should not be performed after the fourth month.

So why did the article about pregnant sex treat women as having more agency—and being more deserving of satisfaction—than typical AskMen.com articles about sex? I’m not sure, but I wonder if the “pregnant woman” is, in some subconscious way, held up as more respectable, less of a tease, and therefore more deserving of sexual satisfaction? This seems to fly in the face of conventional interpretations that men treat pregnant woman as de-sexualized creatures. But, perhaps this very de-sexualization allows for sexual attentiveness? I can’t emphasize enough the degree to which AskMen.com’s typical advice about sex is preoccupied with penises and premature ejaculation rather than clear, specific advice on how to please a woman (not to mention the heteronormativity that wrongly assumes men only want sex with women in the first place).

If magazine target audiences weren’t so gendered, there wouldn’t be such a huge information gap when it comes to sex. But then, what would the advertisers do!? After all, AskMen.com’s function is to corral men aged 18-45 into one online place so that Gillette knows where to place its ads. AskMen.com clearly doesn’t think that coverage of pregnancy appeals to the Gillete crowd, but they do think that sex appeals to the Gillette crowd—and the article on pregnant sex reveals that AskMen.com is able to drop penis-size obsession and focus on how to please a woman sexually. Perhaps if the respect accorded pregnant women were bequeathed to all women, more articles would focus on a woman’s pleasure rather than the man’s penis. It could be part of the ongoing quest to become a Better Man.

Not only that but we would ALL have better sex! :)

I think the change in approach with pregnant women is due to the assumption that the man is married to the pregnant one. Or at least she's not just a "slampiece." If you're sticking around enough to see her while she's preggers, then you must actually love her. I bet this is what they (the authors) are thinking; however, this is just conjecture.

Or maybe the articles are written by different people. Or *lots* of men are freaked out about body changes/hurting the baby. Or AskMen.com assumes that pregnant women are more likely to be partners than booty calls, which is probably true.

It is like all of a sudden you aren't talking about their hook-up but their wife/girlfriend with whom they have a life and family. If Askmen.com talked about them in a derogatory manner there might be pushback.

I appreciate that men are being informed on these topics. So many times women are faced with figuring out these things but men are just as responsible for knowing this information as women are! I didn't know much about what this magazines writes about but if these are the type of topics men are reading then I am all for it! 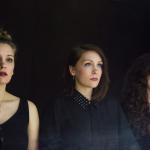