Bringing Up Baby: Pregnancy, Childbirth, and Infant Care in TVLand Hello, fellow Bitch readers! I’m a freelance journalist, editor, writer, and blogger, and I warmly welcome you to the first post of my guest blog series, Bringing Up Baby, which will explore pregnancy, childbirth, and infant care as represented on television (and, occasionally, in film and the mainstream media). My goal is to introduce babies as an important topic for feminists who are wary of representations of women and gender in the media.

These are important concerns, and their centrality to feminist criticism is also important. It was, after all, the equating of womanhood with motherhood and domesticity that feminists originally fought against. But today, motherhood needs feminist voices. Single motherhood (not any indicator of race) is the number one predictor of poverty in the U.S., and the U.S. is the only Western country that does not mandate parental leave for working parents. We’re also facing an ignored crisis in maternal healthcare. Rates of death and illness resulting from childbirth have been climbing since the late ’80s, and the U.S. ranks #33 out of 43 developed countries in maternal death rates.

But fear not! Come along with me for a jaunt in TVLand, where the news tells us that maternal mortality is only a problem in Africa, and sitcoms and dramas remind us that single mothers don’t exist—unless their progeny are attractive teenagers. With the notable exception of NBC’s new Up All Night (yes, I’ve watched it, and no, I didn’t like it), current in-depth portrayals of early parenthood on TV are portrayals of early fatherhood. Exhibit A: Modern Family with little Lily and her two dads, Cameron and Mitchell; Exhibit B: Dexter and little Harrison (his mommy was murdered by a serial killer); Exhibit C: Young single dad Jimmy and baby Hope (her mommy was a serial killer and subsequently executed) in Raising Hope.

There are a lot of babies in TVLand these days, and the popularity of single fatherhood is not new; let’s not forget Full House (how could we?). Early fatherhood of non-infants is popular as well, from Two and a Half Men (shudder) to Fox’s new animated series, Allen Gregory. So … where are the moms? Considering the fact that 80% of single-parent households are headed by mothers, the popularity of shows about single fathers seems strange. And while it’s important that homosexual dads are getting screen time, I can’t help but notice that these fathers seem to replicate, sans uterus, all the assumptions and prejudices of white, heteronormative American parenting. Again, I must ask … where are the moms? (Well, on Grey’s Anatomy. I’ll get to that later). According to the U.S. Census, one-third of lesbian households have children, as compared to only one-fifth of gay male households. But these lesbian households are hard to find in the media.

My blog posts will address the absence of single mothers except under sensationalistic circumstances (pregnant teens; Manhattantites in heels; polygamists: reality TV, my head spins!), and I’ll also address such persistent mysteries as: Why do female characters on crime or sci-fi dramas rarely become pregnant (unless by demon or alien spawn)? Why do middle-aged female characters so often think they’re menopausal, only to discover they’re actually pregnant (most recently on Parenthood)? Why does nobody in TVLand ever have an abortion (Grey’s Anatomy, I know) even though there’s a pregnancy at some point during most every teen drama? Why are childbirth scenes so formulaic? And what was up with that grotesque homicidal midwife witch lady on Game of Thrones?

I hope you’ll join me as I examine what pregnant women and new mothers are like on television, and speculate on how these representations might be hurting women in the real world. I should mention here that I have actual physical difficulty watching reality TV (symptoms: nausea, vertigo, lingering headache), so my knowledge in that area is sparse, and I welcome my readers to offer examples and counter-examples. Thanks for reading!

Very interesting topic - can't wait to read more! The show Reba did spring to mind reading this post. I'm curious what your thoughts are on that show...though, honestly, I'm not sure how long it lasted on air.

<p>I hadn't though of Reba! Thanks for bringing that to my attention. I didn't really watch the show, but I remember there was a teenaged daughter who had her baby and (I think?) married the father. It seemed like a really in-depth portrayal of motherhood.</p>

Thank you for starting this blog series! Its a subject that really doesn't get enough attention in Feminist circles. I can't wait to read the first installment!

Excellent topic!! This is something I've been interested in for a while. I'm looking forward to reading more. Great writing too!

Thank you in advance for writing this series! I look forward to reading more. Having a child has revealed to me all kinds of discrepancies between pregnancy/motherhood/child-rearing and the media. There is much to say on this topic. I don't have a television, although that does not keep me from seeing the mass of illusions presented by our media-culture on these topics. Let's question those assumptions! Shake up our perceptions! Call out the falsehoods that pervade our everyday ideas about what it means to have a child.

Looking forward to your posts. One thing I'd like to see you add to your analysis is the pop cultural obsession with celebrity pregnancy.

I'm really excited to read this series! This is one of the things that I focus on in grad school, along with maternal healthcare (what a hotmess). I think you've hit the nail on the head that this is virtually ignored in feminist media analysis and I'm super pumped!

Thanks Cheryl! I'm glad to hear you're focusing on maternal healthcare, which really is a hotmess (I have some other words for it too that I won't write here). There aren't many researchers in this area so I'm looking forward to your feedback. What kind of grad program are you in?

<p>I wracked my very middle aged brain to find examples of television moms in past generations - All I could come up with was "Bachelor Father", "Make Room For Daddy", "Bachelor Father", "The Courtship Of Eddie's Father" and "Family Affair" :(( (I hope I am not the only one who remembers these) Our living rooms have been filled with single dads for decades.</p>

Wow. That's really interesting. Unbelievable (the Dan Quayle quote). Thanks for the tip!

I can't wait to read this! Just one question, will you be adressing miscarriage, still borns, infertility, post partum depression, babies with special needs, breast feeding, and unpleasant problems that might arise during pregnancy? I feel that these are rarely portrayed well in the media and are a bit of taboo subjects.

I was planning to write about most of these topics --- you've given me something to think about Re: babies with special needs. Stay tuned :)

Though i have only seen a couple of episodes, and the show itself wasn't my cup of tea (and is this even the right spelling?), wasn't the mother in Gilmor Girls an adult who had raised her daughter as a single (teenage) mother? I ask because if that's right it must be one of very few examples, given that we rarely see more than the beginning of teenage motherhood...

Absolutely, that's a great example. There are a lot of single moms in TV history who have attractive teenage daughters when the series begins. That's one of the two main TV mom tropes, in my opinion, the other being pregnant teens. I hope to compare these tropes in an upcoming post!

I cant wait to read your next post, I'm very interested to see how this topic does.

Yeah! I am eagerly anticipating your blog. I would love to see some deconstruction of baby story et al. Not only is normal birth completely distorted but dr. So and so swoops in to "deliver" said baby. The combination of birthing woman strapped to a bed and deferring to her dr. Packs a real punch and undermines our collective confidence in normal birth with minimal interventions.

I am very late to the party but I am so, so excited to read this blog series (Im not sure if that is the proper term, but I like it).
Thanks so much for talking about it. I know that motherhood and feminism are not generally seen together and as a Feminist ready to become a mother I am so happy to see this post. Its absolutely a breath of fresh air. 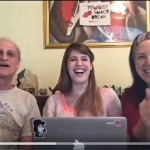