The new PSA from the Candie’s Foundation:

First things first: The message here (that teens should “pause” before they “play” – which I think means put a condom on before they bone) is a good one. Teens, if you’re reading this, please do think about the potential consequences prior to getting sexy (this goes for you adults, too). However, this message is obscured by at least two things.

1. Bristol Palin is basically saying that because she’s privileged, it’s fine for her to have an unplanned pregnancy. Poorer, unluckier folks? Not so much. Because she’s got a Young Republicans suit on and a swank apartment, we can support her decision to have a baby as a teenager (or at least feel OK about it). But those scary underprivileged teens better grab some condoms – stat! 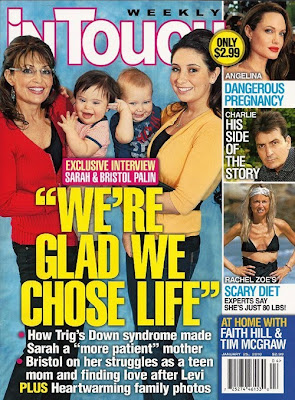 What do you think? Is the honesty depicted here (because hey, let’s face it: life is easier in many ways for privileged teens, pregnancy or no pregnancy) refreshing, or patronizing? Is Bristol Palin an effective spokesperson because of her firsthand experiences? Does she come across as a hypocrite after her whole “Choose Life!” campaign? Discuss.

This ad offers nothing but a childish scare tactic to quell young women from having sex because of the child that could potentially result from it. The ad does nothing innovative, really, this message has been around for quite a while. The ad suggests nothing to solve the bigger problem they seem to be dancing around, the reason why the ad was created in the first place aside from emphasizing how well-off Bristol Palin is, which is that young people will have sex for whatever reason before they're ready to have their own families and find themselves in a situation where the woman is pregnant. It does nothing to support or help young women who are already in this situation. It's also deliberately ignoring half of the equation. This ad is aimed strictly at women. Any young men watching this can breathe easier knowing that they won't have to deal with the consequences that the stigmatized woman will. If the only consequence is that the woman involved will have a child, it puts all the pressure on the woman to be the one to who has to "think before playing." Not using the word "sex" and spending half the time emphasizing how famous and well-off Bristol Palin is doesn't bring anything productive to the table. Young people shouldn't "play" if they're poor. Bristol Palin's family is well-off enough to support her and yours is not.

The overall message is vague, which is a pretty serious shortcoming for something like a PSA which is created to present a message in a succinct, informative, and effective way. Can Bristol Palin's son look back on these ads when he's older and know that his existence would have made his mother miserable if she hadn't been one of the few privileged people in this country? Children shouldn't be born into poor families because then they'll be unloved? "Poor" Bristol isn't holding the child, he's standing behind her, neglected, unloved, while Bristol stares into the camera like she has nothing left to live for. She's poor, she has a baby, she's alone, she's a woman, so the message is that her life is over. What about women watching this who are already in the situation Bristol is forewarning about, how are they supposed to feel as struggling young mothers? That they should just give up? It's a stab at the underprivileged and it encourages the idea that a young woman who's found herself unintentionally pregnant should be shunned. It's also an extremely unhealthy look at childbirth for society as a whole, which I think is what bothers me the most, that an unexpected child is only a negative thing which is extremely surprising coming from Bristol Palin given her emphasis on how she was able to gain so much good from her experience.

What's the PSA saying, exactly, I guess is what I'm wondering, aside from that (certain) people should "think before playing." What's it's purpose? To get across that poor, pregnant women will spend the rest of their life miserable because they'll never be rich mothers like Bristol Palin is? Bristol Palin wonders what her life would be like had her mother not been the governor of Alaska? Dim, dark apartments suck? Then again, like I said before, the only thing it offers is a scare tactic for young women, something to show in-between Lifetime Original Movies during abstinence only sex-ed classes, so it shortchanges itself.

This ad sends the message that "underprivileged" teen moms won't be able to make a decent life for themselves or their child. It completely dismisses the power of love. It seems to focus solely on finances, and dismisses the fact that a rich family may not be a happy, safe place to raise a child. Yes, being a teen parent may not be "ideal" by our society's standards, but it is unfair to assume that an upper class teen parent will provide a better life for a child than a middle or lower class parent. Of course, money does help with things like diapers and daycare, but it doesn't provide love and support. It requires a family, friends, or community to that. I'm flabbergasted by this ads blatant discrimination towards the lower classes, and the assumption that just because someone is young, they will be unfit parents. I know quite a few women who had children before they turned twenty, and they are some of the most amazing women I know. Their children are well loved and well cared for. No, not all of them are perfectly stable financially, but I think their kids have just as much fun (I think more!) painting egg-carton trains, then having lots of plastic/electronic toys bought for them. Lucky for these kids that their moms, dads, aunts, uncles, grandparents and family friends are spending lots of time loving and playing with them, and not off campaigning a discriminatory cause.

What if you didn't have access to adequate health care or birth control? What if you didn't have examples of success surrounding you your entire life? What if you lived in a culture where teen pregnancy was the norm? Or even one where it wasn't, but girls were supported by their families or parents/ Pause...Would this white-girl, conservative PSA really make you pause and not have sex or wear a condom? No. Because I doubt many teen girls really relate to her in any way or find her to be a credible spokesperson for abstinence/safe sex. This ad is patronizing and arrogant.

Shouldn't we be celebrating that she is acknowledging her privelege? Not knock her down for having it? We all know that people with less money/family support have a more difficult time having a baby.

Ok. This does give me all sort of icky feelings and my feminist bone starts to twitching, but when I stop and think about it...well it is sort of nice to see her acknowledging her privilege and pointing out that it's hard to raise a child alone. She's not wrong. I am certain these folks do not mean to advocate abortion, but with the way the mind works I can see a lot of girls also thinking abortion would be way better than the bleak scene at the end. My real beef? I could do without the scene where a modest home and outfit are cast in such a light. A modest white t-shit in a plain apartment isn't the end of the world. Saying "it isn't pretty" and making that sort of existence look as depressing as hell is actually more offensive to me than the no-sex-before-marriage message.

Kiki, I agree with you that it's refreshing to see Palin acknowledging her privilege, but I have to agree with Anon here that what bugs me about the PSA isn't so much that she is acknowledging her status (yes, it is easier for her to raise a child in many ways because of her wealth and support system), it's that a less privileged existence is framed as some kind of nightmare.

If the PSA had shown a frustrated Palin worrying about daycare or paying bills on time but still loving her baby as the alterna-lifestyle here, it wouldn't have irked me as much as seeing the scary, dark, charmless apartment with a baby in the corner. Hey Bristol, not being as privileged as you isn't all that bad! And also, it doesn't mean that wealthy teens should feel like they're off the hook when it comes to preventing pregnancy!

At any rate, the heart of the message (taking the consequences of sex seriously) is a good one, and I'm glad Palin is using her position in the spotlight to talk about it. I guess I just wish she'd gone about it differently.

Because this ad comes from Bristol Palin, daughter of the biggest advocate for "life" (though decisions made when she was in labor might suggest otherwise, for she waited to go to a hospital after her water broke through a 30 minute speech, drive to the airport, flight to Seattle, layover in Seattle, flight to Alaska, drive to hometown; when your water breaks you being leaking amniotic fluid, leading to possible SERIOUS HARM TO THE FETUS. Pretty much she could have been trying to sabotage the pregnancy.) I think it can only mean one thing: that sex is bad and boys and girls shouldn't do it. They should pause before they play. Now education about sex, that's also bad. And providing condoms and counseling, that's even worse. Basically, no sex, never, not until you're married. But if you do get pregnant, lord knows how because of course you weren't having sex, you should keep the baby. Life will suck, this ad is a preview of what you've got in store. I mean we could provide rights to women to allow them to make decisions about their own bodies. But really we shouldn't because a mostly rich, white male headed party really knows what's best for everyone. I mean, like Bristol points out, if their little girls make one little mistake (and of course it had to be only that one time, and they were tricked into it) they can get a nice shiny rich person cover for it and those girls can be role models and star in ad campaigns.

Now, I don't want to ruin what's written above by explaining it, but I have to. If your original language isn't English, you might have trouble with the way we do sarcasm and irony (and I'm not being xenophobic, when I took French our teacher explained to us that the way we do the inflection to change the meaning of a sentence doesn't exist in French. And I've had people tell me that sarcasm is not something that translates well), that was meant to be ironic. I'm an advocate for both the right to choose and the right to education, which so many teens are being denied because their parents are uncomfortable with the idea of them exploring their bodies.

Relevant: The Radical Idea of Providing Doulas for Abortions 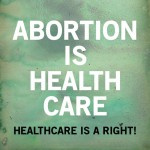 by Rebecca Koon
The Doula Project supports people who make the choice to end a pregnancy.