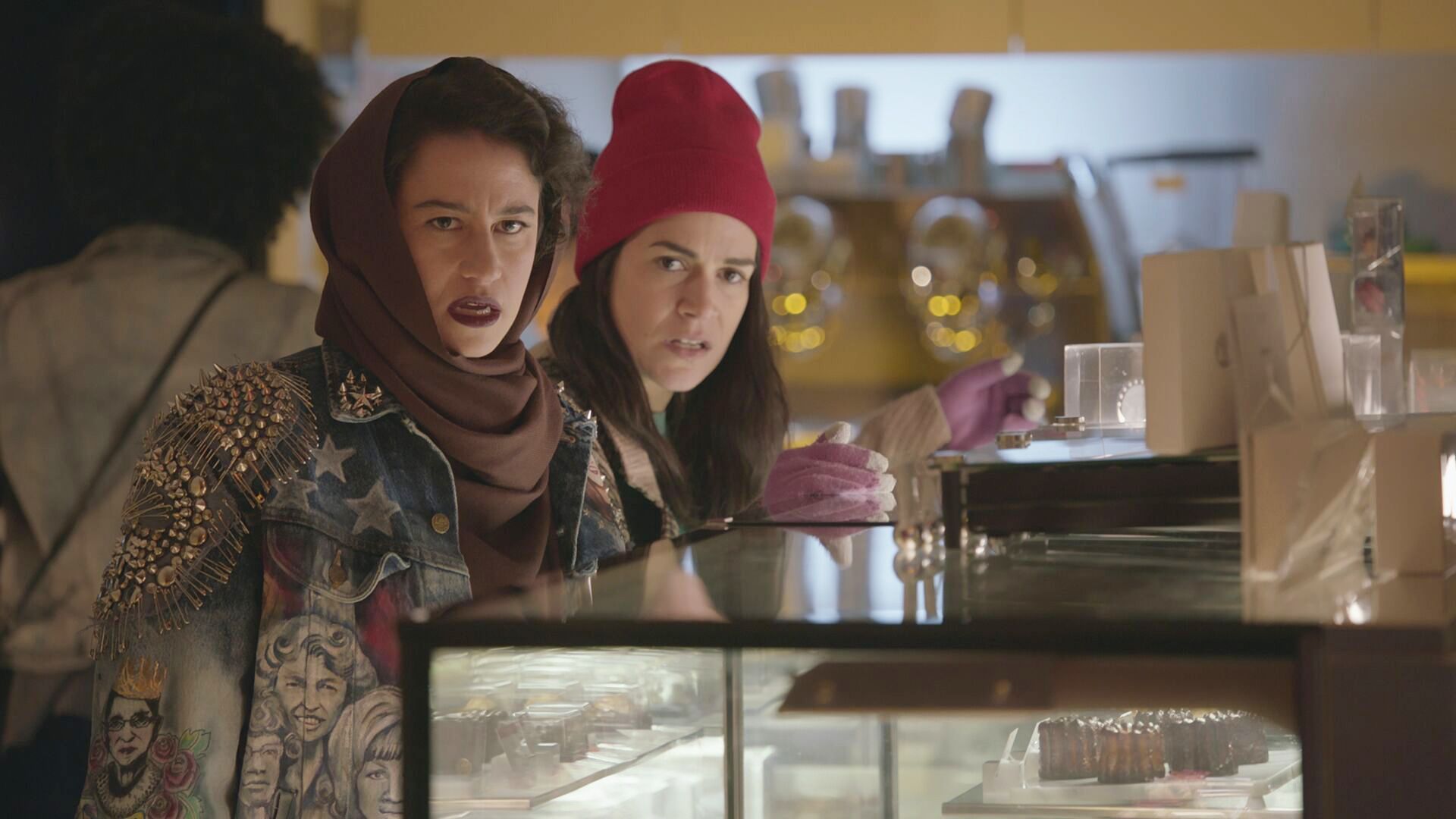 It’s official. The days of people thinking of Comedy Central as just a network for men are over. The smash hit Inside Amy Schumer is returning in April and there’s even more exciting news: Today Comedy Central announced that critical darling Broad City has been renewed for a second season. Television audiences’ appetite for bold, comedic female voices is strong. I’m beyond thrilled, not only because the show accurately portrays female friendships without the pun-a-thon tendencies of Sex & the City, but also because I know both Abbi Jacobson and Ilana Glazer are great comedians. We’ve done stand-up shows together and I was featured in both the web and TV versions of Broad City. I got a chance to sit down with them a few days ago to discuss all things Broad City.

Ilana Glazer: Thank you so much!

Abbi Jacobson: It was naughty, right?

Yes! Because I know you both pretty well, so the bathroom scene made me gasp. I yelled at my TV, “Oh, my God, Abbi’s doing coke!” [Laughter] OK, we’re about halfway through this first season. How do you feel your show has come together thus far?

Glazer: I’m surprised about how different if feels to watch it on TV as opposed to in the editing suite. I mean, we watched every frame over and over again, but it just feels crazy and also like a miracle when each episode finally airs. You know, you can always dream about it and envision it, but it’s not real until you’re shooting the actual show. Our minds are blown.

Jacobson: I’m so happy with how it’s going so far. Seeing how people are reacting to the order of the episodes has been really interesting. I mean, I can’t help but look on Twitter and see what people are saying about it. I’m just happy that everyone’s getting to know the characters and having fun with them. So every Wednesday, I’m really excited to watch and then see what people think.

What have been some of the craziest comments you two have gotten on Twitter?

Glazer: It’s definitely weird sometimes. I get how people think they know us based on the show—and I feel like they do because the show is so true to us—but it’s a little strange when someone’s unabashedly like, “I want Abbi to marry me and have my babies.” You know, our generation is very hyperbolic. Like everyone is obsessed with everything as opposed to just saying they simply love something. So it’s funny to have that hyperbole pointed at yourself. I have to say I’ve been really enjoying people mistaking me for a different race.

What races have you gotten?

Jacobson: I can’t remember anything super specific off the top of my head, but a lot of people will be like, “Ooh, I love this show with two women protagonists: one a WOC and the other a curvy white girl.” [Laughter] Oh, my God, this is Ilana’s dream come true. [Laughter]

Glazer: It’s also funny when people call out our bodies. After “Fattest Asses,” I was blushing after reading some of the comments. There were some really sensuous ones towards Abbi.

What’s been the most surprising thing you’ve learned during this whole Broad City experience?

Jacobson: So many things. Going through all the different processes: the writing, the pre-production, the production, the post. I feel like we went to college for TV. There were so many times where I said, “I didn’t know that’s how that worked.” Also, learning how to ask a question, have more confidence in your voice, yet at the same time be willing to collaborate. Learning how all the writers work together and making us a solid team.

Speaking of the writers, can you tell me a little bit about what the writers’ room was like?

Glazer: A typical day in the writers’ room is going through one of these steps: writing an outline and writing the script, and there were two rounds for each. So we’d come in and begin by talking about our day and if something funny happened on the subway, for example, we’d try and see if we could use it in the show. Then we just dive into the show. It’s pretty similar to what we did on the web series.

Jacobson: Also, once we got into the thick of writing the scripts, the day-to-day schedule changed a little bit because then we were writing more than one episode at a time. So we’d get notes from the network on one episode while we were breaking another one. It was cool, but it was a tighter schedule than I assumed it would be. But it was also awesome because we wrote this season in twelve weeks.

Glazer: Yeah, and looking back on it, we were like, “I wish we had more time.” But I think we were going to be able to write it in whatever timeframe Comedy Central gave us, so they really made us workout our deadline muscle.

I’ve been following Broad City since it was on the web, and even though the TV show is different from the web series, the two still feel related. So what was the biggest struggle of transitioning this project from the internet to TV?

Jacobson: I’m so glad you feel that way. In the beginning, it was a good challenge to go from the two-to-five-minute webisodes to 21-minute TV episodes. So we decided that each episode was a day in the life, which felt right and how the web series should evolve. And we blew everything up as opposed to just seeing a vignette.

Glazer: When we pitched it as a day in the life, locking down a twenty-four hour period really helped us figure out what each episode was going to feel like and it shaped our reality in terms of how crazy we can go and gave us some boundaries.

And those boundaries seem to be working for you as you’ve been getting glowing reviews from critics. One of the major things I agree with them is about how strong you two are as a duo. Can you name a strength that the other brings to this successful partnership?

Jacobson: I think Ilana, which is the same as her character in the show, is so willing to try anything and go full force and that brings balance to both me and my character because I tend to not do that. She takes risks and is ballsy.

Glazer: On screen, one of Abbi’s strengths is her sincerely good acting, which grounds the show and grounds the comedy. So if she’s going to be the straight woman and be so real and grounded, that makes me have to be equally grounded in my absurdity in order for it to all work. She raises the bar for everyone to act well. Behind the scenes, she’s a true visionary and I think part of that is due to her being a visual artist. She has the gumption to just storyboard an idea or she’ll figure out a way to actualize a big idea.

OK, with that in mind, let’s play a quick version of The Newlywed Game. I’m going to ask you a question and see if your answers match up. First one: Our biggest fight was…

Jacobson: Oh! I know what our biggest fight was. When we write together, Ilana usually—and she just looked at me right before I started talking and said the same thing as what I’m about to say—mans the computer because she’s better at the typing stuff. She had done it for so long and we got into this fight and I told her that I like it better when she does it—

Glazer: And I thought we were going to share the typing responsibilities and I just wanted a break.

Jacobson: But you didn’t even say that.

Glazer: Yeah. I choke up at confrontation, in general.

If the Broad City office caught on fire, the one thing she’d grab…

Jacobson: We share this spreadsheet since we had the web series, but since it’s online I guess the computers don’t matter anymore.

Glazer: OK, so next in line would be the snacks. [Laughter]

Final one: What’s the most embarrassing thing that’s happened to you?

Jacobson: I fell up the stars of my synagogue once, like in the auditorium. [Laughter]

Thanks for playing! So now that your fame is rising, how do you manage to stay focused on the work and not get caught up in the trappings of success?

Jacobson: Sure, I’ve gotten more Twitter followers, but to be honest, I don’t feel like much has changed. Sometimes I forget what’s going on. I mean, we still go into the editing bay and into work normally. My day-to-day life really isn’t that much different.

Glazer: One thing is there’s a lot of work to be done, so that makes it easy to not get caught up. Secondly, we come from the NYC comedy community where you have a support group both professionally and personally. We have special people around us like you, Jon [Robinson’s boyfriend], our family, our friends. Like Jon. My favorite thing is when he calls me an idiot after I make a joke that’s so dumb and we’re just laughing then he calls me an idiot. The people who can call me an idiot like that are the people I want to keep around.

Let’s talk about the show some more. What’s been your favorite episode from this season?

Jacobson: Mine is split between “Fattest Asses” and “Pussy Weed.” They’re fun for me because my character gets crazy.

Glazer: I really, really, really do love them all like children. I really love the finale. It’s so good and a confident episode. The audience knows us and we take liberties because of that. I’m excited about people seeing that.

Can you give a couple of hints at the rest of the season and the finale, if possible.

Jacobson: The rest of the season is all over the place. We tried to make each episode totally different. You’ll see more of the city. We break away from more of the typical episode format. We have some amazing guest stars. As for the finale, I’ll say that it’s Abbi’s birthday and we see this different part of New York, old wealth, that the two girls don’t run into that often on the show.

Phoebe Robinson is a New York City comedian and creator of Blaria.com. 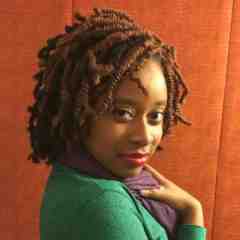 I've never seen one of their webisodes (honestly, i didn't even know they had a web-show until a last week) but the ads for the CC show were everywhere and I instantly knew that i had to see this show. I found it on demand and got caught up in one night. I see a lot of myself in Abbi, it's actually a little scary! These women kick ass so hard it's not even funny. Props to them for getting picked up for another season!

Relevant: 5 Reasons You Should Be Watching Comedy Central’s “Broad City"

Broad City started out as a web series created by and starring real-life pals and very funny ladies Abbi...